Yakov Polyakov was a rare breed. Luckily for us, this fascinating figure also kept a diary. 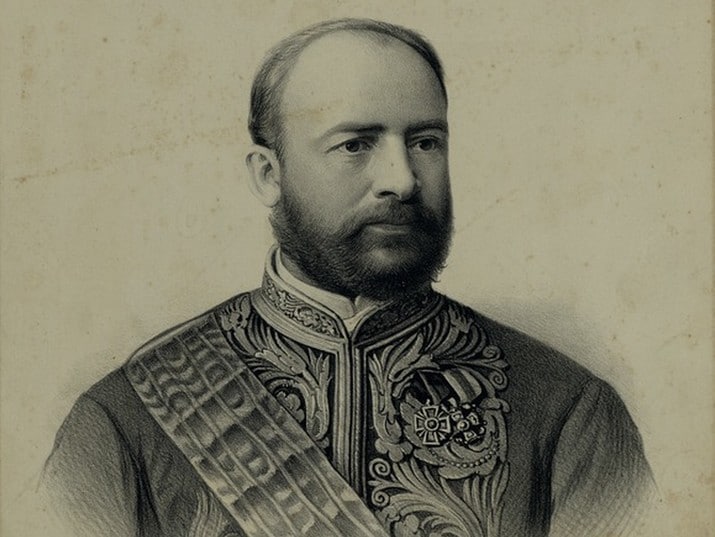 Yakov Polyakov, The Abraham Schwadron Portrait Collection at the NLI
It could easily have been a Chekhov play or a novel by Dostoyevsky – The Brothers Polyakov. Their lives certainly provided enough drama. Yakov, one of Russia’s greatest Jewish tycoons, was the oldest of the three brothers Polyakov, all prominent Russian bankers and industrialists. His diary, preserved in the Central Archives for the History of the Jewish People, was recently published online, all made possible thanks to the hard work of the volunteers of the Russian-based project “Prozhito.” Spanning forty-three years and searchable by year, this chronicle reflects the daily anxieties and joys of a wealthy Jewish businessman in 19th-century Russia. The Brothers Polyakov The Polyakov family originated in the shtetl of Dubrovno (today’s Belarus), to which Yakov’s grandfather had moved from Poland in 1783. Hence the name “Polyakov”- the Russified version of the Jewish family name “Polyak,” meaning Pole. The three brothers spread throughout Russia: Samuil lived in St. Petersburg, Lazar in Moscow, and Yakov in distant Taganrog, where he represented the Polyakov’s interests in the south. Yakov’s diary meticulously notes his trips, meetings, and family matters. Though his records are often short and sketchy, with many featuring no more than one line, they number more than four thousand entries. Polyakov’s Russian is somewhat clumsy and grammatically problematic. One of his jottings explains why:

“As soon as we moved from Dubrovna to Orsha, Mother set about organizing our schooling and education at home. This was quite unusual for the time, as there was nothing but heders and melamdim, and nobody had any thought or hope of learning even the slightest Russian or arithmetic. When we moved, I was twelve, my brother Samuil was ten, and my brother Lazar only three. Mother found a teacher who was considered highly educated and therefore not quite trusted to be religious enough (a Jewish communal requirement for every melamed).”

Yakov launched his incredible career by joining his brothers in the railway business. They supervised the construction of the Kursk-Kharkov-Sevastopol and Voronezh-Rostov lines. In 1870, Yakov opened a trading house and established a coal mine on his estate. The mine, he claimed, ended Russia’s reliance on expensive English coal to power its steamships in the Black and Azov Seas.  The Polyakov brothers subsequently founded several banks including the Azov-Don commercial bank (in St. Petersburg), Donskoy Land Bank (in Taganrog), and the St. Petersburg-Azov Commercial Bank. In the early 1890s, Yakov and Lazar branched out to Iran, building railways and investing in trade, industry, and banking under the aegis of the Russian government. As the first general consul of Persia in St. Petersburg, Yakov was inducted into the prestigious Order of the Lion and the Sun for his services to the Shah. He tried parlaying this honor into a Russian baronial title (as the famous Günzburg family had with their German baronial rank), but without success. Yakov’s diary testifies to his wealth as well as his philanthropic initiatives. In 1896 he bought his wife, Amalia, a villa in Biarritz (in the south of France, playground of Europe’s rich and famous) for 130,000 francs. Before investing in his own villa, he spearheaded the building of a synagogue in the resort, donating generously to bring the project to fruition. On Rosh Hashana eve of 1895, Yakov noted with satisfaction:

“All suited well for prayer and table. We invited Brodsky, but he arranged everything separately! Showed his wealth, what he is capable of. I donated two thousand francs for the construction of the synagogue in Biarritz. Lazar Solomonovich also donated two thousand, Brodsky three thousand, so the beginning is set. May God help finish it!”

The synagogue was inaugurated in August 1904. Persecuted Tycoons Despite Yakov’s wealth, his actions were in some ways as limited as Russian Jewry’s as a whole. When his parents lost their sight and needed daily assistance, he couldn’t get permits for relatives to come live with them in Moscow:

“Unfortunately, the assistants for Father weren’t given permission [to reside with him]. It’s painful to see [my parents] disabled. Mother is completely blind. Father is partially blind. And they cannot have two of their kin look after them? It hurts, but what can be done?”

Five years earlier, all Jewish craftsmen were expelled from Moscow. That Passover, Yakov called the decree “[…] woeful for the Jews. All the newspapers are cruelly exaggerating, ridiculing, and defaming [them], happy to see [Jews] thrown out onto the streets.” Yet there were bright spots too. In late 1897, despite rising anti-Semitism, Yakov and Lazar were awarded hereditary noble titles, making them one of Russia’s very few noble Jewish families. Their relatives in the countryside, however, still couldn’t leave the Pale of Settlement. Russian Jewish life was in constant flux, with changing regulations constantly making their lives more difficult until the revolution of February 1917. The provisional government that replaced the monarchy finally abolished all anti-Jewish laws making Jews equal citizens. On the Brink Yakov’s business practices were criticized – perhaps sometimes deservedly – but there were also anti-Semitic outbursts. The following citation, from a note on Yakov Polyakov and the Jews of southern Russia received by the state comptroller’s office in the late 1880’s:

“The Jews of the Pryazovye district [straddling Ukraine and Russia’s Rostov Oblast], which has always been full of Greeks and Armenians, could never engage permanently in any trade but alcohol, until the Jew Ya. S. Polyakov arrived there to build the Kharkov-Azov and Voronezh-Rostov railroads. Having constructed these railroads in ramshackle fashion using government-guaranteed bonds, this Polyakov remains the owner of the entire stock (also government-guaranteed) of both railroads, making him their true master […]. Along with Polyakov, his many relatives and masses of Jews came to the region and settled there, exploiting his protection for a variety of geschefts [funny business] and tricks at the locals’ expense, all while evading our every law restricting Jewish rights.”

Considering their modest background, the brothers Polyakov achieved a great deal. Samuil died young, leaving his family a substantial inheritance. Yakov and Lazar, however, lost most of their fortunes in Russia’s economic crisis at the turn of the 20th century. Yakov spent his final years in Biarritz until his death in 1909. His two daughters, who lived in his French residence after his death, perished in the Holocaust. Special thanks to Olga Lempert for translating the diary entries from Russian to English.  This post was originally published in Segula, The Jewish History Magazine, Issue 97, June 2018.