The letter addressed to her brother George was written in English to ensure it would pass through the British military censors. 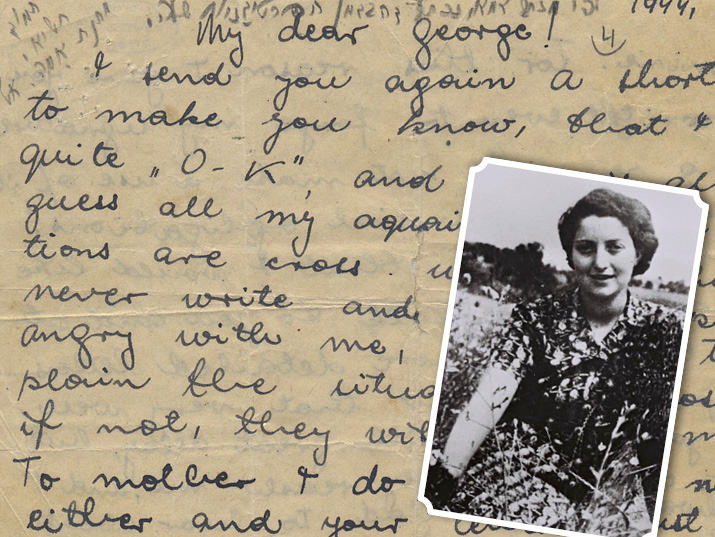 I send to you again a short letter to make you know, that we are quite ‘O-K,’ and that’s all. I guess all my acquaintances and relations are cross with me, that I never wrote and are perhaps even angry with me. Please try to explain the situation, if possible, if not they will forgive me later.

To mother I do not write now either and your letters must replace the mine. For this reason, I give you the right even to forge my signature, hoping you will not use it for “high financial obligations.”

No use writing that I would like to see you, to talk to you and at least to write more detailed letters. I hope you know that very well, and I get your letters with great delay but sooner or later they reach me, and I am always ever so glad to hear about you. Thousand kisses to you and warm greetings to your friends from home.

On May 20th, 1944, the Jewish paratrooper Hannah Senesh found herself in Croatia, not far from the Hungarian border. Two months earlier she had been parachuted into the region by the British Royal Air Force, in a desperate attempt to save Jews of neighboring Hungary from the Nazi death camps. On this day, Hannah Senesh sat down to write what would become the last letter she ever sent to her beloved brother George. At the time of writing, she had joined up with a group of local partisan resistance fighters.

In just a few short weeks, they would be be captured and tortured by Hungarian forces loyal to the Nazi regime. Six months later, Hannah would be executed by firing squad.

Hannah Senesh’s last letter was written in English. This was because all letters were required to go through the British army censor before they were sent on to their intended recipients. Senesh wanted to be sure the letter would be approved without any issues so that it would make it to her brother.

Hannah Senesh was executed on November 7, 1944.