Hugo Preuss is still considered to be the “father” of the constitution of the Weimar Republic today. 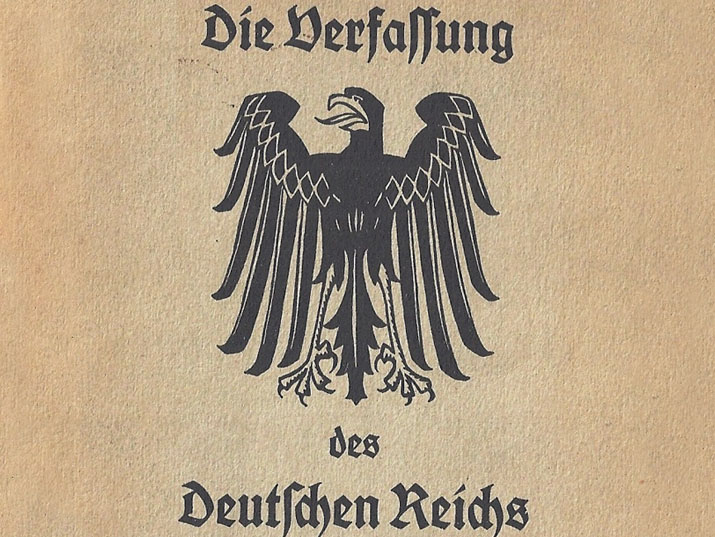 From the National Library of Israel collections.

The assembly of the German people that gathered in the city of Weimar included a special committee for drafting a new constitution. Members of the committee were jurists with expertise in constitutional law and legislation.

The committee’s discussions continued for a number of months until the new constitution was approved by the general assembly in Weimar on August 11, 1919. One of the permanent members of this committee who also served as its chairman for several months was the Jewish lawyer Hugo Preuss (1860-1925). His contribution was so great that today he is considered the “father” of the constitution of the Weimar Republic.

Preuss presented the first draft of this important text and considerable portions of it became part of the final version approved by the representatives of the general assembly. For the first time in German history, a constitution was passed that included basic civil rights.

Among the many innovations that Preuss suggested in his draft was a new internal division of Germany, necessitating the dismantling of Germany’s historical states, including the largest state of Prussia. This suggestion was unacceptable to the more conservative assembly representatives – though it seems to have anticipated the future since the idea was carried out in the prevailing political reality after 1945 with the founding of the new German state.

Hugo Preuss was born in Berlin to a family of merchants, studied law in Berlin and Heidelberg, and completed his doctorate at the university in Göttingen. He decided to devote himself to academic research and joined the faculty of the University of Berlin as a “private lecturer” (a special status of senior lecturer without a position but with teaching obligations). He remained in this position for 15 years since Jews were not awarded the status of professor unless they agreed to convert to Christianity. While conversion was not a formal legal requirement, in the minds of German academics it was still required. Only with the establishment of a private trade school in Berlin in 1906 was Preuss hired as a professor of law.

Beginning in 1895, Hugo Preuss became a member of the Berlin City Council. In 1918 he became one of the founders of the German Democratic Party DDP. From 1919 to his death, Preuss was a member of the Prussian parliament. He also served as Interior Minister of the Weimar Republic. He resigned from this post in protest when Germany signed the Treaty of Versailles. In this treaty, Germany relinquished its sovereignty in certain areas and committed to paying hefty reparations to the Allies. Preuss’ resignation as minister brought about an absurd situation: the signature of this brilliant jurist does not appear at the bottom of the constitutional text despite the fact that most of it was his brainchild, as the constitution was approved only after he had stepped down.

Ultimately, it should be recalled, Hitler established his reign of terror based on Article 48 of the Weimar Constitution, which enabled the revocation of basic civil rights as well as human rights when state security was at risk, a provision that the Nazis exploited for their own interests.