Years before Eichmann was brought to Israel to stand trial, the notorious mass-murderer visited Mandatory Palestine in 1937 while disguised as a journalist. 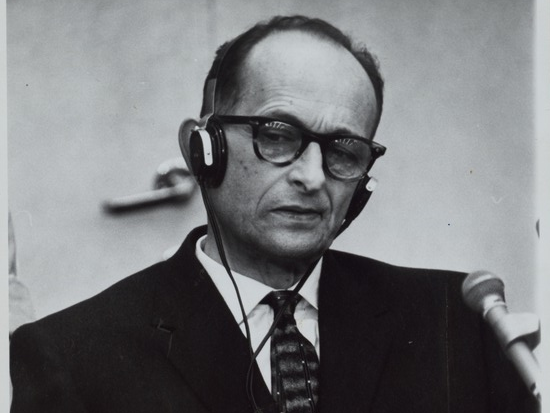 In 1937, years before he became one of Nazi Germany’s most notorious mass-murderers, Adolf Eichmann visited Mandatory Palestine undercover as a German journalist. Eichmann’s second visit, twenty-four years later, was organized for him courtesy of the Israeli Mossad.

What was Eichmann hoping to find in Palestine before the start of the Second World War? Why was it important for him to see the Jewish yishuv with his own eyes? And the last and most frightening question of all: what conclusion did Eichmann draw from his visit? The answers to these questions are discussed below.

Long before the “Final Solution” was conceived at the Wannsee Conference, Hitler and the upper echelon of the Nazi regime had hoped to resolve the “Jewish problem” through forced emigration of the Jews living in Germany. Almost three years before the outbreak of World War II, in 1937, a nondescript German bureaucrat by the name of Adolf Eichmann was sent on a covert visit to Mandatory Palestine, together with his direct supervisor in the Nazi party’s intelligence service (the notorious SD), in order to explore the possibility of deporting Germany’s Jews to the region.

A clandestine meeting had taken place in Berlin between Eichmann and Feivel Polkes, an unofficial representative of the Haganah, one of the precursors of the Israel Defense Forces. They discussed the possibility of shipping off the persecuted Jews from Germany to Palestine. The Nazi officer wanted to see the Jewish community in Palestine for himself and to personally examine whether the plan was actually feasible.

On October 2nd, 1937 the Romania docked at the port of Haifa, carrying the two Nazi officials who travelled incognito, disguised as a German journalist and a student. Their application to properly enter the country was denied by the Mandatory authorities. It is not clear whether the two had been identified or whether their entry permits had aroused the suspicion of the customs officials. In any event, they were given a temporary entry permit for one night only. Disappointed by the failure of their mission, the two toured Haifa and spent the night on Mount Carmel. After the time they were allotted was up, they sailed for Egypt where they met with Mufti Amin al-Husseini and the representative of the Haganah.

Even though the two Nazi representatives had been within the borders of Palestine for less than a day, Adolf Eichmann considered himself a qualified expert on the future of the state-in-the-making. In a detailed report to his superiors, Eichmann wrote that the economic situation of the Jewish settlement was dire, and it did not appear that it would improve any time soon. He did not tie the difficult situation to either geopolitical or material conditions but (as befitting a good Nazi) blamed it on the Jews’ devious and destructive nature – they had to settle for cheating each other as there were no Aryans around to cheat instead.

​Eichmann’s great fear was that the expulsion of the Jews from Germany would contribute in the future to the establishment of a stronger and prosperous Jewish entity that would rely on the great wealth which the deportees would bring with them to Palestine. Eichmann feared that over time, that same Jewish state would become a threat to Nazi Germany.

Eventually, the outbreak of the Arab revolt and the opposition of the regional Arab leadership to forced Jewish emigration put the kibosh on the plan. The fact that the British were working to limit Jewish immigration to the Land of Israel, even stopping it completely with the start of the war, had not helped matters.

Following the crushing defeat of Nazi Germany, Eichmann, who by then had become one of the primary architects responsible for the Holocaust, was captured by US forces. With help from his old friends he was able to escape the POW camp under a false identity and make his way to Argentina. In 1960, the Mossad discovered his whereabouts, abducted him and brought him to the State of Israel to face justice. Following a long trial, he was convicted and sentenced to death. In the early morning hours of June 1st, 1962, he was executed by the Jewish State, whose establishment he had feared even before the war.

“Burn them, as my world and everything I loved burned in Auschwitz’s crematorium”

The Labor Dispute that Nearly Halted the Eichmann Trial