​One of the most despicable books in human history ever published is Mein Kampf. This is the story of Sein Kampf (His Struggle, An Answer to Hitler), and the woman who wrote it. 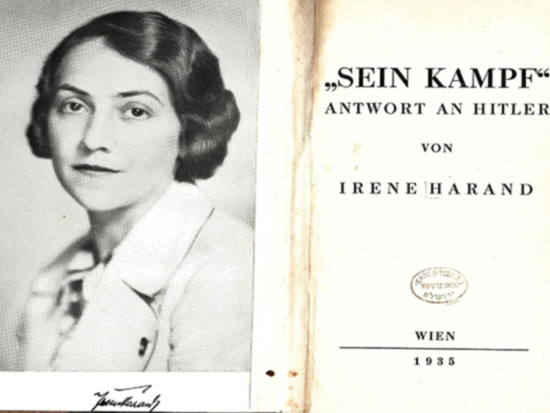 Portrait of Irene Harand beside the German title of "His Struggle"

In 1935, an obscure book was published in Austria titled Sein Kampf (His Struggle, an Answer to Hitler). The author, Irene Harand, went through Hitler’s Mein Kampf (My Struggle) and tore to shreds the book’s antisemitic claims, allegations, and ideology which swept through Germany and Austria from the time of its first publication in 1925.

Harand’s book, translated into English in 1937, is full of refutations of the antisemitic libels which Hitler used liberally in Mein Kampf. Harand rips into “The Protocols of the Elders of Zion”:

The text of the Protocols from beginning to end is nothing but a mess of lies and forgeries.

Any reflective individual who reads the Protocols will see at first glance that they are criminal fantasies of the worst order, and that the Jews have had no possible connection with them. The Nazis cannot Produce one iota of evidence that they are authentic. (pg. 175.)

Harand also attacks the idea that Jews are without a culture of their own and infiltrate societies for the sake of their own self-preservation:

Hitler maintains that the Jews never possessed a culture of their own, but always borrowed their intellectual substance from other peoples.

These Hitlerian comments on cowardice, lack of idealism and self-sacrifice in the Jews are totally devoid of any truth. (pg. 118.)

Harand, a Catholic Austrian, had no qualms about bringing to the forefront the ways that Christianity itself drove antisemitic ideas – ideas that became entrenched outside of religion and into social bias regarding Jewish people. She deconstructed these ideas throughout her book Sein Kampf in clear and easy language, giving examples, and exposing the fabrications of stereotypes and lies.

Between 1933 and the annexation of Austria by Nazi Germany in 1938, Irene Harand worked tirelessly and endlessly against the antisemitic incitement that swept through Austria after Hitler’s rise to power. She became a thorn in the side of the Austrian Nazi party for her activism and efforts to denounce Nazism and antisemitism.

Part of Irene Harand’s activism included a lecture circuit that took her all over Europe. During the Anschluss she happened to be in England. It was then that she decided against returning to Austria and ultimately immigrated to the United States where she used her connections to provide visas for over 100 Austrian Jews, helping them escape from the hands of the Nazis.

In 1968 Yad Vashem recognized Irene Harand as Righteous Among the Nations.

This article was written with the help Dr. Stefan Litt of the Archives Department of the National Library.