When the Nazis Desecrated the Jewish Cemetery of Salonika

Human bones and broken tombstones were used as building materials, desecrating 500 years of Jewish history and half a million gravestones. 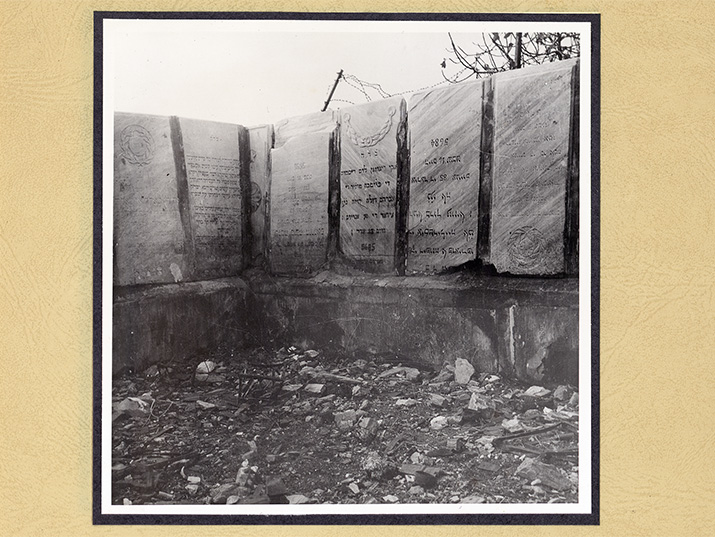 A swimming pool for Wehrmacht soldiers made out of Jewish tombstones

The Jewish cemetery of Salonika (also known as Thessaloniki) was an anchor of the long standing Jewish community of that city, the largest Jewish community in Greece before the Holocaust. The cemetery was established at the end of the 15th-century, when Jews expelled from Spain and Portugal arrived in Greece. The Jews who survived the expulsion and the long journey, buried their dead in a plot of land that would become the Jewish cemetery of Salonika, as precious and important to the community as their synagogues.

The process of expropriating the land belonging to the cemetery did not begin with the Nazis.

Decades prior to the Nazi occupation, the non-Jewish residents of Salonika sought to take the land and use it for their own benefit. In 1886 a Turkish Ottoman gymnasium was established on the cemetery ground and famously, the Aristotle University of Thessaloniki was founded in 1925. The university took over from the gymnasium when Greece gained independence. In the 1930s the city administration officially decreed that the Jewish cemetery would be expropriated and given to the expanding Aristotle University. The plan never came into effect, but fear of demolishment motivated the Jewish community to give the university a section of unused cemetery ground.

In 1941 the Nazis came, and with them, total destruction of the Jewish cemetery.

By the end of 1942 cemetery grounds were confiscated by the city’s administration, which was controlled by the Nazi occupiers. A Jewish family who had relatives buried there and wished to have the grave exhumed was forced to do so through the city administration. In December of 1942 the city pushed for a quick demolishment and within days gravestones were destroyed and human bones were gathered in unmarked piles. When the Jewish community heard of what had occurred it was too late. All they could do was take the remains of their family members and re-bury them in a mass grave, outside the city of Salonika.

The desecration of the dead was part of the Nazis plan to dehumanize the living. With the destruction of the Jewish cemetery, the Germans swiftly began transporting the Jews of Salonika to the death camps.

Fifty thousand of Salonika’s Jews were murdered in the Holocaust, 96 percent of the city’s Jewish community perished.

When the survivors returned they found that the broken tombstones were used to build pools for Wehrmacht soldiers, pave the streets of the city, and even rebuild Greek churches that were harmed in the war. They took photographs, documenting the destruction and desecration and demanding compensation from the newly liberated Greek government, to no avail.

The Jewish cemetery of Salonika was a victim of modernization and city development as well as anti-Semitism and Nazism. The photos taken by the survivors were put together as an album, a testament to what had occurred to the living and the dead during the Nazi occupation and the Holocaust. The album was donated to the National Library of Israel in 1949 by Rabbi Michael Molho.

Along with the remaining Jewish community, Rabbi Molho founded the Institute for the Research of the Jews of Thessaloniki, which operates to this day.