Not Traveling? Visit Stunning Jewish Sites Across Poland from Home

Visitors of all ages can now virtually explore 3D Jewish heritage sites - from the extravagant to the mundane... 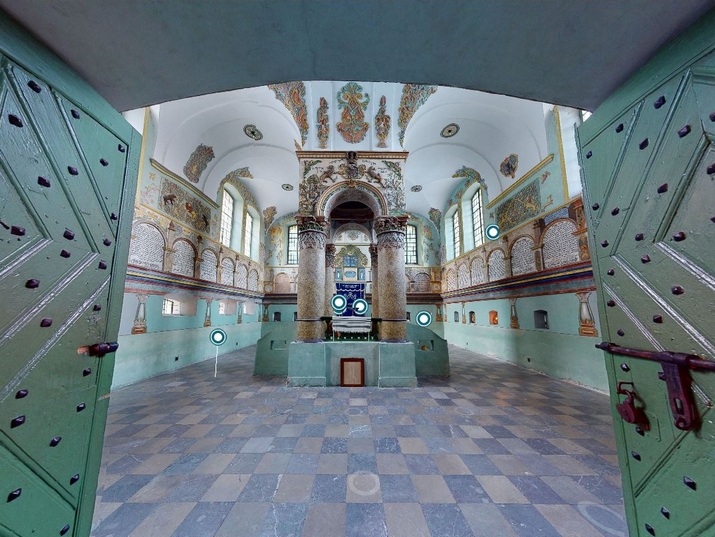 “How?” I asked my daughter, once again in government-mandated quarantine after a girl in her class tested positive for COVID.

It took me a minute to realize that she hadn’t meant leaving our Jerusalem apartment, but rather leaving a synagogue in some Polish town with one too many consecutive vowels for our tongues to handle…

In just a few minutes, she had “wirtually” toured a number of them… in 3D.

The stunningly-colored engravings of the synagogue in Łańcut (Lancut) enraptured her eight year-old mind.

As did the overgrown yard of the synagogue in Leczna, and the reconstructed ruins of the house of prayer in Przysucha.

From seemingly sprawling campuses to simple shtetl structures, all of the places she visited are part of  “Virtual Connections to Material Jewish Heritage in Poland,” a new initiative of the Foundation for the Preservation of Jewish Heritage in Poland, which aims to open broader access to some of the countless Jewish heritage sites across Poland and facilitate discourse around them. The project was financed by Poland’s Ministry of Foreign Affairs, within the context of a grant competition entitled “Public Diplomacy 2021”.

The peeling frescos revealing crumbling red bricks inside the Krasnik Synagogue spooked her.

There was one thing, though, which interested her as much as the reconstructed relics of Jewish heritage, and perhaps more. The Polish woman doing something on a balcony across the street – unknowingly captured on film – fascinated her almost to no end.

She felt a need to investigate the woman further. Said something about telling her friends. Couldn’t quite zoom in enough to satisfy her interests.

In that, too, there’s something meaningful, ironic and lovely.

Then she moved on to other destinations, continuing her tour of rural Poland from my laptop.

Special icons embedded into the tours enable visitors to learn more about some of the structures’ features, as well as the communities they once served.

As opposed to Zamosc, the town of Olsztyn had a relatively young and small Jewish community, which topped out at less than 500 Jews in the 1930s. Its most famous Jewish son, notable architect Erich Mendelssohn, designed the structure that now bears his name and can be visited virtually online through the project: the town’s “Beit Tahara” – the building used to prepare Jewish bodies for burial.

Mendelssohn would go on to design notable buildings throughout Germany and beyond.

After fleeing the Nazis, he left his architectural imprint around the globe, including many landmarks in Jerusalem, not far from the home of a curious schoolchild, who – for at least one horizon-expanding afternoon – was able to embark on a tour of otherwise unknown historical sites, if only “wirtually”.