Only at the gates of Auschwitz did 'vivacious brunette' Hedwig Bernhard let go of the gift she received from Rainer Maria Rilke... 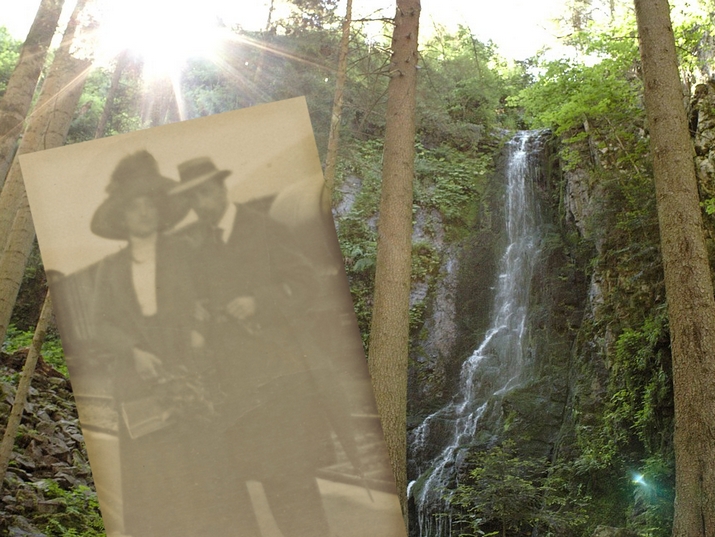 “...a friendship developed in walks along narrow trails through the forest…" Composite image of the Burgbach Waterfall near Bad Rippoldsau, where Bernhard and Rilke first met, and the only known photo of the couple (Sources: Alexander Migl [CC-BY-SA 4.0] / Deutsches Literaturarchiv, Marbach, Germany)

An early disciple of Sigmund Freud, Dr. Max Eitingon founded the first psychoanalytic institute and clinic in Berlin. Following his death in 1943, most of Eitingon’s renowned collection of books came to the Jewish National and University Library (today’s National Library of Israel) in Jerusalem, where he had fled following the Nazi rise to power.

One of these books, Das Buch der Bilder (The Book of Images), was one of several works in Eitingon’s collection by Rainer Maria Rilke, a major celebrity of his day and one of the 20th century’s most popular poets.

Eitingon’s path crossed with Rilke’s after the poet’s erstwhile lover and lifelong mentor, the Russian-born writer Lou Andreas-Salomé, attended  a gathering of the International Psychoanalytic Association in 1911. She went on to study with Freud, soon began to practice analysis herself, and brought Rilke with her to the following psychoanalytic congress two years later. But Rilke – despite his recurring bouts of depression – rebuffed her entreaties to be analyzed.

Some three decades later, a copy of Das Buch der Bilder was found at the gates of Auschwitz. It had an inscription from Rilke to another woman, who had been a patient of Eitingon’s. The book was picked up by a guard and its postwar discovery caused a stir, yet little attention was paid to the woman’s own tragic story.

Hedwig Bernhard, the daughter of a wealthy Jewish merchant in Berlin, was mentally unstable enough for her parents to engage a companion-cum-minder.

Shortly before her 25th birthday, Hedwig Bernhard and her chaperone checked into the same hotel that Rilke was patronizing to overcome his own chronic depression and writer’s block.

Rilke and Bernhard had both taken to the waters at Bad Rippoldsau in the Black Forest to help assuage their ailments.

According to Rilke’s biographer Ralph Freedman, she was “a vivacious brunette with a flush of youth but with a kind of searching introspection and sensibility that anxiously reached out to him.” Her self-introduction as an actress “on holiday from her work with the Luisentheater in Berlin” appears throughout the vast number of works on Rilke. She presents herself as an actress in a 1935 letter sent to Martin Buber, yet there is little to no other evidence of her playing on any professional stage. 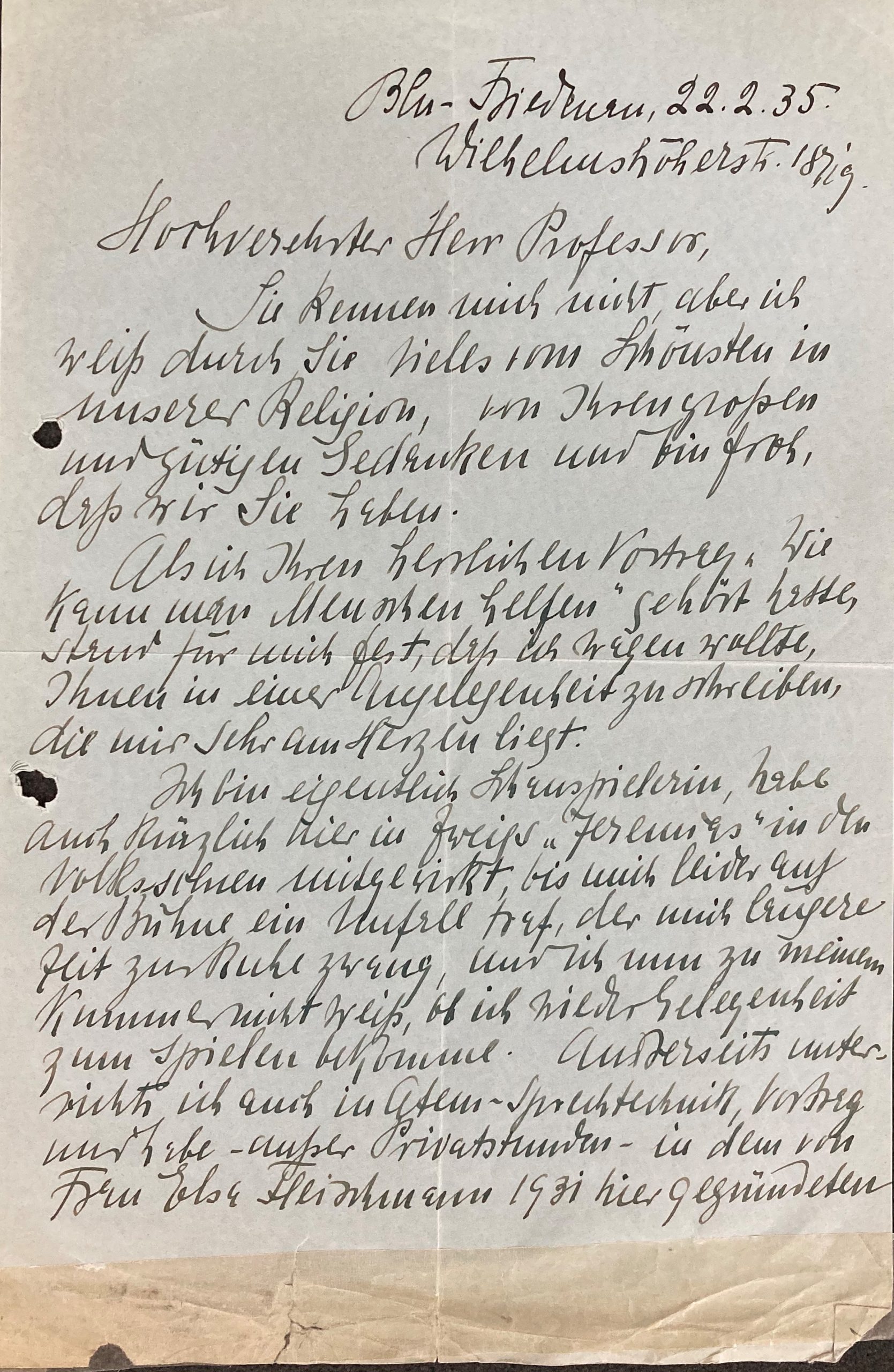 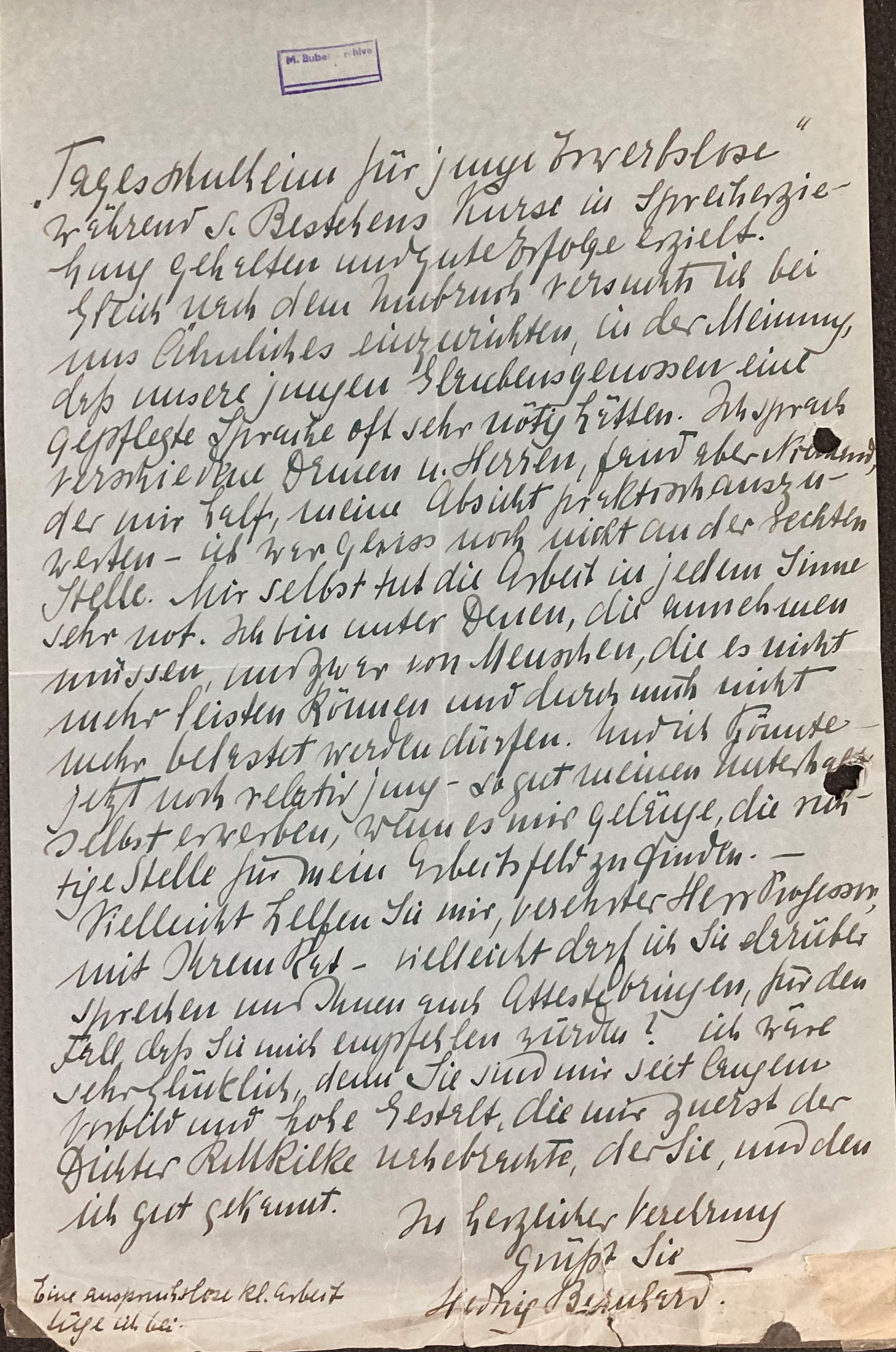 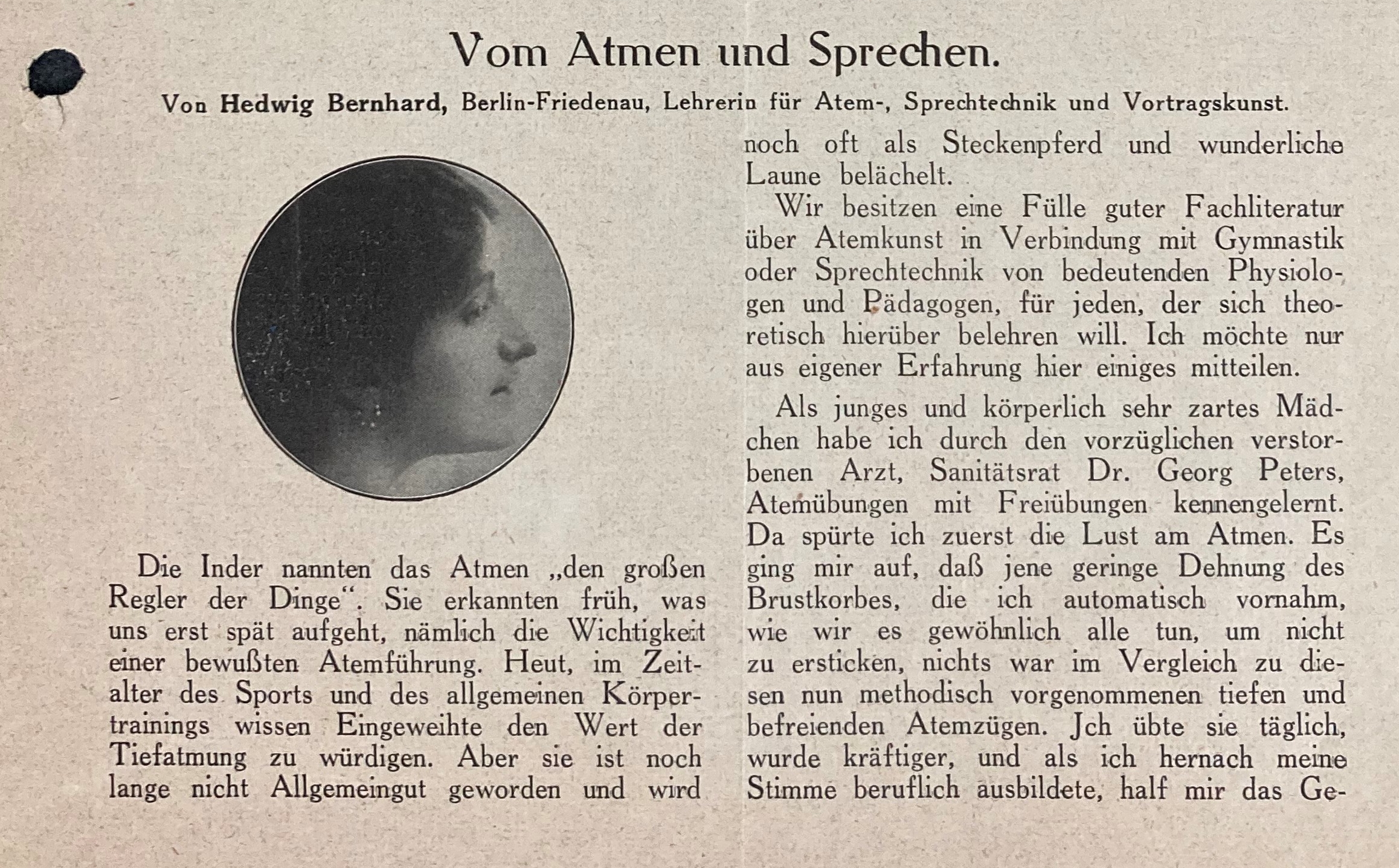 The Berlin-born physician Theodor Zondek, whose mother was Bernhard’s “lifelong friend,” would reminisce delicately that Bernhard “studied to be an actress but did not follow this career for various reasons” and “decided after an illness to visit a spa.”

According to Rilke’s biography:

“…a friendship developed in walks along narrow trails through the forest… In her diary Bernhard became eloquent about his soft, melodic voice, his small, fragile figure, his high forehead, and especially his eyes, which she compared to ‘two large, clear blue lakes’.”

Rilke scholars have debated whether Bernhard was for him one of numerous “muses,” or no more than a Kurschatten (spa shadow) – an ephemeral liaison so common at the time that it was “recognized as promoting the cure.”

During their last night together, Rilke inscribed two volumes of his poetry to Hedwig, adding new, handwritten poems that progressed in intimacy from “Sie” to “Du“.  On their walks, Bernhard had taken several excellent photos of Rilke. When he saw her off at the railway station, she apparently asked a less adept bystander to take a picture of them together. The resulting blurry photo is one of the only surviving images of Bernhard.

Rilke wrote to her for several months – even asking her for copies of the photos to give away to others. But his interest waned. In May 1914, with Bernhard not (yet) willing to undergo analysis, Max wrote to his wife Mirra:

“die Bernhard is melancholy…  I have to find a way to get [her] moving somehow.”

That August, World War I broke out.

Rilke’s publisher rushed a Kriegsalmanach for 1915 into print and it became an instant bestseller, featuring five new “chants” by Rilke, “invoking the Kriegs-Gott and calling for a banner of jubilant suffering to be raised.”

Eitingon, an Austrian citizen like Rilke, had volunteered as a medical officer, and Bernhard sent him a copy (“how friendly of her!” he wrote to his wife Mirra). Unfortunately, it was ruined by stains from the holiday fruitcake that she packed in the same parcel.

Believing Rilke’s affection would last, she surprised him at another spa. But he was already involved with the next of his many “muses,” and stopped writing to her.

Hedwig’s mental state deteriorated and she called on Mirra to inquire about Max, who was away at war.

A letter Bernhard wrote to him still reflected Rilke’s attitude to Freudianism: Max reported indignantly to Mirra that Bernhard asked “whether in my wartime medical activity I had not learned to think differently about [psycho]analysis!” The question touched a sore spot for Eitingon, who had found no scope for analysis while treating battlefield injuries in his field hospital. But Hedwig soon sent “a disguised apology for her question,” which Max gallantly accepted: “of course I know well enough the expressions of ‘resistance’ [to analysis].”

He could but lament Bernhard’s “regrets that now, when she has become ripe for analysis, the doctor is not there.” As all military mail was reviewed by the censors, he added discreetly, “…the hopelessness of her relationship with R— e compounds Miss B’s condition.”

Hedwig regularly visited Mirra Eitingon, who could not but have felt some empathy. Seven years earlier, her own promising career as an actress in Russia and her previous marriage had been derailed by a doomed affair with a famous writer.

It had plunged her into depression, for which she was referred to Dr. Eitingon. A passionate romance at another Black Forest spa soon developed between Max and Mirra.

Now Max “agreed entirely” with his wife’s intuitive ideas of how to support Bernhard. “Mirrinka,” he lapsed into their common Russian mother tongue, “follow the course of your heart, always tell her when something warm swells up in you while facing her. She is so receptive to it!”

Still, Eitingon could not bring himself to blame Rilke for Bernhard’s plight:

“This wonderful person… understood the great, boundless lovers among women so well… he must be powerless against such great hardship [as Bernhard’s], and must suffer painfully himself.”

A few weeks later, Mirra joined Max at the front as a volunteer nurse.  Whether or not the Eitingons might have helped Bernhard overcome her fixation on Rilke, she never emerged from the obsessive neurosis that Max diagnosed (remotely) as “a cage, of which the iron bars grow inward through the prisoner.”

Bernhard ended her diary upon Rilke’s death in 1926, and published some of it in an Austrian newspaper on what would have been his 57th birthday.

In the July 1976 issue of the Association of Jewish Refugees in Great Britain’s newsletter, her friend’s son, Dr. Zondek, recalled that:

“Hedwig Bernhard was a personality whom it is very difficult to forget… She often told us about these meetings [with Rilke] in her impressive way… She produced a box which contained a large number of letters from Rilke… they were her greatest treasure.”

Nearly a decade after Rilke’s death, in her 1935 letter to Martin Buber, she asks for the famous philosopher’s help promoting her oration classes, especially following the rise of the Nazis to power. At the end of the letter, she mentions that it was Rilke who introduced her to Buber’s work.

Little is know of her “theatrical career” or the rest of her life beyond an August 1936 advertisement in the Berlin-based Jewish paper, Jüdische Kulturbund Monatsblatter:

“Hedwig Bernhard, actress and excellent speaker, gives courses in breathing technique and elocution at her home.”

Before her deportation to Auschwitz in 1944, Bernhard entrusted to a non-Jewish friend the letters, diary and Rilke’s gift of a silk scarf.

She kept the books Rilke dedicated to her on her person until the threshold of the gas chamber. Together with some of his letters to her, they wound up in the German Literature Archive at Marbach.