How a group of anti-Dreyfusards channeled their anger into the creation of one of the world's most popular sporting events, centered on a new invention: the bicycle. 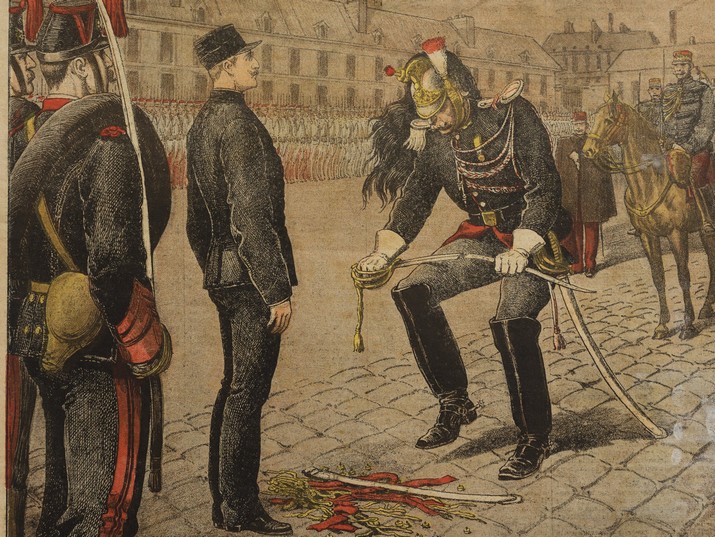 Alfred Dreyfus is stripped of his ranks, La Petite Journal, January, 1895. From the collections of the National Library of Israel

This is the story of a footnote to two major events in French history – the Dreyfus Affair and the introduction of the world’s greatest bicycle race, the Tour de France, that briefly, and ever so slightly intersected in June of 1899.

Following a humiliating defeat in the Franco-Prussian war in 1870, the French Third Rebublic placed its focus on the rebuilding of national pride – Revanchism.

The newly invented bicycle quickly became a symbol of health, fitness, and modernity, and a national obsession with cycling saw races taking place all over the country by the 1890s. The insatiable appetite for cycling meant an increase in the desire for news about the sport while manufacturers of bicycles and cycling components made use of the media for advertising purposes. Competing newspapers set up races to promote themselves.

In many senses the Third Republic was progressive but it was also beset by crises. One of these, the Panama Canal scandal, fostered growth in antisemitism since two of the businessmen at the center of it, and upon whom the patriotic press focused, were German Jews. This brought monarchists into conflict with Republicans, and Catholics into conflict with secularists – antagonisms that continued with the Dreyfus Affair. Throughout the nineteenth-century Jews enjoyed a degree of emancipation and political and commercial influence, thus feeding the antisemitic “international-Jewish-lobby” trope.

Four years after Dreyfus’s original conviction based on concocted evidence, the affair rumbled on.  The real culprit, Major Ferdinand Walsin Esterhazy, had been identified but was quickly cleared by a military court determined to hold tight to the army’s position and avoid humiliation. By the time Emile Zola’s “J’Accuse” article was published, the country was deeply split between those who were for and those who were against Dreyfus.

On February 16, 1899, French President Felix Faure suffered a brain hemorrhage while in the arms of his Jewish mistress, Marguerite Steinheil. His sudden death presented an opportunity for the Dreyfusards as Faure was succeeded by Emile Loubet, a left-leaning senator from humble origins who was very much a friend of the underdog. He was popular enough with other members of the national assembly to easily beat his opponent for the Presidency, but not universally popular across the riven nation; Loubet was seen as an enemy of the anti-Dreyfusards because he supported reviews of the trials of Dreyfus and Esterhazy.

On June 3, 1899, the Supreme Court overturned the original court-martial judgment against Dreyfus and ordered a retrial. Tensions were high when, the following day, Loubet accepted an invitation to watch horse-racing at the Auteuil Race Course.

Unlike the Longchamp racecourse which was frequented by the lower classes, and therefore Loubet’s core support, Auteuil was the playground of the wealthy, monarchist, anti-Republican and mainly anti-Dreyfusard classes. Loubet’s presence was seen as provocative and he was confronted by hordes outraged by the order for a retrial. The demonstration turned violent almost as soon as the President took his seat. Among those who were arrested following the fracas was the wealthy industrialist Jules Albert Compte de Dion.

The pugnacious de Dion had two passions – engineering and dueling.  At one point, his automobile company, De Dion Bouton, was the largest manufacturer of cars in the world.

Pierre Gifford, the editor of the Le Velo newspaper, criticized the demonstration, as did much of French society, appalled at the humiliating treatment of the President by these uncouth aristocrats.

Politically, Gifford was on the left and wrote scathing articles criticizing De Dion and other anti-Dreyfusards, despite many of them being important advertisers in his newspaper.  Gifford’s reporting of the demonstration incensed De Dion and others industrialists such as Eduard Michelin, a vigorous antisemite, and Gustave Clement.

The Le Velo newspaper which covered sport and politics, dominated the sports paper market, enabling it to command high advertising rates. It was also financially backed by the Darracq motor company – a rival automobile manufacturer to De Dion and Clement.

Giffard’s criticism following the Auteuil incident was the last straw.  The anti-Dreyfusard businessmen were already frustrated that Le Velo had a virtual monopoly and was controlled by one of their rivals. Dion and his allies decided to withdraw their advertising and to launch their own rival paper, L’Auto-Velo, under the editorship of Henri Desgrange, a man with significant experience in journalism and the world of cycling.

De Dion chose Desgrange to be his editor for his hard-headed, opinionated and autocratic style.  He left the running of the paper to Desgrange with a single instruction: to drive Le Velo out of business.

L’Auto-Velo was launched on October 16th, 1900 and was printed on yellow paper to distinguish it from the green of Le Velo, a decision that was to have lasting significance.

In November 1902, as the renamed L’Auto struggled with circulation at consistently around a quarter of that of Le Velo, Desgrange held a crisis meeting.  It was at this meeting that a young reporter by the name of Geo Lefevre, allegedly desperate to suggest something, spontaneously floated the idea of the Tour de France as a promotional enterprise.

Desgrange initially received the idea with skepticism, but after consulting his finance manager, he decided to launch the race in January of 1903. To his surprise “Le Tour” was an immediate success for the paper with circulation rising from around 25,000 to 65,000 after the first edition of the race, spelling disaster for Le Velo which ceased publication in 1904.

Desgrange stayed in charge until his death in 1940 when the paper was taken over by a German consortium.  During the war period L’Auto was not unsympathetic to the Nazis, allowing it to continue operating under the Vichy government, but after the war, it was shut down along with all other pro-German publications. From the ashes of L’Auto emerged the now popular French sports paper, L’Equipe.

So, if we look back and connect the dots, we can see that, if it wasn’t for Alfred Dreyfus and his antisemitic ordeal, there would be no Tour de France.