The Women Who Captivated Muslim Travelers of the Middle Ages 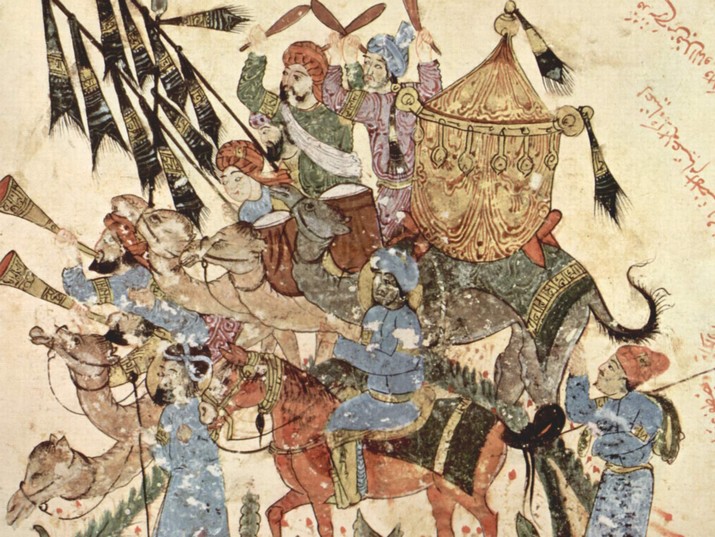 13th century illustration of pilgrims on their way to Mecca

The pilgrimage to the holy city of Mecca, called the hajj in Arabic, is one of the five central commandments in Islam. Every believing Muslim is obligated to fulfill this commandment at least once in his life. But, for Muslims in the middle ages, it was only one of many opportunities for Muslims to explore the far-reaching Muslim empires.

These empires were dominated by trade, and the imperial trade routes offered merchants and adventurers countless opportunities to leave their homes and see new places.

Among the hundreds of thousands of books and manuscripts stored in the Islam and the Middle East Collection at the National Library of Israel is a book that looks innocent enough. It title is  الرحالة المسلمون في العصور الوسطى or “Muslim Travels in the Middle Ages” tells the stories of some of these travelers and provides a glimpse into the strange and distant land they encountered on their journeys.

Among the many names in the book, the most famous is probably that of Ibn Battuta, who lived in the 14th century. The words of the renowned scholar and Muslim traveler illustrate in great detail the Muslim custom of taking an additional, local wife when one arrives in a new land. Whenever he was in a particular country for business, he would stay with his local wife (or wives). We know that Ibn Battuta had at least six different wives during his lifetime – two in Egypt and four in the Maldives. Of the women he met in the Maldives he said:

“Marriage is easy on these islands. Dowry is rare, and it is good and proper to socialize with women…they never leave their country, and I have never seen anything more beautiful in the world than these women… [here he includes a description of how these women pleasure their men] and the custom is that the woman does not eat with her husband, and that the man does not know what his wife eats.”

Another example of marriage customs is seen in the travel diary of Soleiman al-Tajir, who wrote about his travels to ninth-century India. “There is much gold there. They eat coconuts and use them to fight and draw. If any of them wants to get married he need but bring a man’s skull back from their enemies. Killing two people allows him to marry twice, and he who kills fifty will marry fifty women…”

In Morocco, North Africa, the traveler Zakariya ibn Muhammad al-Qazwini  (1203-1283) came across a city that had very different customs than any other found by previous travelers. This was the city of women. Al-Qazwini wrote, “They are women whose men do not control them. They ride horses and engage in war all on their own. They have strength and power…and they have slaves. Every servant belongs to his mistress, and they rise before the dawn.”

Muslim travelers did not only meet women on their journeys, however. Abd al-Basset tells of an encounter with a Jewish doctor he met in Algeria in the 15th century. At the end of this century, all Jews and Muslims who refused to convert to Christianity were expelled from Spain. He writes, “I needed the most skilled physician Musa Ben Samuel Ben Yehuda of Israel…I have not heard of or seen one so skillful and professional in his field as he, knowledgeable in contemporary science as well as in ancient science…he is of the Jews of Spain originally and is a great expert in the field… “

Thanks to Tehila Bigman of the National Library’s Arabic catalogue for her help in translating the excerpts and in composing this article.

The Package is Secure: How Jewish Women Were Smuggled to Safety in 19th Century Italy Meet Emilia Morpurgo: A Female Ritual Slaughterer from Italy The Scholar who Changed the Morning Blessing