Looking Back at the Jewish Soldiers of the Great War

A century after World War I, people are still surprised to learn the extent of Jewish participation in the military. 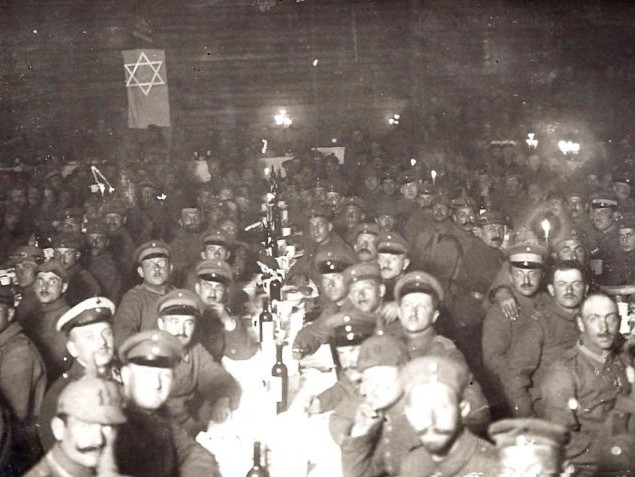 From the Felix Theilhaber Collection at the National Library of Israel.

Armistice Day 2018 marked one hundred years since the end of World War I. The centenary was commemorated with ceremonies and remembrances around the world. But Jewish involvement in the First World War is often overlooked, or even forgotten, by the general public.

Paula Kitching is the project historian, co-founder and project manager of the We Were There Too project, which chronicles Anglo-Jewish involvement in the First World War. She knows from personal experience exactly why the project is necessary.

“I would be giving tours of battlefields, and people—Jewish and gentile—would ask me why there were Stars of David on some of the graves. And I would tell them it’s because the soldier was Jewish. And they would say, Oh, I didn’t know there were Jewish soldiers who fought in World War I. And of course there were.”

We Were There Too has gathered materials from individuals and organizations to create an interactive online database, complete with archival resources, personal records, and information on past events. The project has recently expanded into the North West of England, with plans to cover the whole of Britain. “We want to show people that the First World War was diverse,” said Kitching, who has also worked on projects chronicling Anglo-Indian service in World War I. “The project started in London, but every region we’ve been to, we’ve had tremendous interest, which makes me think there really is a national, rather than regional interest.”

The First World War drastically affected the lives of all those involved, of course, but Kitching notes that for many Jewish soldiers, as with soldiers from the working classes, and other minority backgrounds including Anglo-Indian and Anglo-Irish soldiers, the war also served as a chance to prove their patriotism, their abilities, and their love for Britain. The London Metropolitan Archives (LMA) has archived Anglo-Jewish materials through their UK Jewish Community Archives program which display these sentiments in incredibly personal ways. One particularly poignant example in their collection is a letter, pictured below, written to the Chief Rabbi of Beth Din, a court of Jewish law, in 1914 from a member of London’s Jewish community affirming the congregation’s patriotic support of Britain and the War. The letter illustrates how many British Jews saw the war as a space to demonstrate their patriotism and their identity as Britons.

Kathrin Pieren, Social and Military History collections manager and curator for the Jewish Museum in London, has found similar levels of enthusiasm for information on the Jewish experience of World War I in her work with the Museum and beyond. Exhibitions on Jews in the First World War at the Museum, including a highly successful featured exhibit in 2014, have generated interest from both the public and the press and are looking to combat what Pieren calls the “knowledge gap” which led to the “nonsense” perception that Jews did not fight in World War I, nor feel the war’s impact on their lives on the home front.

Pieren also found a national, rather than a regional, interest in Jewish involvement in World War I through her own work. In giving talks on the subject in Leeds, and at the University of Chester on minority experiences during the War, she has found that both information and interest on the Jewish experience during World War I extend far beyond London and into the whole of Britain.

Jewish involvement in the war wasn’t limited to Britain, however. The website, Jewish Heritage Europe marked the centenary with a photo essay on memorials honoring fallen Jewish WWI soldiers that can be found across Europe. For a more personal perspective on the diversity of Jewish involvement, the German-Jewish archives at the University of Sussex shed light on Jewish participation in World War I from an often-overlooked perspective—a German one. The Sussex German-Jewish Archives have been cataloged and made available online at The Keep. This collection includes unique items such as war diaries from German-Jewish soldier Max Sondheimer, fighting in the Kaiser’s army in 1916, and the unpublished autobiographical novels of Selma Kahn, describing Jewish life on the German home front during the First World War and in the immediate aftermath.

The projects mentioned in this article are supported by the Rothschild Foundation Hanadiv Europe.

Read more about Jewish participation in World War I:

Life Under Fire: The Doctor Who Photographed the Destruction of World War I