Prayer books and diaries preserved at the National Library offer a glimpse of the religious challenges faced by Jewish soldiers in the armies of the First World War.

A hundred years ago, at the height of the First World War, many Jews, soldiers in the various armies, were making preparations for Rosh Hashanah and Yom Kippur. Some of the military chaplains arranged places for prayer and sent messages informing the various units, hoping that their co-religionists would be granted permission from their commanders to attend. Food was collected for the festive meals to the best of their ability, and dining rooms large enough to seat the many soldiers were located.

The Rabbis also took care of the soldiers’ spiritual needs. Shofars, prayer shawls and prayer books were provided, while sermons appropriate for the atmosphere and the season were prepared. Several items from this period can be found in the collections of the National Library of Israel.

The military chaplains did not print festival prayer books in an orderly fashion, but those that were printed included abridged versions of the festival and High Holy Day prayers. Great Britain had an organized military Rabbinate which had access to the official printing presses. In Germany, in contrast, the Rabbis usually had to take their own initiative, using the budget (or donations) they were given. Therefore, we find many editions of German prayer books, but a single standard British one.

The prayer books printed by the armies are very short compared to the prayer books we are familiar with today, and contain only the main prayers for the entire year. Only a few short pages are dedicated to the High Holy Days.

Another abridged prayer book printed leading up to Rosh Hashanah 1915, was published by the Jewish community of Hamburg, “for our Jewish soldiers”. The book begins with a special prayer written by the Rabbi of the community for success in battle, offering a blessing that “in the forthcoming year, you will be saved from the all the suffering of the previous year… we will defeat our enemies for the glory of our king.” This book does not contain prayers for the High Holy Days, but as it was published at the beginning of the new year, it contains a calendar for 5676 (1915-1916).

There were Jews who were forced to spend the festivals in prisoner of war camps. Some interesting testimonies about this appear in handwritten festival prayer books, photographs of which are preserved at the Library.

These prayer books were written according to the “Apam” rite (“Apam” or “Afam” is an acronym of the Hebrew initials of Asti, Fossano, and Moncalvo – in the Piedmont province of northern Italy) for the High Holy Days in 1673, 1704 and 1729. Inside the books are additional texts written by Jewish war captives in 1916. The writers relate that they are prisoners of war from Galicia and Bucovina who were sent to a camp in Fasano, Italy. Within the text, the prisoners record a long list of the prayer leaders for the High Holy Days and their places of origin. 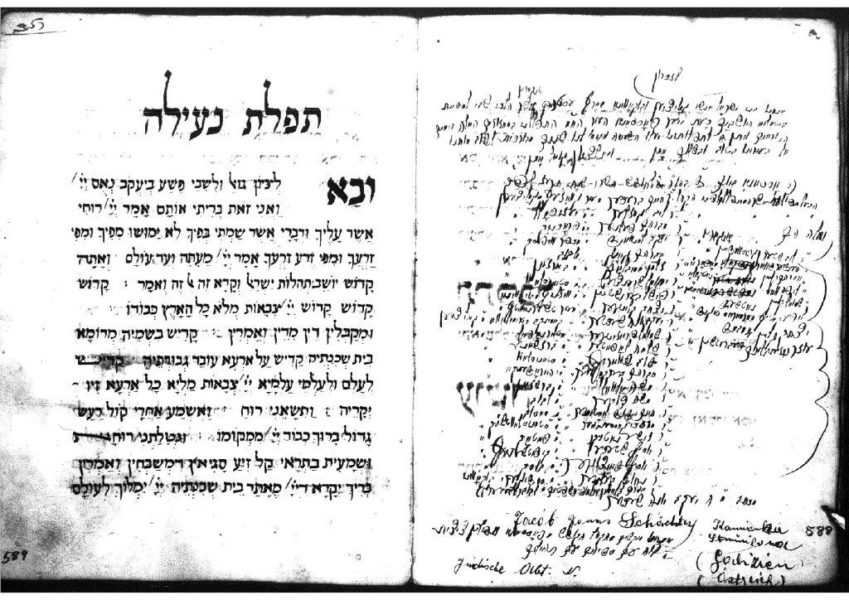 These items raise many questions, to which we have no answers: who were these Jewish prisoners of war? Soldiers in the Austro-Hungarian army or regular civilians? How did they obtain these precious handwritten prayer books? Were they unable to find printed books? How did they decide to write in (and damage) these manuscripts which did not belong to them? What is the explanation behind the recording of the event and the list of prayer leaders? Why was it so important to document a one-time event in a prayer book? This story definitely requires further in-depth research.

A year after the war, we find other Jews imprisoned over the High Holy Days – this time in an English jail in Egypt. These were Shmuel Goldstein from Jerusalem and his friend Aharon Hibler from Safed. The prayer book found in our collection of rare books was sent to Goldstein by his Rabbi, Rabbi Baruch Reuven Shlomo Jungreis, the founder of the Eidah Chareidit in Jerusalem. Similarly to the prisoners in Fossano, the two friends used the title page and inside page of the prayer book to document their stay in prison. Each of them wrote a few words separately, and wished themselves a rapid release from jail. This is what they wrote:

“The festival prayer book sent by my teacher Rabbi Baruch Reuven Shlomo Jungreis, arrived here to captivity on Tuesday 28th Elul 5679 [September 23, 1919], and as an eternal commemoration I will record my name and that of my friend, and may it be His will that we are written and signed in the book of life of the righteous, and that we celebrate the Simchat Beit Hashoeva in the Land of Israel. Shmuel Zenvil son of Alexander Goldstein from the city of Jerusalem and my friend Aharon son of Zvi Hibler.

So that you might remember the day you left the land of Egypt, not only our forefathers, but we as well, ‘for an eternal commemoration’ of the captivity in Egypt, the place our forefathers were enslaved with bricks and mortar, and in the year 5679 in captivity.”

As can be expected, the military Rabbis adapted their sermons to topics connected to current events. Several Yom Kippur and Sukkot sermons were published in 1916 in a booklet named “The Blessing of the Military Rabbi to the Jewish Comrades of the German Army” which was distributed to the soldiers. Several German military rabbis who served in the different fronts helped to put this booklet together.

The military Rabbi of the Fifth German Army was Rabbi Georg Salzberger. In his diary, he wrote that on the second day of Rosh Hashana all the soldiers were on the battlefields and he had no choice but to pray alone. In his diary, he described the story read on Rosh Hashanah, of Abraham who is prepared to sacrifice his son Isaac and how in his mind’s eye he saw all the fathers of the Jewish soldiers following in his footsteps and sending their sons to the front for the sake of Germany, while their mothers cried.

Rabbi Salzberger comforted himself and the many worshippers he felt were joining him in prayer. The sons may have been at war, but just as God promised Rachel, they would soon return: