Moving Testimony: A Prayer from the Anusim of the Communist Revolution

Home > Soviet Jewry > Moving Testimony: A Prayer from the Anusim of the Communist Revolution
Diaspora

A rare manuscript reveals that even in the midst of Soviet oppression there were Jews who insisted on preserving a remnant of their ancestors' faith.

As soon as the Soviet revolution tightened its grip throughout the vast expanses of the Tsarist Empire, upon whose ruins it arose, many believing Jews were forced to abandon the faith of their forefathers and declare their uncompromising loyalty to the values of the Revolution. Many did so willingly, confident in the limitless possibilities the Soviet Union offered them. Others did so reluctantly and from a lack of choice. A significant minority of Jews decided to secretly uphold the principles of the religion which they gradually found themselves forgetting.

Moving testament to preservation of the embers of Judaism by the “Anusim of the Revolution” can be found on the protective leaves (the first pages before the body of the text of the book) of a Soviet book printed in Homel (Gomel), a city located in south east Belarus. Next to the Ministry of Culture’s official approval for the book to be printed, the book’s Jewish owner wrote a prayer in memory of the souls of his family and relatives. 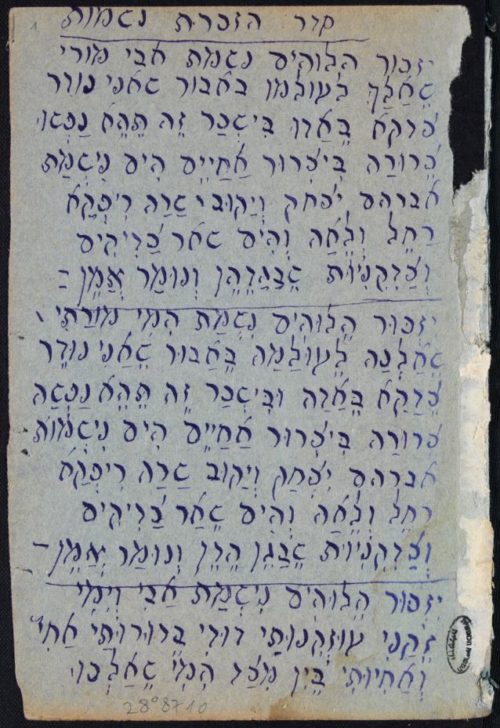 A study of the manuscript reveals that Hebrew was not a language this anonymous Jew was used to writing, and the prayer is replete with spelling mistakes. This fact strengthens our hypothesis that the prayers were written from memory and not copied from written text – which would have constituted a grave crime at the time.

Our attempts to date the manuscript were unsuccessful. We know that the book itself was printed in Gomel, a city which boasted a Jewish community from at least the 16th century. The Wehrmacht captured the city in August 1941. Most of the Jews of Gomel were evacuated before the invasion by the retreating Red Army. The 4,000 Jews who remained in the city were murdered by the Nazis.

Does this fact provide proof that the prayer was written before the Second World War? This could well be the case. However, we do know that a small number of Jews who survived the horrific war returned to Gomel at its end, and  one of them may be the author of the manuscript.

The article was written in collaboration with the Manuscript Department and the Institute of Microfilmed Manuscripts.