A History in Pictures: The Jews of the USSR

In the early 1980s, Ilya Dvorkin came up with the idea of documenting the lives of Jewish communities throughout the vast territories of the Soviet Union 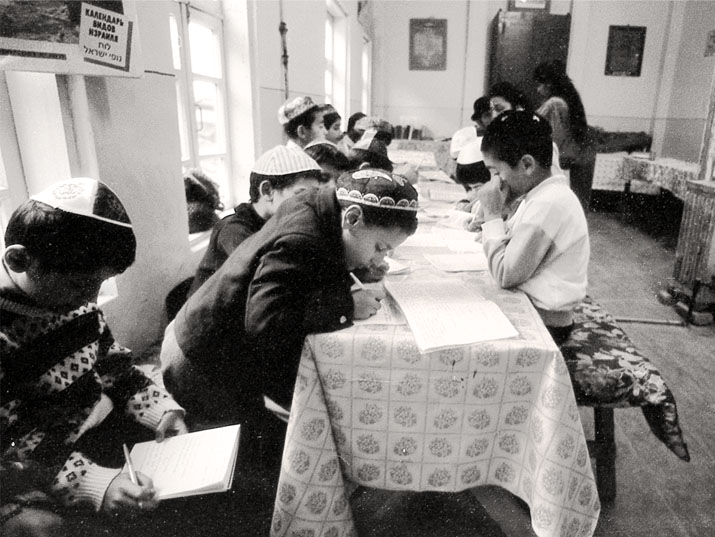 Jewish children at school in Bukhara

Ilya Dvorkin is a man of vision. His white hair and matching beard give him the appearance of precisely the kind of person who dreams big. Ilya Dvorkin’s dream is to document, distribute and memorialize the rich culture of the Jewish diaspora in the former Soviet Union. He has probably done more than anyone to realize this vision. Dvorkin is the founder and director of the St. Petersburg Institute of Jewish Studies (previously known as the St. Petersburg Jewish University), where he has been working on his huge project for nearly 40 years.

The history of Jewry in Russia and in the territories of the former Russian Empire stretches back many centuries. According to some theories, Jews have been living in the Caucasus region since the Second Temple period, possibly even earlier. It is only natural that such a lengthy, rich history should consist of a wide range of stories; stories of assimilation and separation, nationalism and cosmopolitism, religious persecution and religious tolerance, subjugation and autonomy, and so forth.

The Jewish communities of the former Soviet Union were never monolithic. For the better part of this history, most Jews did not live in Russia itself, as we know it today. In fact, the only thing connecting the different Jewish communities was the prosaic fact that they were all ruled by the Russian-speaking USSR for roughly 70 years. The communities differed in ethnic origin, language, dress and even in religious and cultural customs. Jews from the shtetls of Poland or Ukraine were different than the Jews of Bukhara, Moscow and the towns of the Caucasus. All were consumed by the USSR.

It was this vast cultural wealth that Ilya Dvorkin set out to conserve. In 1981, he took up what seemed like a crazy idea – photography expeditions to the Jewish communities of the USSR. Dvorkin himself funded the expeditions. He brought along a photographer and set out to find Jews in different towns under Soviet rule. The expeditions lasted until 1998, through the years of glasnost and the dissolution of the Soviet Union. In many cases, Ilya and his photographers were only able to find the last remnants of Jewish communities which had almost completely dispersed, only a few years earlier. Dvorkin’s photography project provides unique documentation of these disappeared communities.

We may not have time or space to conduct a complete review of the history of Russian Jewry, but we can offer a peek at it. The first Jews to settle in the areas that would eventually come under Soviet sovereignty apparently lived in the ancient Greek colonies along the Black Sea on the Crimean Peninsula. Archeological evidence suggests Jews began to settle there as early as the first centuries CE, possibly even earlier. Many centuries later, a large percentage of the Russian Empire’s Jews lived in Poland, Ukraine, Belarus and the Baltic states. Others came from the republics of central Asia.

Dvorkin’s documentation project reached all of these communities. Community buildings such as synagogues and batei midrash (“Houses of Learning”) that no longer exist were recorded as part of his project, as were ancient Jewish cemeteries. Customs, rituals and cultural traditions that were common among local Jews were also documented. In addition to the many photos taken, interviews with members of the different communities were recorded on video, as were local songs and unique prayers. Dvorkin and his team also documented Jewish daily life in what was then known as Leningrad (today’s St. Petersburg). Some of the community’s public figures were also captured in this documentation. One of these was the Prisoner of Zion, Ida Nudel, who later immigrated to Israel.

The massive project contains valuable documentation of life in the USSR during the 1980s and 1990s – a unique period in Soviet and Russian history. Dvorkin takes special pride in images of “the last European shtetl” – photos from the town of Sharhorod, which is today part of Ukraine. Sharhorod was one of the only towns in the region that was conquered by Romania and not by Nazi Germany, which is why most of its Jews survived. There, Dvorkin’s team recorded a klezmer musician playing one of the local Jewish community’s songs.

The true gem of the collection is undoubtedly the huge and unique assortment of photos, video recorded interviews, and other recordings and items that came from the Jewish communities of Bukhara. These Jews, who lived in the territory covered by modern-day Uzbekistan and Tajikistan, represented one of the oldest Jewish communities in history. The Nevzlin Collection is an exceptional treasure of unique Jewish history.

This project, which documents the various Jewish communities in Russia and the USSR, would not be accessible without the support of the Leonid Nevzlin Center for Russian and East European Jewry at the Hebrew University. Thanks to the Nevzlin Center, visitors of the National Library website can explore the documentation project which includes approximately 10,000 photos, and counting.