The Jews Who Treated the Hindenburg Survivors 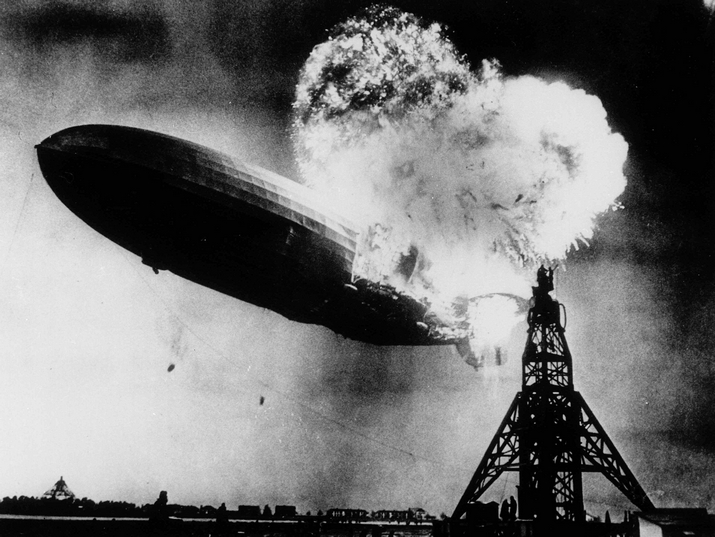 The pride of Nazi Germany, the Hindenburg — officially designated LZ-129 Hindenburg — was the biggest commercial airship ever built, and, at the time, the most technologically advanced. It was 803.8 feet (ca. 245 meters) in length and 135.1 feet (ca. 41 meters) in diameter. It was more than three times larger than a Boeing 747, and four times the size of the Goodyear Blimp. Four engines powered the Hindenburg and it could reach cruising speeds of 76 mph (ca. 122 km/h) with a maximum speed of 84 mph (135 km/h).

The Hindenburg featured 72 passenger beds in heated cabins, a silk-wallpapered dining room, lounge, writing room, bar, smoking room, and promenades with windows that could be opened in-flight. Special precautions were taken to ensure that the smoking room was safe, including a double-door airlock to keep hydrogen from entering.

The Hindenburg was named for former German Weimar Republic President Paul von Hindenburg (1847-1934). It took its first flight in March 1936, and flew 63 times, primarily from Germany to North and South America.

The Hindenburg was already under construction when the Nazis came into power in Germany in 1933. The Third Reich saw the Zeppelin as a symbol of German strength, as the Hindenburg was partly owned by the government and partly owned by the Zeppelin Company, its creators. Giant swastikas were painted on its tail fins. The German minister of propaganda, Joseph Goebbels, ordered the Hindenburg to embark on a propaganda mission early on, before the ship’s endurance tests had even been completed. For four days, it flew around Germany, blasting patriotic songs and dropping pro-Hitler leaflets.

After opening its 1937 season, by completing a single round-trip passage to Rio de Janeiro, Brazil in late March, the Hindenburg departed from Frankfurt, Germany on the evening of May 3. It was the first of 10 round trips between Europe and the United States that were scheduled for its second year of commercial service. American Airlines had contracted with the operators of the Hindenburg to shuttle the passengers from Lakehurst, New Jersey to Newark, New Jersey for connections to airplane flights.

Except for strong headwinds that slowed its progress, the Atlantic crossing of the Hindenburg was otherwise uneventful, until the airship attempted an early-evening landing at Lakehurst three days later on May 6. Although carrying only half of its full capacity of passengers for the accident flight, the return flight, which never happened, had been fully booked. Many of the passengers with tickets to Germany were planning to attend the coronation of King George VI and Queen Elizabeth in London the following week.

The airship was hours behind schedule when it passed over Boston on the morning of May 6, and its landing at Lakehurst was expected to be further delayed because of afternoon thunderstorms. Advised of the poor weather conditions at Lakehurst, Captain Max Pruss charted a course over Manhattan Island, causing a public spectacle as people rushed out into the street to catch sight of the airship.

After passing over the field at 4:00 p.m., Captain Pruss took passengers on a tour over the seaside of New Jersey while waiting for the weather to clear. After finally being notified at 6:22 p.m. that the storms had passed, Pruss directed the airship back to Lakehurst to make its landing almost half a day late.

At 7:25 p.m., the Hindenburg caught fire and exploded during its attempt to dock with its mooring mast at the Naval Air Station Lakehurst, filling the sky with smoke and fire. On board were 97 people (36 passengers and 61 crewmen). There were 36 fatalities (13 passengers and 22 crewmen), as well as one ground crewman, a civilian linesman.

The massive airship’s tail with its Nazi symbol fell to the ground, while its nose, hundreds of feet long, rose into the air like a breaching whale. It turned to ashes in less than a minute. Some passengers and crewmembers jumped dozens of feet to safety while others burned. Despite the sheer ferocity of the colossal fire, 62 of the crew members and passengers survived, but most of them were severely burned.

The majority of the victims were burnt to death, while others died jumping from the airship at an excessive height, or as a consequence of either smoke inhalation or falling debris. Immediate survivors were taken with broken bones and burns to the small, 40-bed, Paul Kimball Hospital in nearby Lakewood, New Jersey, eight miles (13 kilometers) away, which was overwhelmed by the number of patients.

Treating the Hindenburg patients, regardless of Nazi party affiliation or religion, was prominent Lakewood physician, Adolph Towbin, M.D. (1888-1966), a Jewish immigrant from Kaments-Podolski, Ukraine. Dr. Towbin arrived in the U.S. at the age of 15 in 1903, and had graduated from Fordham University Medical School in 1916. After an internship at Flushing Hospital in New York, he was drafted into the army and assigned to Lakewood, New Jersey in 1918 as WWI soldiers were being treated at the Laurel in the Pines Hotel, following poison gas injuries. He liked Lakewood so much, he decided to stay and open up his medical practice after the war.

The treatment at the time for burns, malaria, herpes, and smallpox, was picric acid, as it was an astringent and antiseptic. With the number of patients being treated, the hospital quickly ran out of picric acid, gauze, bandages, and other medical supplies. Dr. Towbin immediately called his best friend and relative by marriage, pharmacist Max Gitow, R.Ph. (1894-1973), the owner of Lakewood Pharmacy, to bring him all that he had in stock.

Gitow, (whose original name was Moishe Gitovich), was another Jewish immigrant, from Mogilev, Belarus, who had arrived in the U.S. in 1904. He had graduated from the New York College of Pharmacy in 1913 at the age of 18, and his father, who was also a pharmacist in Belarus and later in Ukraine, had purchased Lakewood Pharmacy in April 1914. He personally brought over the needed supplies to the hospital 1.5 miles (2.4 kilometers) away and stayed to see if he could be of assistance. It was these two Jewish professional men whose quick actions helped save the lives of numerous German (several of whom were Nazis) and non-German Hindenburg passengers.

At the time, the Hindenburg was supposed to be ushering in a new age of airship travel, but the crash instead brought the age to an abrupt end, making way for the era of passenger airplanes. The crash was the first massive technological disaster caught on film, and the scene became embedded in the public’s consciousness.

The actual site of the Hindenburg crash is marked with a chain-outlined pad and bronze plaque where the airship’s gondola landed. It was dedicated on May 6, 1987, the 50th anniversary of the disaster. Hangar No. 1, which still stands, is where the airship was to be housed after landing. It was designated a Registered National Historic Landmark in 1968.

Special thanks to David Richmand, M.D., of Plainfield, New Jersey, the maternal grandson of Dr. Adolph Towbin, who provided input for this article. Max Gitow, R.Ph., was the maternal grandfather of the author.

This article was originally published in the December 2019 edition of the Tulsa Jewish Review. It appears here as part of Gesher L’Europa, the National Library of Israel’s initiative to share stories and connect with people, institutions and communities in Europe and beyond.