What if you found a vaccine for a deadly disease and no one believed you? What if your only option was to inject yourself with a weakened strain and hope for the best? 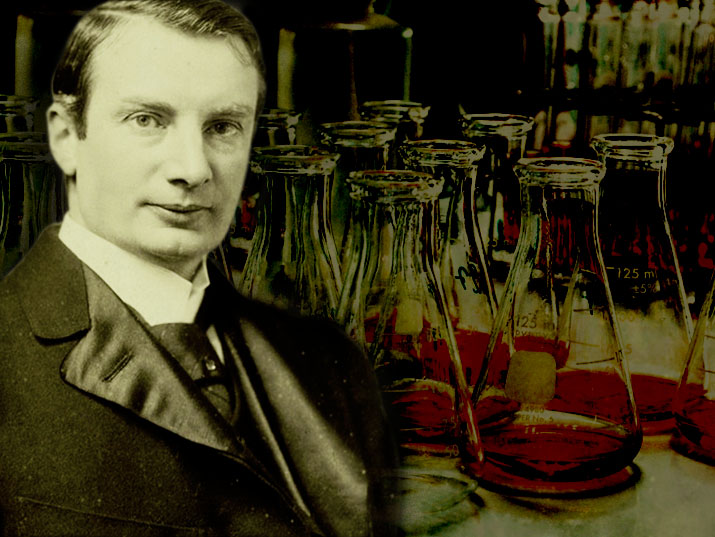 Scandal, anti-Semitism, and experiments on human beings – when we opened this fascinating archive to have a look at the documents contained within, we could not have imagined how this incredible tale would unfold – the story of a Zionist scientist who was determined to save the world from the plague and cholera against all odds. Introducing Waldemar Mordechai Wolff (Zeev) Haffkine.

Haffkine was born in the Russian Empire in 1860 in what is today the Ukraine. His life trajectory was determined as soon as he completed his studies in Switzerland in the late 19th century, when he decided to dedicate his life to the study of tiny organisms. At the time, Louis Pasteur was one of the best-known scientists in the field, and Haffkine decided to seek work at the Pasteur Institute in Paris. He was accepted but was given a job as a librarian, as that was the only available opening at the Institute. Bureaucracy, what can you do?

While Haffkine was working with experts like Pasteur and Ilya Mechnikov, cholera outbreaks in Russia and India emerged as a serious threat. Haffkine felt his time had come, and after tireless research, he managed to develop a cholera vaccine based on attenuated bacteria. People may have been dying in masses of a rampant pandemic, but no one stepped up to support Haffkine’s research. He decided to take a drastic step – a last resort to prove the vaccine’s credibility: Haffkine picked up a syringe full of an attenuated strain of cholera, inserted the needle into his arm, and injected the disease straight into his bloodstream. How many would have done the same?

After several days of suffering from fever and worrisome symptoms – the long-awaited turnaround arrived, and on July 30th, 1892, Haffkine reported his findings and the success of the vaccine to the Biological Society in France. But France and other European countries remained skeptical and suspicious of his methods, and refused to accept his results. At the time, European official medical establishments weren’t very enthusiastic about the idea of vaccines in general.

Haffkine refused to believe that a drug, which could cure millions, would not see the light of day. He decided to try his luck in England, where a successful demonstration of his ideas finally gained him access to the outbreak’s epicenter – India. Soon enough, Haffkine was working on the subcontinent. The widespread outbreak of cholera in India led the desperate Bengali government to officially authorize Haffkine to vaccinate the residents of its territory.

An outbreak of another disease, the bubonic plague in Mumbai, impelled the Indian authorities to turn to Haffkine to help them find a vaccine. In January 1897, after three months of intensive work, Haffkine once again inoculated himself with an experimental vaccine for the plague – because hey, it worked once, what could go wrong, right? Well, it worked again! Haffkine very quickly started to experiment on other people, apart from himself. He worked with a number of volunteer prisoners, who agreed to take part in the experiment, dividing them into two groups. Haffkine compared the results between the two groups in order to ensure the vaccine was truly effective. During this period, he set up a laboratory in the neighborhood of Byculla. “The Haffkine Institute” would later be named after him.

The success of the vaccine among the Indian population was phenomenal. By 1900, Haffkine had saved four million people thanks to his treatments. Even the Russians contacted him through secret channels and requested vaccines for cholera. Nevertheless, just as some people enjoy seeing a rising star, there are always those who love seeing that same star crash and burn, and Haffkine barreled toward the incident that would tarnish his name and cost lives.

In 1902, Haffkine arrived at the village of Mulkowal in order to inoculate the villagers. Several days after the treatment was given, 19 villagers died from tetanus. Accusatory fingers immediately pointed at Haffkine, with complaints emerging that something had gone wrong with one of the vaccine bottles.

Rumor spread like wildfire that the vaccine was infected with tetanus. A commission of inquiry was appointed which found Haffkine guilty. Soon after, he was deported back to England in shame. The episode came to be known as the “Little Dreyfus Affair,” and was accompanied by an air of anti-Semitism, which Haffkine was familiar with from his life in Russia.

However, he was not going to give up easily. A number of famous friends and scientists published a letter in The Times supporting Haffkine. They argued that their fellow scientist was entitled to the benefit of doubt, and that it was impossible to establish that he was personally responsible for the deaths. This half-hearted acquittal helped Haffkine return to India and continue his work against cholera and the plague. He proved himself such an effective scientist that, after returning to Calcutta in 1907, the Indian authorities issued a report that wholly acquitted him in relation to the “Little Dreyfus Affair,” stating that his innocence did not rest only on reasonable doubt and that he deserved to be fully exonerated.

But saving the world wasn’t enough for Haffkine. After retiring in 1914 and returning to France a year later, he continued to invest his time in scientific work and in matters of Judaism and Zionism. Haffkine supported Zionist organizations and provided aid to Jewish war victims during and after WWI. Following the war he founded the Haffkine Foundation which fostered Jewish education in Eastern Europe. Towards the end of the 19th century, he even met with Sultan Abdul Hamid II, in an attempt to persuade him to sell lands in Ottoman Palestine to Jews. The Sultan wasn’t too enthusiastic about the idea.

Haffkine’s enthralling story and even his archive, continues to fascinate us to this day. Perhaps it’s too bad that Haffkine isn’t here with us today during the current challenging period, with a new pandemic spreading across the globe. Who knows, maybe he would’ve saved the world for the third time? He certainly would have jumped at the opportunity.

Thanks to Rachel Misrati from the National Library’s Archives Department for her help with this article.

The Waldemar Mordecai Wolff Haffkine Archive has been reviewed and described thanks to the generous support of The Leir Foundation.

No Friend of Bacteria: A Letter from Louis Pasteur