The pandemic known as the Spanish flu spread across the world in the early 20th century, reaching the Land of Israel as well; we took a look back at the news reports of the day 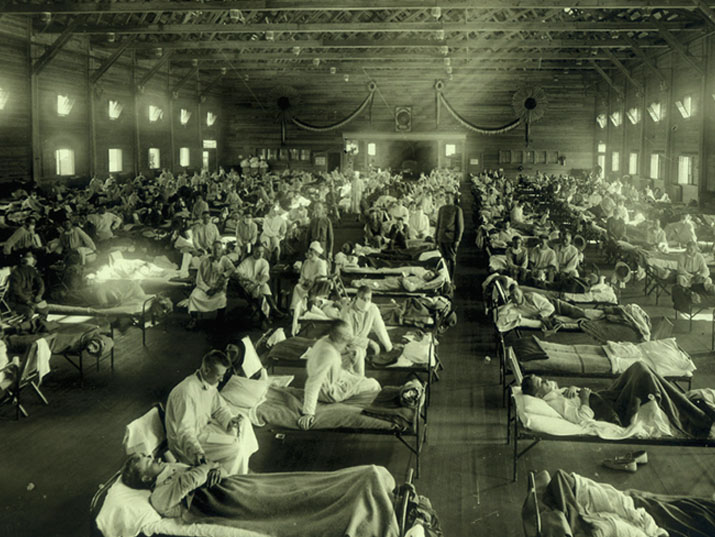 Courtesy of the Otis Historical Archives, National Museum of Health and Medicine, Maryland

“Avoid crowded gatherings in closed places; avoid contact with others as much as possible, don’t even shake one’s hand when saying hello.” This was the ninth directive in a list of guidelines published by the Hebrew newspaper “Do’ar Hayom“ in February 1920, when the pandemic known today as the Spanish flu raged all over the world – and in the Land of Israel as well.

The Spanish flu, otherwise known as the 1918 flu pandemic, spread rapidly across the globe following the end of World War I, with overcrowding and famine likely contributing to the disease’s outbreak. The flu infected approximately half a billion people, almost a third of the world’s population, and killed tens of millions. It was one of the deadliest pandemics in human history.

In the Land of Israel, where the population was relatively sparse at the time and largely rural, the disease didn’t hit as severely as it did in other countries across the globe. Nevertheless, it arrived here too, and the population and authorities had to adjust to a new situation. As we mentioned above, even in 1920 – well after the major outbreaks of the pandemic across the world – residents were still being asked to adhere to strict hygiene rules. Apart from being given basic cleaning guidelines, people were also instructed to isolate patients and even to inform the authorities if they encountered someone who was sick.

Recently, a disease has been raging in Haifa, which is apparently that same Spanish Flu which wreaked havoc in Europe, claiming so many victims, even more than the Great War. And yet, here it won’t last long. Nevertheless, it has become quite dangerous here as well, especially in the Old City neighborhoods, where the Muslims and Sephardic Jews live, and which is quite gloomy and dark. Furthermore, these residents do not maintain hygiene and sanitary conditions.

There is little information on the impact of the disease on the Land of Israel. Contemporary reports cite a low number of casualties in urban areas compared to Europe. According to a study on the subject conducted by Zalman Greenberg, there were approximately 40 listings of flu patients at Sharai Tzedek Hospital in Jerusalem in 1918 – and this is the only remaining documentation regarding patients infected with the disease in the country. Greenberg also noted that in Tel Aviv’s Trumpeldor Cemetery, there are three tombstones with inscriptions stating that the deceased passed away from the “Spanish disease”. Here is an excerpt from a doctor’s report on the state of health in the country in 1919:

On the State of Health in the Country

This first year following our redemption from the agonies of war, has passed, compared to other countries, with relative peace. Although malevolent angels in the shape of contagious diseases and various plagues, which always follow war, and which accompanied the World War as well, have also passed through our country. Evil spirits blowing through the ravaged countries, trampled by armies, have blown through the air of the Land of Israel as well. “A scroll and a sword descended intertwined from heaven” – yet this is but a saying of old. It is a historical fact that in places where you find the sword, you come across epidemics and other exotic diseases. However, just like with the war itself, our brothers in the Land of Israel suffered less of diseases than the rest of the world. Lone cases of cholera, typhus, and recurring fever, and many case of the Spanish disease – a disease that has spread like a storm through all the fighting countries and their neighbors, and wreaked havoc upon them. – This disease claimed victims among our young soldiers, who survived the Turkish oppression. Nevertheless, casualties in our small country were fewer than those abroad.”

Naturally, in the early months following the outbreak of the flu pandemic, in the spring of 1918, when the information was still scant and incomplete, the Hebrew newspapers began publishing their reports. In June 1918, a journalist for the newspaper “Ha’Tzfira” (one of the leading early Hebrew newspapers, published in Warsaw), reported on the spread of the disease in Spain.

I read that all public and government spaces in the capital have closed. The trams have stopped working. The factories and industries have shut down. The schools have closed and the students, who were anxiously studying for their exams, were sent home. More than one hundred thousand people are lying sick in their beds, and the disease hasn’t overlooked the king and his chief ministers, who have also caught this strange, wondrous illness, which has suddenly assailed Spain.

And I also read that the disease is spreading and expanding all over the country. The number of people afflicted by the disease has reached 10 million people. The military forces stationed in Morocco and the Canary Islands are also suffering. The doctors are helpless; all of the people are extremely fearful.”

The pandemic raged for two years. During that time, Hebrew newspapers wrote brief reports about the pandemic spreading throughout the rest of the world, just as they reported on other daily news from around the globe with the help of news agencies.

“Madrid (today): the Spanish flu has erupted again. One hundred and twenty people died from the disease in the past two days.”

The issue of language in these reports is no less interesting. What was the disease called when it mysteriously appeared? The source of the virus wasn’t actually in Spain. Its common name, “the Spanish flu”, stemmed from the fact that most of the initial reports of the disease came from neutral Spain, a country that didn’t take part in World War I and which didn’t censor its press. However, Hebrew newspapers hurried to align with other media outlets around the world and associated the disease with the Iberian country. Some newspapers wrote of “the Spanish disease”. The Yiddish press often used the phrase “shpanishe magefa” (Spanish plague). These papers were published in the United States and across Europe and reported more frequently on the topic as their target audience resided in countries that were more heavily affected. Eventually, “Spanish flu” became the dominant name for the disease. The Hebrew newspapers still used the terms “grippe” (derived from French) and “influenza“, but gradually they also began using the word “shap’a’at“, meaning “flu”, which Eliezer Ben Yehuda coined as early as 1893.

In late 1920, the Spanish flu disappeared from the world just as suddenly as it had appeared, and with the exception of a few outbreaks in Africa, the H1N1 virus which caused a worldwide pandemic, didn’t return until the swine flu outbreak of 2009. However, here in the Land of Israel, the relatively new British Mandate authorities had to deal shortly after with the return of an equally threatening illness: the plague, which broke out in Jaffa and threatened Tel Aviv in 1922. Fortunately, thanks to the authorities’ determined actions, it was also wiped out of existence. You can read about it on the Israel State Archive’s website.

And one more bonus tidbit:

Although the Spanish flu was left behind, various flu viruses remained with us, and even made their way into commercial advertisements! In 1957, there was an outbreak of another (much less fatal) flu pandemic around the world, known as “the Asian Flu.” “Eliaz” wineries from the Israeli town of Binyamina took advantage of the opportunity and published an ad with a recommendation that wasn’t necessarily approved by doctors: 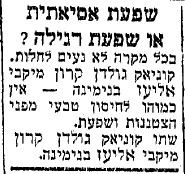 Either way, getting sick isn’t pleasant.

Golden Crown Cognac, from Binyamina’s “Eliaz Wineries” – is the best natural vaccine against flues and colds.