On the morning of October 5th, 1939, 43 members of a Haganah officer’s training course found themselves in handcuffs and being led by the British army to Acre prison; This is the album that tells their story 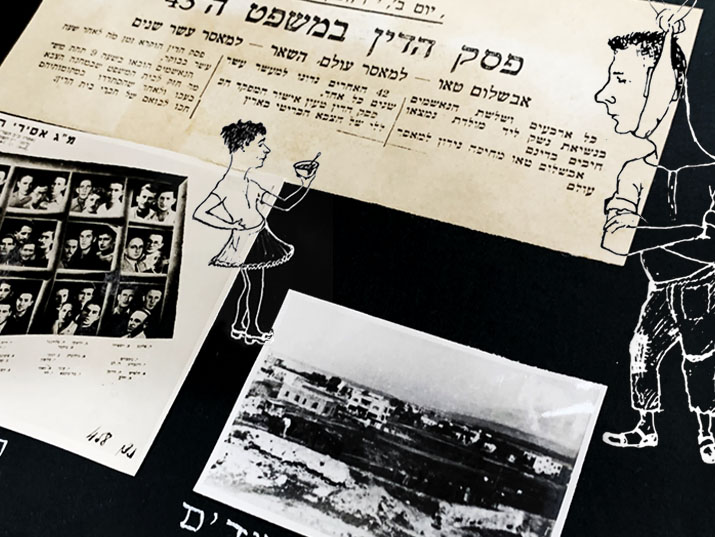 Putting aside the introduction and the assortment of press clippings, one might think that the album of the “Haganah 43” (the Haganah was the largest Jewish paramilitary organization in Mandatory Palestine between 1920 and 1948) was just another soldier’s yearbook filled with stories of their heroic deeds, funny caricatures, and photographs of smiling young men – the kind of military service that might be the envy of many.

“In the early dawn hours of October 5th, 1939, catastrophe struck during a secret military exercise in the Lower Galilee: Without warning, we were surrounded, stripped of our weapons and escorted to Acre prison where the gates shut with a bang behind us. It was a very different, not to mention much longer and much more tormenting ending than originally planned to officer’s training course No. 2…”

The detention coincided with the end of the collaboration between the British military and the Haganah during the Arab uprisings of 1936–1939, after which the British forces once again considered the Haganah one of a number of underground movements in the country that needed to be suppressed. The 43 detainees were taking part in a commander’s course at Yavniel, which was disguised as an innocent “Hapoel” physical training course. Many considered the severity of the sentence as the embodiment of the Mandatory regime’s malicious caprice—42 of the detainees were sentenced to 10 years in prison, and Avshalom Tao, who had pointed his weapon at the British, was sentenced to life.

They were taken first to Acre Prison and from there to Mizra Detention Camp. The detainees, who often referred to themselves as prisoners, testified that the sentencing was carried out “by a swift military tribunal which had the air of a rubber-stamp procedure”. Even worse than the conditions of their detention was the timing of the  Mandatory government’s decision to “impose years-long sentences on the 43 young Jewish defense officers,” one month into World War II, “when the Jewish community was summoned to mobilize  all its forces against Nazism, which was rising up to enslave the world and destroy our people.”

It was all true; everything was serious and urgent. And yet, it’s hard not to take note of the atmosphere of brotherhood, and dare we say, frivolity and humor that characterizes the album – once you get past the somber introduction. Let’s take a look.

The Haganah album in the Library’s collection was given as a memento to Major General Yohanan Ratner, a leader of the Haganah and an architect in civilian life. It opens with a  “memorial” page of sorts showing three detainees (from right to left) – Yaakov Gordon, Mordechai Plutchnik and Shlomo Ben Yehuda – who had fallen during their service in the Haganah, following their release from Acre Prison.

On the next page, we find the course commanders (who were imprisoned with their cadets) – their names are not noted on the page. With the help of Omri Shabtai, we were able to identify the prisoner on the far right who appears above the caption “Supervisor” (the English word transliterated into Hebrew letters – סופרויזר). This was the prisoners’ representative in dealing with the prison’s staff. He would go on the serve as the IDF’s fourth Chief of Staff, as well as Israel’s Minister of Agriculture and Minister of Defense – the “Supervisor” was none other than Moshe Dayan, then just 24 years old.

Above and to the left of Dayan, dribbling a soccer ball, is Moshe Zelitsky (Carmel), who would go on to command the IDF’s Carmeli Brigade during Israel’s War of Independence, capturing Acre and the prison which had held him, among other exploits. To the left of Carmel is Raphael Lev, who commanded the officer’s course which had been interrupted by the arrest of the 43. Lev was a former battalion commander in the Austrian army and had also been active in the Republikanischer Schutzbund paramilitary organization.

On the bottom-left is “The Mukhtar” – Yaakov Salomon – who was the Haganah prisoners’ representative to the Arab prisoners being held at the facility.

The picture below appears to show three of the prisoners “In Full Costume”, as the Hebrew caption suggests, wearing ponchos and mischievous smirks while brandishing buckets and a broom. The exact significance of the episode remains unclear, however.

One page of the album is dedicated to the Jerusalemite prisoners, while others are devoted to those hailing from the cities of Tel Aviv and Haifa. Below is the kibbutznik page, which includes portraits of prisoners answering to such nicknames as: “Ulcer” (top right); “The Ballerina and the Hummus” (bottom-center); “Bunny” (bottom-left); and the “Preacher” of the group (top left).

Without an expert to help guide us through the album, many of the cryptic quotes and phrases remain unsolved puzzles: for example, on the next-to-last page, who are “The Captain and the Snakes”?

At the end of the album is a press clipping reporting the joyous news: “The 43 are Being Released Today,” after almost a year and a half of pressure from Jewish leaders on the Mandatory authorities.

The 43 were freed on February 17th, 1941. According to the article: “From yesterday morning, small cars and busses filled with the prisoners’ families, friends and acquaintances flowed into the central bay near Acre. The kibbutz was designated as the greeting point, where they dined at noon.”

Four months after their release, former detainee Moshe Dayan would find himself with an elite Palmach force in Syria, alongside British forces, in an operation in which he would lose his left eye.

Do you know the context of the drawings in the album? Can you provide us with more information? Feel free to write in the comments below or contact: [email protected]