How an Israeli soldier risked his life to retrieve the bodies of fallen comrades from behind enemy lines, and the incredible photos that captured an unlikely encounter 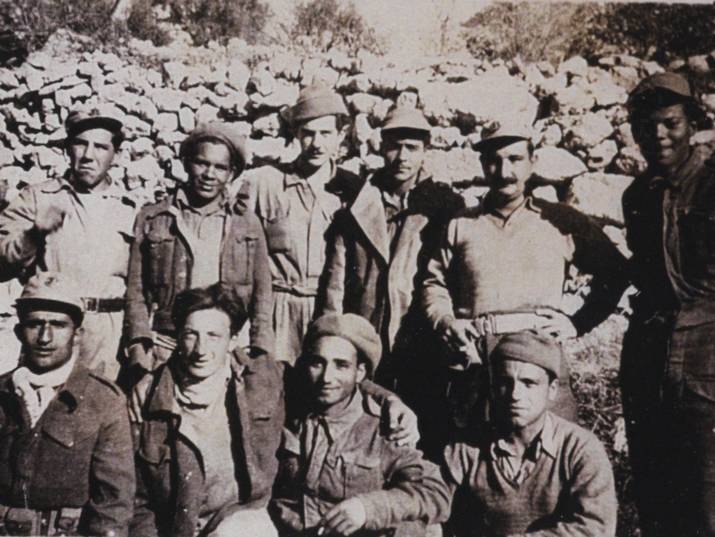 Yaakov Yaniv in the center of the picture taken during the encounter between the Israeli and Egyptian soldiers, the Pritzker Family National Photography Collection at the National Library of Israel

The story of Operation Yekev (“Winery” in Hebrew) begins in October 1948, during Israel’s War of Independence; when an entire brigade comprising three battalions – the Beit Horon Battalion, the Moriah Battalion, and the 64th Battalion – was sent on a mission to conquer the town of Beit Jala, which lies south of Jerusalem and north-west of Bethlehem. The commander of the operation was Moshe Dayan.

The Beit Horon Battalion managed to get past the railway tracks, which served as the separation line between Israeli and Egyptian positions (near what is known today as Ein Yael and Jerusalem’s Biblical Zoo). The 64th Battalion launched an attack on the village of al-Walaja. Our story’s hero, Yaakov Yaniv (Novak), was a squad sergeant in this battalion. He was 20 years old at the time and had arrived from Tel Aviv to Jerusalem to serve in the Haganah only a few months earlier. The 64th Battalion did not engage in battle in this case, but the force was exposed to friendly fire by a mortar unit. Fortunately, none of the battalion’s soldiers were hurt. The Moriah Battalion launched its own attack during the night but was unsuccessful in crossing the railway tracks and advancing towards the hill occupied by the Egyptians. A single Bren machine gun persistently shot at Moriah’s vanguard unit, preventing its advance. Operation Yekev was a harrowing military failure.

Late at night, the brigade’s three battalions were given the order to retreat. Six soldiers from the Beit Horon Battalion were killed in action. The battalion’s soldiers managed to retrieve four of the bodies, but two remained in the field.

A month and a half later, on December 3rd, 1948, Yaakov Yaniv and his men were manning a position on Malcha Hill overlooking the railway line below, and observing the nearby Egyptian force. Today, the homes of Jerusalem’s Malcha neighborhood fill the entire area that was then a bare hilltop adjacent to an Arab village.

A few Egyptian soldiers suddenly stepped out of their post and shouted to Yaniv and his men: “We have two bodies. If you want, come and take them.” Yaakov Yaniv heard this and was stunned. He and a few of his men headed down the hill and reached the British Mandate railway which ran from Tel Aviv to Jerusalem, where the Egyptians waited for them. They agreed that Yaniv and a few of his men would go to the Egyptian post to retrieve the bodies while two Egyptian soldiers would remain at the bottom of the hill, in the custody of the other Israelis who would watch them until Yaniv and his men returned safely.

Yaakov Yaniv crossed the railroad and made his way to the Egyptian outpost on the mountain in front of him, carrying only his Kodak camera. A grove of trees covered the route up the mountain. Yaniv walked through the trees as one of the Egyptian soldiers followed him closely; he was a tall, thin soldier of Sudanese origin, armed with a Tommy gun. Yaniv would later learn that this was the machine gunner who had thwarted the Moriah Battalion’s attack. They proceeded to the Egyptian position known as “The White Trench”, an old Turkish fortification from the First World War, built as a defense against British attacks.

Who were the Egyptians who barricaded themselves there in 1948? These were units affiliated with the Muslim Brotherhood organization. How did they get there? The Egyptian army had invaded Israel earlier in the year, heading for Tel Aviv, but they were stopped at Ashdod on the southern coast. From there some units headed east towards the Judean Mountains, eventually making their way to Jerusalem; the Muslim Brotherhood unit was among these.

When he arrived at the trench, Yaakov Yaniv met the commander of the Egyptian force and was surprised to learn that he was in fact a local Palestinian Arab from the nearby village of Beit Safafa. They spoke in English and eventually, the Palestinian commander told him, “You can take the bodies,” gesturing toward the human forms sprawled on the ground a few dozen feet from where they stood. The sight of the completely exposed corpses was disturbing, but after taking a closer look Yaniv realized they had not been abused but were in dire condition as a result of the time that had passed since the soldiers were killed.

Yaniv sent for blankets and stretchers to carry the fallen soldiers’ bodies over to the Israeli side. Meanwhile, the Palestinian commander offered him a cup of tea, and they sat down to drink together. The commander told Yaniv he had led the force that attacked the Mekor Chaim neighborhood from Beit Safafa a few months earlier. Surprised, Yaniv told him that his commander, Danieli, a Palmach member who was born in Mekor Chaim, led the force that protected the neighborhood against the attacks.

Sitting in the Egyptian post, Yaniv was not afraid. He was treated decently, he said. After all, they had offered him tea, and  they were happy to drink along with him. Some might call it a miracle or perhaps just a moment of absurdity in the midst of the terrible battles of the War of Independence.

As they sat and drank, soldiers gathered around them, and when the stretcher and blankets arrived, the Palestinian commander stood up and said, “I’ll help you carry the stretcher.” He walked over and grabbed one end of the stretcher with both hands. Yaniv held it from the other end and together they walked down the hill towards the railroad. The second stretcher was carried down by other soldiers.

When they arrived at the waiting point with the bodies of the fallen soldiers, men from Yaniv’s unit had already arrived to receive the bodies. This was when Yaniv took out his Kodak camera, bought with his first salary when working at the Central Post Office on Allenby Street in Tel Aviv before the war. The moment was captured for posterity as soldiers from both armies posed for the photograph, enemies at war who were briefly partners in an operation to bring the bodies of IDF soldiers to burial in Israel – an operation in which all participants put their lives at risk.

After his return, Danieli, Yaakov Yaniv’s commander, confiscated the camera film and threatened Yaniv with a court martial. Danieli considered the operation initiated by his subordinate a grave violation of military procedure– though it had ended peacefully, Yaniv’s life and possibly the lives of his comrades had been endangered. Yaniv took on the operation alone, without asking anyone’s permission. Certainly, had he asked for it, he would never have been permitted to carry out such an operation in an Egyptian outpost in the middle of a war. To Yaniv’s surprise, the film was returned to him a few days later, and the court martial never materialized.

Years later, Yaniv asked Commander Danieli why he had not been put on trial at the time, and Danieli replied that the day after the incident, Moshe Dayan, the regional commander, arrived in the sector. Danieli told Dayan what happened, and the latter replied with a typical dismissive gesture and instructed Danieli to let the matter go. It seemed that to Dayan, Yaakov Yaniv’s heroic act outweighed the offense. When the film was returned to him, Yaniv hid it and had the pictures developed as soon as he could. He kept them with him ever since. One day, he received a phone call from military historian Dr. Nir Mann, who heard of Yaniv while conducting historical research on Operation Yekev. When they met, Mann saw the photos and suggested that Yaniv donate them to the National Library of Israel due to their great historical value.

Many years had passed, but Yaakov Yaniv could not stop thinking about the soldiers whose bodies he brought to burial in Israel. He wished to know who they were. He began to investigate and search for answers but encountered many difficulties as he was not from the same battalion as the fallen and had very little information about them. He contacted the Department of Families and Commemoration at the Ministry of Defense and told them his story. The information he received included the names of the soldiers and some documents but it was only partially accurate. According to the ministry’s records, only one body was retrieved that day.

Finally, Yaniv decided to go to the cemetery himself and look for the graves. At the Military Cemetery on Mount Herzl, where the fallen soldiers’ graves are arranged by war and date, he searched for the graves with the names he received. He discovered that one of them was located at the top of the mountain and the other closer to the bottom. Both graves had the same date on them. Yaniv could not understand why two people who were killed in the same place, who served in the same unit and whose bodies were recovered together, by him, were buried in different places. He told the Ministry of Defense about this and asked that they be buried side by side; the Ministry officials promised this would be done.

Finally, Yaniv was able to discover the identities of the two fallen soldiers whose proper burial he had risked his life for: They were both Holocaust survivors who arrived in Israel shortly before being sent to the frontline. Neither had any known relatives anywhere in the world. They were the last survivors of their families.

Since then, every year, on the eve of every Israeli Memorial Day, Yaniv goes to the Military Cemetery on Mount Herzl and places flower wreaths on the two graves.

If you liked this story, try these:
A Life Story in One Picture: The Photographer Who Fell in the War of Independence
Giving a Face to the Fallen: Uncovering the Life of the Late Menachem Baumgarten
The Mother Who Stayed Behind to Defend Her Home During Israel’s War of Independence