The Hebrew Women of His Majesty’s Armed Forces

During WWII, Hebrew women lined up to volunteer for the British Army. Posters from the period offer a fascinating glimpse of this unique chapter in Zionist history, as well as the history of feminism in Israel 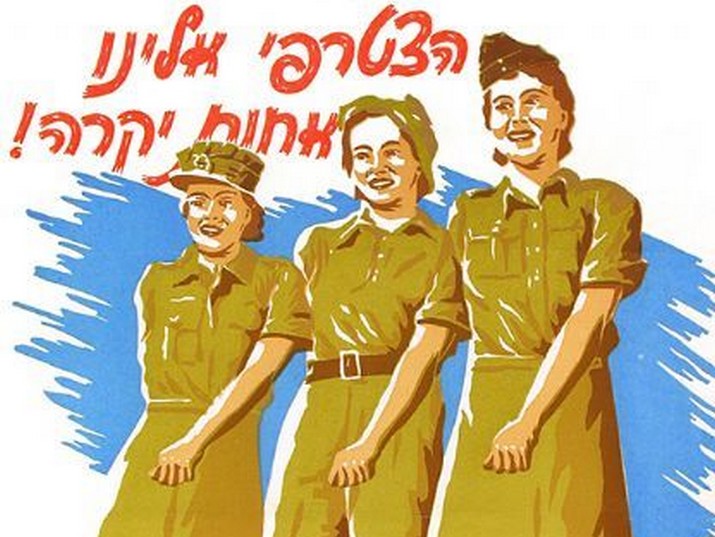 "Join us, dear sister!" – A poster encouraging women to enlist in the British Army, the Shamir Brothers Collection at the National Library of Israel

Mess Halls: If you like order and cleanliness and are prepared for any job – choose this service and set the spirit of the soldiers, in both training and active duty.

The above quote is taken from a 1940s military volunteer form for Hebrew women. The style certainly appears outdated or even offensive by today’s standards, but this was how Jewish women in Mandatory Palestine were called upon to join the British Army. It wasn’t all about “order and cleanliness”, of course – thousands of women enlisted and served in a variety of combat support roles. Some were stationed in Israel while others were deployed to different bases in the Middle East and even Europe, where they served in the fields of medicine, munitions, transport and more.

Undoubtedly, the idea of Jewish women serving in the British army was considered unusual. The British themselves certainly weren’t thrilled about it and among the Yishuv (the Jewish community in the Land of Israel), many were also opposed.

Pictures and posters from this period (many of which can be found in the National Library collections) offer an interesting view of a highly important chapter in our history, and, some may argue, of the history of feminism in Israel as well.

In mid-1941, representatives of women’s organizations such as WIZO, the Council of Working Women (known today as NA’AMAT) and Hadassah, requested that the British Army open its women’s branch, the ATS (Auxiliary Territorial Service), to Jewish volunteers from Mandatory Palestine.

The Yishuv considered itself part of the Allied struggle against the Nazis; from the beginning of the war, women were called to enlist alongside men and serve in the army, despite certain objections from religious parties.

The Jewish Agency joined the request put forth to the British and in October of 1941 permission to draft 5,000 women – 2,000 of them immediately – was granted.

In December of that year an official announcement was published. Numerous ads were posted in newspapers and on notice boards encouraging women to drop everything and volunteer. The Jewish Agency itself operated many of the enlistment centers and was at the forefront of this initiative. The following excerpt was published in Hebrew in the Davar daily:

Since the beginning of the war, the Hebrew woman has demanded her right to join the battle against the enemy. This demand has been accepted. Women must now fulfill their duty. Since the beginning of our resurrection in this land, women have stood side by side with men in building our country’s foundation. In every effort. Sacrifice and success were the lot of women just as they were the lot of men. Now women are allowed to contribute, in uniform, to the Yishuv’s war effort. The honor and privilege of volunteering in the army is now hers as well.

In January 1942 the first class of 60 women designated to become officers and NCOs was recruited and trained at the Sarafand army base.

A Hebrew anthem was written for the female recruits. In June of 1942 the national institutions announced that military service would be mandatory for all women between the ages of 20-30 who did not have children. Due to religious objections however, not all of the eligible women were actually enlisted in the ATS.

Throughout the course of the war, a total of 3,500 Hebrew women were recruited to the ATS, in addition to 700 women who served in the WAAF, the Women’s Auxiliary Air Force. Female soldiers served as drivers and nurses and filled various administrative and munitions roles.

During the Second Battle of El Alamein, Jewish drivers from the ATS brought badly needed troops and weapons to the front, an effort which helped block the Nazi advance toward Mandatory Palestine.

The Yishuv benefited a great deal from all of this. Many of the female volunteers later joined the various Jewish underground organizations. Their service had enabled them to acquire professional knowledge and expertise in an array of military fields, a fact which contributed immensely to these groups’ struggles against the British themselves as well as to Israeli efforts during the War of Independence.

Historically speaking, this episode provided a significant boost to the status of women in the Yishuv, as they proved they could contribute no less than their male peers.

In the underground movements, many women took on active roles in actual combat, and were not limited to support duties, though this policy was changed with the formation of the Israel Defense Forces in 1948. With the IDF taking shape during the War of Independence, many ATS alumni joined the ranks of the new Israeli army in command roles. IDF policy has since gone through many evolutions and today, thousands of Israeli female soldiers serve in active duty combat roles.