Home > Germany the Jews and Israel > Scenes from the Battlefield: A Jewish Artist’s Memories of WWI
Diaspora

Hermann Struck volunteered to serve his German homeland during WWI. He returned from the front with 400 sketches and prints which offered a glimpse of the atrocities of war, of its hostages, and of the lives of Eastern Europe's Jews 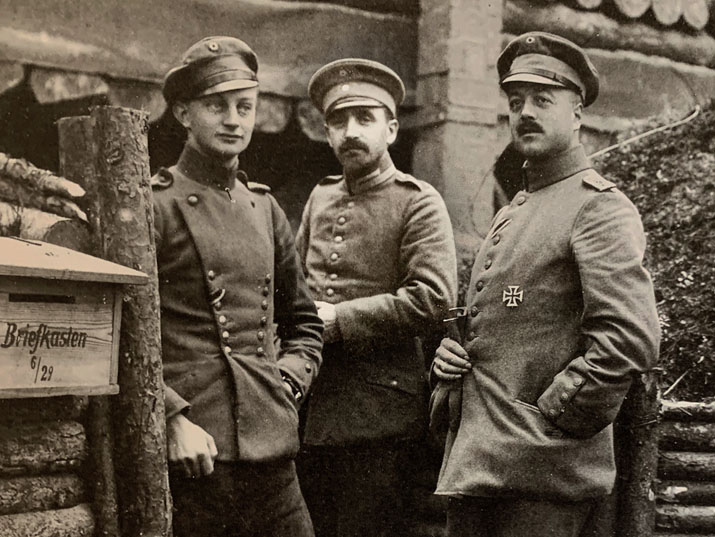 A boot peeking out of the corner of an army cot. A soldier cutting a loaf of bread with his pocketknife. Another soldier in a gas mask. The bombed-out remains of a home. These are just some of the powerful images that Hermann Struck, the famous Jewish artist, drew during his years on the Eastern Front of World War I. How did Struck, who was already famous in Germany’s artistic circles, as well as among Europe’s Zionist movements, find himself in such a situation?

In 1915, Hermann Struck, also known by his Hebrew pseudonym, Chaim Aaron ben David, was an active, well-known artist. He was born in Berlin to a religious orthodox family, and remained observant of Jewish law throughout his entire life. However, like many youths from German bourgeois families, he also studied in the gymnasium, where he developed an interest in art. Struck’s talent was clear from a young age, and after high school, he went on to study at the Berlin Academy of Fine Arts, where he met the famous Dutch artist, Josef Israëls, who taught him lithography. Struck gradually became a part of Europe’s artistic scene.

At the same time, he became more and more drawn to Zionist ideology. Struck participated in the 5th Zionist Congress, where his art was displayed before the audience.  He became a senior member of the “Mizrachi” religious-Zionist movement founded by Rabbi Yitzchak Yaakov Reines, and was even named chairman of the movement in Germany. In 1903, he visited the Land of Israel and returned with a series of etchings depicting the landscapes and sites of the country, which were published in a book one year later. Several months after that, he published one of his best-known works, a portrait of Theodor Herzl, after he met personally with the Zionist leader in Egypt.

So what brings a well-known artist, who has already published a fair number of books and collections of his work, to occupied Vilnius during World War I? Struck’s presence wasn’t exactly necessary there. When the war broke out, he was 38 years old, and as such, he wasn’t even required to enlist. Nevertheless, like many other Jews, he eagerly volunteered to serve his country. At first, he was refused, because of his age, but in 1915, his enlistment was finally approved. After undergoing basic training, he served as a translator and censor and was stationed in the press department of the High German Command on the Eastern Front. It is possible that he also worked as a military artist around this time, and some of his drawings may have been made in the course of his service.

Later on he was sent to the front, where he took part in combat against the Russians. His actions during this period resulted in Struck being awarded the Iron Cross for “courage in the face of the enemy.” In July of 1917, he returned to headquarters and served as the officer in charge of Jewish affairs in the territories under the Eastern High Command’s jurisdiction. It was in this role that Struck came face to face for the first time with the Jews of Eastern Europe and learned about their lifestyle. In his wartime sketches, Struck also drew the portraits of the Jews he met, their towns, and their way of life.

Another work which Struck published following his military service was a collection of portraits of prisoners of war. Throughout the course of the war, the Germans held millions of hostages in their custody, mainly Russians and French. At some point, the Germans decided to document the prisoners’ faces, or, in Struck’s words, to create “a collection of the different types of hostages in our custody.” Struck was granted permission to visit the camps for a period of two weeks, creating the collection with an anthropologist named Felix Ritter von Luschan, who recommended that Struck also consider “anthropological aspects.”

After the war, Struck also served as a consultant to the German delegation at the Versailles Peace Conference on issues pertaining to Eastern European Jews.  He continued his activity in “Mizrachi” and in 1923 decided that his Zionist vision impelled him to immigrate to Mandatory Palestine. He settled in Haifa, where his former home, “Beit Hermann Struck” still stands in the Hadar Carmel neighborhood. Today it serves as a museum for his work and also displays the works of other artists in the fields of printing and lithography.  Struck’s other works are on permanent display at the German-Speaking Jewry Heritage Museum in the Tefen industrial park in Northern Israel. The museum’s archive also contains the works attached to this article.

We would like to thank the director and curator of the museum, Ruth Ofek, and the director of the German-Speaking Jewry Heritage Museum archive, Judith Bar-Or, for their assistance in preparing this article.

Most of the material from the German-Speaking Jewry Heritage Museum archive is scanned and available for viewing on the Archive Network Israel website. To see more of Hermann Struck’s works from World War I, as well as other items, click here.

An Enthralling Journey: The Changing Land of Israel Over Three Centuries

The 1929 Palestinian Riot Caricatures That Were Banned by the British