A brilliant scientist as well as a prophet of doom counting down to the End of Days. A gifted physicist and a messianic mystic. Isaac Newton was a man of many contradictions. 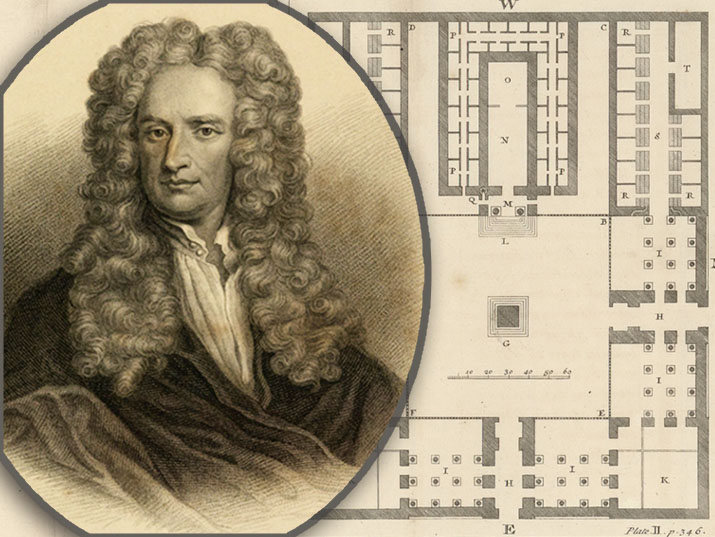 Physicist Isaac Newton did not pull any punches when it came to his criticism of the church, which was perhaps not surprising considering he was one of the most famous scientists to have walked the earth. What many are unaware of, is that Newton devoted much of his time to the study of ancient history, alchemy and biblical interpretation. He wrote essays on the structure of the Jewish Temple and the Tabernacle, and even attempted to calculate when the End of Days would occur. As part of these pursuits, Newton studied the Hebrew language and applied it in his theological writings.

When Newton’s estate was donated to the University of Cambridge, university representatives were not interested in his theological writings and refused to accept them. These papers remained with his beneficiaries and, in 1936, they decided to put them up for auction. Abraham Shalom Yahuda, a biblical scholar who was born in Jerusalem, managed to purchase a majority of the manuscripts. Following his death, Yahuda’s archives, including the Newton manuscripts, were donated to the National Library of Israel in accordance with his wishes. They finally arrived in 1967.

So how are Isaac Newton’s theological writings resolved in light of his monumental scientific contributions? Albert Einstein, who understood the significance of these manuscripts, sent a letter to Avraham Shalom Yahuda which answers this very question:

Newton’s writings on biblical subjects seem to me especially interesting because they provide deep insight into the characteristic intellectual features and working methods of this important man. The divine origin of the Bible is for Newton absolutely certain, a conviction that stands in curious contrast to the critical skepticism that characterizes his attitude toward the churches. From this confidence stems the firm conviction that the seemingly obscure parts of the Bible must contain important revelations, to illuminate which one need only decipher its symbolic language. Newton seeks this decipherment, or interpretation, by means of his sharp systematic thinking grounded on the careful use of all the sources at his disposal.

While the formative development of Newton’s lasting physics works must remain shrouded in darkness, because Newton apparently destroyed his preparatory works, we do have in this domain of his works on the Bible drafts and their repeated modification; these mostly unpublished writings therefore allow a highly interesting insight into the mental workshop of this unique thinker.

P.S. I think that it is wonderful that the writings will all be kept together and made available for research.”

And so, without any further delay, let’s examine some of these documents…

The text below dates back to 1710 and, like other writings from this collection, contains content from two seemingly unrelated fields. At the top of the page are calculations for Queen Anne’s currency tax. Newton was appointed Master of the Royal Mint in 1700, a post he held until his death in 1727. The lower part of the page contains commentary on the concept of the Trinity. Newton first discusses Sabellianism – a doctrine that argues that divinity is embodied in one entity, alternating between the Father, the Son, and the Holy Spirit. Newton believed that the Hebrew Scriptures and the New Testament present God as one entity (the Father). He was of the opinion that men and women do not possess souls and that eternal life could only be achieved with the resurrection of the dead. Newton believed that Jesus was the son of God in the literal sense, not an embodiment of God himself. In his eyes, Jesus was not mortal, as he was not born to a human father. The denial of the Holy Trinity and the existence of the eternal soul were considered heresy by the Catholic Church and the Church of England, under whose auspices Newton lived and worked. Therefore, he was forced to keep his views secret, managing to evade the watchful eye of the Church.

This is a page from an essay of Newton’s, which contains rules for interpreting the language and words of the Bible:

The document, part of the collection at the National Library, dates to the period of 1670 to 1680. On this page, Newton presents a systematic approach for interpreting symbols appearing in biblical prophecy. Having identified the significance of the symbol by comparing various scriptures, its significance could, theoretically, be applied to the entire Bible.

The first rule, for example, deals with the symbol of “The Beast” which, according to 17th-century commentators, relates to political entities:

To observe diligently the consent of Scriptures & analogy of the prophetic style, and to reject those interpretations where this is not duly observed. Thus if any man interpret a Beast to signify some great vice, this is to be rejected as his private imagination because according to the style and tenor of the Apocalypse & of all other Prophetic scriptures a Beast signifies a body politic & sometimes a single person which heads that body, & there is no ground in scripture for any other interpretation.

This is a manuscript written by Newton titled “Notes on the Temple,” which contains observations on what he believed to be the sacred architecture and geometry incorporated in the structure of the Temple of Solomon, as well as customs that were practiced during religious rituals.

The manuscript was written between 1675 and 1685, and includes text in Latin, Hebrew, Aramaic, and Greek.

Throughout the manuscript we can clearly see several instances in which Newton uses Hebrew script. For example, he analyzes the use of the Hebrew root רצף (rezef) and its modifications רצפה and רצפת (rizpah, rizpat), which can mean “sequence”, “floor” or “flooring”. The Aramaic words תא חזי (ta hezi) and תא שמע (ta shema) also appear in Hebrew script. These Talmudic phrases mean “come and see” and “come and hear”, respectively. All of the Hebrew script appears alongside Latin translations and explanations.

In the left column, near the top of the page, we can see a Hebrew biblical verse, complete with vowel notations: Baruch shem kvod malchuto l’olam va’ed (“Blessed be the name of the glory of His kingdom forever and ever”). According to Midrash, when Moses ascended Mount Sinai to receive the Ten Commandments, he heard the angels speak this verse to God.

Also in the left column of the page, we see commentaries from a Spanish Jesuit on the descriptions of the Temple that appear in the Book of Ezekiel.

To Newton, The Temple held significance for three main reasons. First, Newton saw the Jewish Temple as a model of the universe. He believed that the Temple in Jerusalem, and the courtyard surrounding it, was a model of the heliocentric solar system, with the raised altar (located in the center) representing the sun. Second, Newton’s interest in the architecture of the temple was fueled by his belief that the Temple would serve as the “site of revelation” for the apocalypse. In addition, he believed that the Temple would be rebuilt in Jerusalem (with even greater magnificence than the original) at the onset of the Millennial Kingdom – that is, Christ’s reign on earth.

Like many European scholars of the Renaissance and early modern periods, Newton invested enormous effort in deciphering writings which, in his opinion, contained the secrets of the universe. He believed these secrets were encoded in the sacred texts of ancient civilizations. Guided by this belief, he came to be interested in Jewish thought. He even possessed a Latin translation copy of Sefer Avodah, (also known as the Book of Temple Service) part of Maimonides’ Mishneh Torah. Newton’s copy of the book features his own handwritten notes.

In his essay from the late 1680s, The Philosophical Origins of Gentile Theology, Newton discusses the belief systems of ancient peoples which, he postulates, gradually degenerated into idolatry. He was convinced that early theology included philosophical research in astronomy and physics, with no separation between religion and science. It was this very marriage between the scientific and the theological that he aspired to reconstruct in his own writings.

In the opening section of the essay, he wrote:

“That the theology of the Gentiles was philosophical and pertains to the knowledge of astronomy and the physics of the world system; how the twelve major gentile gods are the seven planets, the four elements and the earthly quintessence.”

Newton’s attempts to derive information from the biblical and Talmudic descriptions of the Mishkan and the Mikdash are rare examples of historical, philosophical documents that attempt to balance religion and science. This unusual combination is reflected in the writings of one of the greatest and most influential scientists of all time.