Zishe Breitbart was known as the "Modern Day Samson" and performed all over the world until his untimely death. 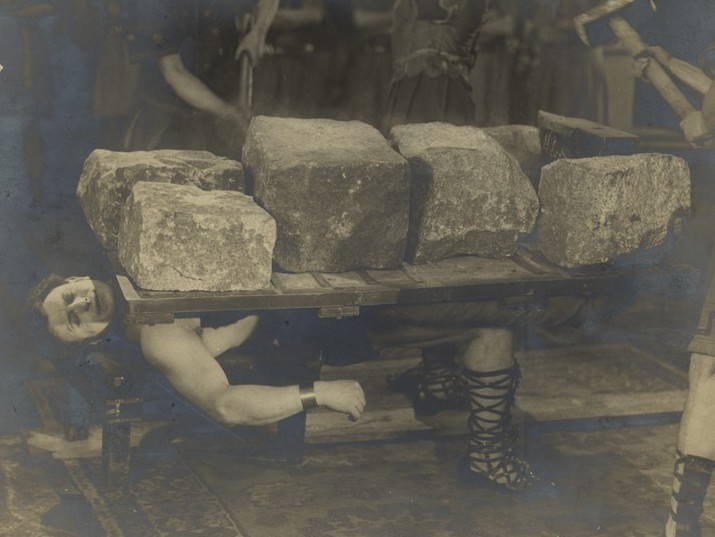 Siegmund Zishe Breitbart, from the Schwadron Portrait Collection at the National Library of Israel

Jewish culture has always preferred brains to brawn, placing more of an emphasis on scholarship than the gymnasium. Jews shine in many fields, but you usually won’t see too many of them in your typical sports highlight reel – and yet, despite the odds, there have been some exceptional Jewish sports stars, such as boxer Daniel Mendoza (champion of England in 1792–5) and baseball’s Sandy Koufax. U.S. swimmer Mark Spitz and Russian gymnast Yelena Shushunova  also won plenty of Olympic medals.

And then there was Siegmund Zishe Breitbart.

Zishe Breitbart was born circa 1883 to a poor family in Stryków, Poland. His father was a blacksmith and Zishe followed in his footsteps but with one twist: much to their customers’ amazement, Zishe could successfully bend metal with his bare hands.

Stryków was under czarist rule when World War I broke out and Breitbart enlisted in the Russian army, only to be captured by the Germans. Lucky enough to survive and be freed, he joined Busch, a German roving circus. Renamed “Siegmund,” he appeared and performed all over Germany as well other European countries, then toured America. He straightened horseshoes and bent iron bars with his bare hands, broke chains with his teeth, and lifted strange and various weights including wagons loaded with passengers – and even the occasional elephant.

Settling in Germany, Breitbart married a rabbi’s daughter and fathered a son. Performing his one man show, he solidified his reputation among Eastern European Jewry as the Iron Man, the World’s Strongest Man, and of course, the Modern Day Samson.

Of the four posters preserved in the Central Archives for the History of the Jewish People, a couple are particularly large. One, printed in Cologne, shows the champ chomping on chains. The date and time of the act were left blank, to be filled in later. The other three were printed in Stanisławow – now Ivano-Frankivsk, part of Ukraine – in Polish as well as Yiddish, indicating that Breitbart’s fans weren’t all Jews.

As president of the Maccabi Berlin sports federation, Breitbart symbolized a Jewish renaissance. He never hid his Jewish identity or his Zionism. Some claim he visited Palestine, but there are no records of such a trip. The rumors probably testify more to the breadth of his popularity, extending even as far as the Middle East.

Breitbart’s career was cut short after just six years by a tragic work accident. While driving a spike through a thick pile of tin sheets – using his hand as a hammer of course – he was stabbed in the knee by a rusty nail, resulting in blood poisoning. Antibiotics had yet to be invented, so he struggled against the infection for eight weeks, submitting to ten operations, including the amputation of both legs. He died on September 29, 1925, the 24th of Tishrei,and was buried in the Adass Yisroel cemetery in Berlin.

The funeral of this Jewish celebrity was covered by Doar Hayom (The Daily Post), published in Mandatory Palestine by Itamar Ben Avi (son of Eliezer Ben Yehuda, the father of modern Hebrew). The article was entitled “On the Death of a Second Samson:”

The massive funeral was attended by thousands of Jews and Christians. A good few kilometers around the graveyard were jammed with hundreds of cars filled with people coming to the funeral. There were so many people that the elderly cemetery officials declared they couldn’t remember ever seeing such an enormous Jewish funeral in Berlin. The police had to send numerous constables out to maintain order and supervise the procession.

Cameras and filming equipment were set up on the surrounding roofs and photographed various scenes throughout the funeral….

Chief Rabbi Dr. [Esra] Munk delivered the eulogy, emphasizing that the deceased had won the hearts of millions…. [Munk] particularly praised the deceased for disregarding all the glory and honor accorded him by the world at large, for Breitbart never forgot he was a Jew. He always came back to be with his fellow Jews, wherever they might be, telling them how happy he was that today Jews could claim the strongest man in the world as one of their own….     A black flag belonging to the Berlin Maccabi sports federation, of which Zishe Breitbart was honorary president, fluttered throughout the funeral. Telegrams of condolence arrived, and wreaths were laid on the grave by sports associations from Paris, London, Rome, Vienna, and Warsaw.
(Doar Ha-yom, 7 Marheshvan 5686, October 25, 1925)

A version of this article first appeared in Segula Magazine, October 2016, Issue 34.