Through the pinkas of a given community, we can assess the life of the individual and the kahal in all its breadth and depth 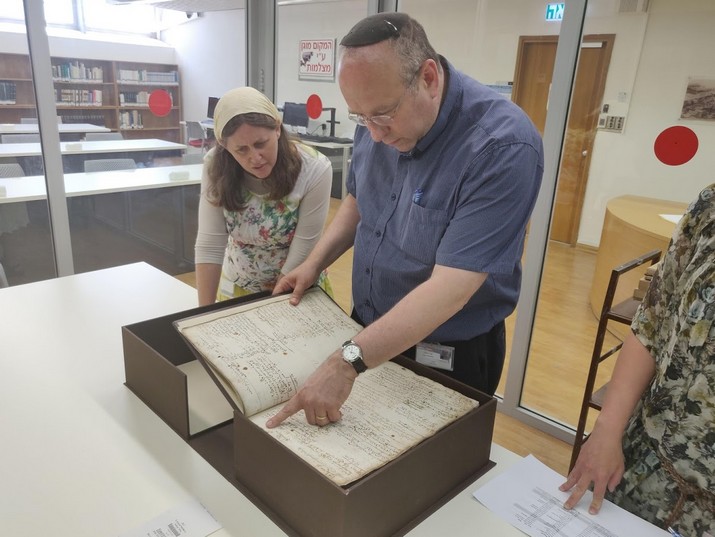 The word pinkas means “notebook.” These notebooks were widely used in pre-modern Jewish society by both communal organizations and individuals.  Mohalim (Jews trained in the practice of Brit Milah) would keep pinkasim to note and track the circumcisions they had performed, businessmen kept pinkasim to note the various deals they made, students kept pinkasim into which they copied the texts they were studying, and mystics kept pinkasim in which they noted their sins (and sometimes their dreams, too).  Thus, the term pinkas was distinguished from the “Sefer” – book – in both its physical form and the way texts were entered into it.  The pinkas was a notebook, initially of blank pages, into which its owner penned various texts or entries that were of interest to him from time to time.

This format of record keeping was, of course, very useful for institutions, Jewish and non-Jewish alike, that wanted to keep a running record of their activity.  European Jewish society in the early modern age (about 1500-1800 C.E.) was a complex web of institutions – from the small, local guilds (“hevrot ba’alei melakhah”) to the great trans-regional councils such as the Lithuanian Jewish Council and, of course, the Polish “Council of Four Lands.”  Pinkasim or fragments of pinkasim from these different institutions have survived over time, giving the distinct impression that maintaining a pinkas was an integral part of early modern Jewish organizational life.

The Pinkas Hakahal – the record notebook of the community’s governing council – formed only one part of a complex of communal pinkasim. Community administration was made up of many other bodies each of which kept their own pinkas.  The gabbaim, the communal treasurers, would keep a pinkas, noting synagogue organization, particularly as it related to financial and charitable disbursements, as well as the different decisions they made to regulate their work.  The judges of the Beit Din, the rabbinic court, would a keep a pinkas to record the cases they heard, and the tax assessors would keep a record of the taxes assessed for and paid by each community member. The Kahal also kept a pinkas and as the community’s supreme governing body, its pinkas might be viewed as the most important. When brought together, these various record notebooks make up what we might call “pinkasei ha-kehillah” which provide a rich and multifaceted view of the broad sweep of Jewish communal life.

Grasping how the pinkas functioned, and understanding its role in the life of both the community council and the community as a whole is no easy task. As Prof. Israel Bartal of the Hebrew University has shown, there are many layers of misconceptions about the early modern pinkas kahal which developed in the various cultural and political milieu of eastern European Jews in the nineteenth and twentieth centuries, but were picked up and repeated, often uncritically, by future generations of scholars.  The maskilim of the nineteenth century adopted a view of the community pinkas as somehow embodying the entire history of the early modern Jewish community – an institution and a history they despised. In his satirical novel, “Kvurat Hamur – An Ass’s Burial,” Peretz Smolenskin was scathing:

A pinkas can be found in every town where Jews live, and in it, they and everything that happened in the town will be written as an everlasting memory.  There is mention of girls who lost their virginity by accident and through rape, of denouncers and those who caused Jews to lose money to non-Jews, of those who rebelled against communal authority and those who ate non-kosher meat, of those who stole the silver from synagogues and those who carried a kerchief on the Sabbath.  [It tells of] the house that was destroyed by demons and ghosts, and of sinners whose sins or mockery of the burial society caused the outbreak of plague.  In this text will be inscribed all those who transgressed the law of Israel and in their death will they pay for their sins, for they will be given an ass’s burial.

In the twentieth century, Jewish nationalists of many different stripes took an equally romantic, but highly positive, view of the pinkas. Many of them viewed it as the ultimate expression of the Jews’ autonomous bodies of the early modern period, bodies the nationalists saw as foreshadowing the development of the Jewish national institutions they wanted to develop.   Others took it as somehow embodying the spirit of the nation.  Avraham Rechtman, who participated in An-Ski’s great ethnographic expedition of 1912, expressed this in lyrical terms:

The pinkas is the mirror of the people’s life (folks leben) in past generations.  The pinkas reflects the people’s feelings, its joys and its sadness, how it expressed its concerns and what made up its demands.  Through the pinkas we can assess the life of the individual and the kahal in all its breadth and all its depth.  We can learn from them about the way of life as it was, as well as relations within society, between one society and another, between one community and another, and also of the Jews’ attitude towards the outside, non-Jewish world which surrounded them.

What was common to both, of course, was a highly romanticized view of the pinkas as embodying the history and spirit of the Jews as a whole, though the values they imparted to it were quite different.

In the face of this product of the overheated Jewish imagination, it is probably worth engaging in a more sober discussion of the pinkas kahal.  Unfortunately, despite the deepest desires of both maskilim and Jewish nationalists, the pinkas was not a kind of “communal memory.”  The vast majority of entries dealt with highly technical matters, such as taxation and other economic issues that fell into the purview of the kahal. Major events in the community’s life were recorded only in so far as the kahal had to make decisions or regulations to deal with them.

In addition, the pinkas was not available to the community but was zealously guarded by the members of the Kahal.  The Krakow community constitution of 1595 specified that the pinkas hakahal should be in the hands of the two community scribes (called at that time, “edim demata”) and locked away in a box that only they could open.

In truth, the pinkas kahal in the Polish-Lithuanian Commonwealth was very much a technical document.  Only matters dealt with by the kahal were included in it.  These could, of course, be of enormous significance for running the community though not in the romantic idealist way previously envisioned.

Crucial topics such as the question of population control through the granting or retraction of residence rights (“hezkat hayishuv”) were included in a pinkas. This was sometimes connected with regulations concerning dowries since only those wealthy enough to pay handsome dowries would be able to settle their children in the community.   The management of the annual elections to the kahal was another issue that would be included.  Other issues dealt with by the pinkasim include the management of communal charity (most often done by means of regulations concerning the gabbaim), the employment of community officials (cantors, slaughterers, doctors, midwives, teachers, etc.), most particularly the rabbi, and relations with the non-Jewish authorities.

Though the Pinkas Hakahal does not provide a window into the Jewish soul, for the good or the bad, it does shed a great deal of light on how Jews organized their communities and ran their lives hundreds of years ago.

The National Library of Israel, together with the Central Archives for the History of the Jewish People in Jerusalem, holds the largest collection of pinkasim in the world. Through international academic co-operation, the Pinkasim Collection aims at locating, cataloging, and digitizing all surviving record books, making them freely available. At the first stage of the project, the focus is on pinkasei kahal, the pinkasim of the central governing body of Jewish communities. On June 20th, the National Library hosted an event marking the launch of the Pinkasim Collection, which featuring experts from around the world.   If you liked this article, try these: Coffee Houses Open on Shabbat… With Rabbinic Approval