A Diary from Jerusalem Under Siege

“I’m very thirsty and there isn’t a drop of water in the house. I must go down to the street, perhaps I'll find something to drink, and thus I must cease my writing.” A peek into the siege diary of Menachem Zvi Kadari, a resident of the Old City during Israel's War of Independence. 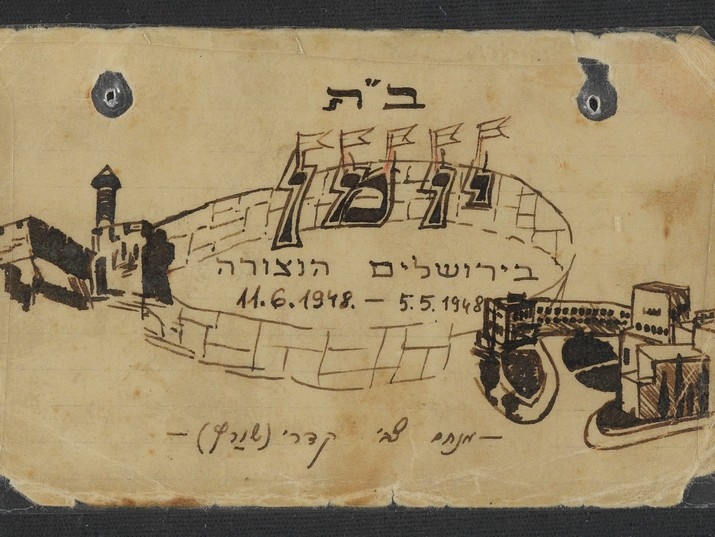 Today the residents learned that the Jerusalem front suffered a new heavy blow: the Old City has fallen … the defenders surrendered after half a year of resistance and heroic defense, when few stood against many, without weapons and equipment in the face of a well-equipped enemy. It is indeed interesting that the fall of the Old City didn’t make as much of a sad impression on the city as the previous difficult blows (Gush Etzion, Sheikh Jarrah, etc.), as if there was even a certain sense of relief: finally, it’s over, the women and children were spared, most of the defenders also remained alive, even if they will spend some time in captivity; Thank God, for that too—such are the thoughts, more or less, of a simple Jerusalemite.

With these words, Menachem Zvi Kadari describes one of the most difficult and desperate moments in the battle for Jerusalem during the Independence War. The 23-year-old, Hungarian-born Kadari, a student of Bible Studies and Hebrew at the Hebrew University, kept a diary detailing the sequence of events throughout the period of the siege of the Old City. In clear and beautiful handwriting, on the back of small index cards, accompanied by delicate illustrations, he provides a vivid and authentic account of public opinion among the people of the besieged Old City, and from the cards, colorful and fascinating Jerusalem characters spring to life. Here are some of them:

At the corner of HaRav Kook Street I suddenly see the old Yemenite man sitting by the wall and reading from the holy Zohar with amazing diligence; everything remains the same with him, he sat and read here before the siege and continued in times of danger, through the heaviest bombardment, and continues to sit here even now.

The boys in the student dormitory on Jaffa Street had a private laundress, a Kurdish woman who always came to collect the laundry and two days later, she would return it clean and neat. […] Every time she heard about young people who died, her heart seemed to sink. She has no children of her own, but all of Jerusalem’s youth are hers and she feels pain and sorrow over the loss of each of them […]  When we asked her “When will you bring our clean laundry,” she answered, looking up with her eyes: “Can one say today when I will come? God knows when I will be able to come.” […] The last time, a few days before the cease-fire, she took the laundry, but did not bring it back again … a wicked shell hit her … her husband brought our clean whites, which her own hands were not favored to bring back [to us] … Many have been your casualties Jerusalem; all have fallen in the fulfillment of their duties, who in defense, who at work … May they atone for our sins!

On August 8th, during the second break in the fighting, Kadari sees:

Four young men with beards and sidelocks, dressed in caftans and beaver hats, walking in front of me along the street—they were Neturei Karta Hasidim—and behold the wonder, a truly strange and unusual sight: they are holding rifles in their hands! […] Can this really be true? Parading about the streets of the city of Jerusalem are young men in hasidic garb carrying guns and other weapons of destruction! Who could have prayed that something like this would ever happen?

But beyond the characters, Kadari best describes Jerusalem shifting between despair and hope. He tells of the eyes turned to the great powers, the ambivalence of the Jerusalem street towards the offers of the U.N. mediator Count Folke Bernadotte, the reactions of the Arab countries, the rationing of food, and the tense hours of waiting – for bread and sustenance, but even more so – for news and information about what was going on in the rest of the country. Thus, for example he describes his own dismal situation, while reporting on the announcement from Tel Aviv:

This Sabbath was especially eventful, a historic day in Jewish history: the State of Israel was declared and immediately recognized by America and 38 other countries. Yet, there are two sides to every coin: the armies of the Arab countries began their invasion from all directions and there are already bitter consequences: they have conquered several settlement points […] the battle in Gush Etzion is completely over. The entire area has been captured and the fighters taken captive. Oh! Ten years of hard work have come to nothing! Three settlements of the religious Kibbutz movement , to which the eyes of the youth in the Diaspora were drawn, were wiped off the map […] Oh, what has befallen us!  (“I’m very thirsty and there isn’t a drop of water in the house. I must go down to the street, perhaps I’ll find something to drink, and thus I must cease my writing.”).

The siege of the Old City lasted until the 11th of June, during which there was a terrible shortage of food (“the bread ration was reduced to one hundred and fifty grams and in a few days will be reduced to one hundred grams per person; oh well, this is real hunger, but one can suffer a bit more!” [June 6]. Following the end of fighting in Jerusalem, the situation improved significantly, (“In exchange for work they pay forty grush along with breakfast and dinner every day. By this arrangement, after just two days I have already been able to loosen my belt buckle and I can’t complain about hunger” [June 25th]).

It is not only existential distress that emerges from the pages of Kadari’s diary, but also his personal thoughts about his future and studies, which were interrupted by the war. He attends political meetings and cultural conferences, keeps himself busy with matters of language (“This afternoon I decided to go home, despite the danger of bombardment—they have already invented a new word for the concept: hafgaza [shelling]; indeed, this is the Jerusalem spirit!”). And once in a while he visits the Jerusalem homes of his teachers Gershom Scholem, Moshe Zvi Segal and others. One of the topics woven throughout the journal is the growing gap between Tel Aviv, the city where the declaration of the State had just been celebrated, and Jerusalem, which is under siege:

It truly seems from the papers that there is still life in Tel Aviv, despite everything. Only today was the public prohibited from going to the beach; the theaters and cinemas are running as usual […] only in Jerusalem we sit for months on the watch, on the frontline. The first to be tested is the city of Jerusalem. Perhaps it will be the first to be redeemed?

The institutions of the young state and the IDF (which until the day before was the “Haganah”), are concentrated in Tel Aviv, while Jerusalem is still sympathetic to members of the underground. With the outbreak of the fighting, Kadari, the native of Tel Avivi, was “stuck” in Jerusalem, and throughout the diary, he describes attempts to return home. His description of one of the most famous affairs of the period—the firing on the Irgun ship Altalena as it approached the shores of the coastal city, is mixed with a dose of racism:

There is explosive news on the internal political front: the Irgun, which declared its joining the ranks of the Haganah and full obedience to the Jewish government  institutions, brought an arms ship for itself and began unloading it, with the clear intent of violating the truce […] war is these people’s life, war for the sake of war. Internal danger awaits the Yishuv, heaven forbid, from these ne’er do wells, and careless adventurers. […] No wonder that most of the members of the Irgun and Lehi come from the Sephardic communities, and if so, it is clear from whence the fanaticism and blind enthusiasm for their actions, good or bad.

Kadari’s diary ends with his departure for Tel Aviv on August 18th. After the fighting ended, he renewed his studies at the university. Kadari submitted his doctoral dissertation in 1953 and later was appointed a lecturer at Bar Ilan University. In 1971 he became rector of the university and a member of the Academy of the Hebrew Language. In 1999, he was awarded the Israel Prize for Study of the Hebrew Language. 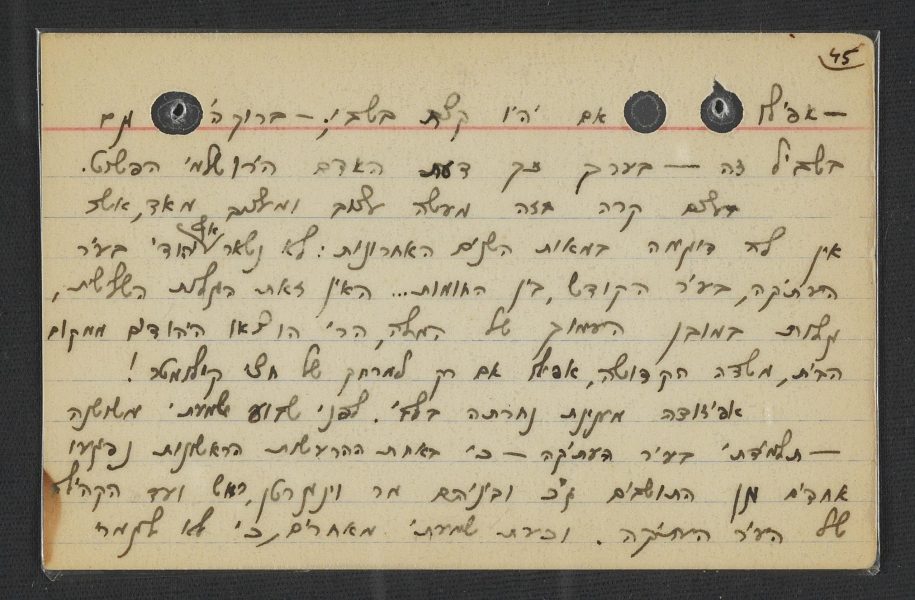 “The opinion of a simple Jerusalemite”

Menachem Zvi Kadari died in 2011. His personal archive was recently deposited in the National Library and includes, besides this diary, fascinating documents about underground rescue activities in which he took part in Hungary and Romania after the Nazi invasion, in addition to drafts of his research papers and lectures, as well as personal documents and correspondence.

Kadari’s full diary is held in the archives of the National Library of Israel.

The First American Consul Happened to Have Jerusalem Syndrome