The Kabbalistic Ceremony That Helped to Identify the Fallen Soldiers

When the thirty-five fallen soldiers of a legendary military convoy were brought for burial at Mt. Herzl, following Israel's War of Independence, only twenty-three could be identified with certainty. To resolve the problem, Rabbi Aryeh Levin performed a little-known Kabbalistic ritual. 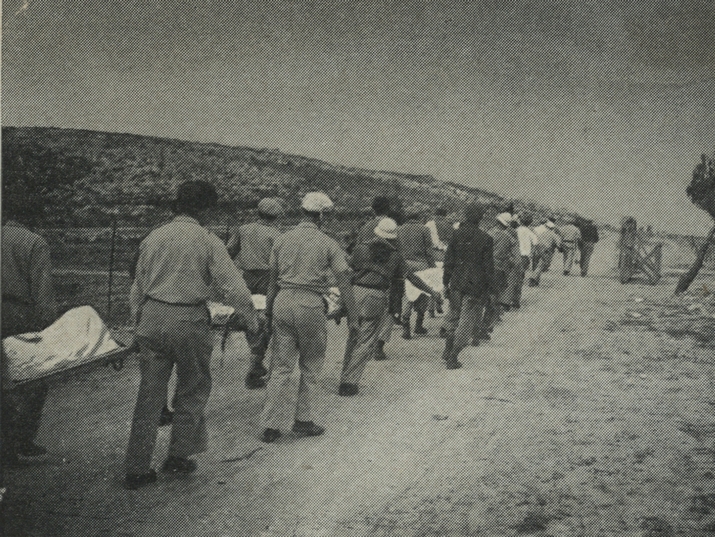 The funeral of the Convoy of the Thirty-Five, 1948. Photo: Historical Archives of Gush Etzion

Twice, the funeral procession descended from the village to the lower slopes of the hill above the wadi, to where a mass grave had been dug in the young pine forest. Those carrying the stretchers with the dead, soldiers, members of the settlement, and relatives walked silently down the sloping path. A heartbreaking sight was a mother walking silently behind a stretcher, her hand supporting the head of her only son, which protruded slightly from under the cover draped over the stretcher—as if her son were alive and his mother’s caress would soothe him (“Yoman Kfar Etzion” [Hebrew], January 18th, 1948).

On the night between the 15th and 16th of January, 1948, thirty-five members of a convoy, commanded by Danny Mass, set out on a mission to deliver supplies to besieged Gush Etzion (the “Etzion Bloc”, in English), a cluster of settlements in the West Bank, just south of Jerusalem. Before dawn the unit was discovered and surrounded by thousands of Arab fighters.  All thirty-five members of the convoy were killed in a battle that lasted the entire day. They have come to be known in Hebrew as the Lamed-Heh (ל”ה), after the two letters which together indicate the number thirty-five.

Two days later, the bodies were discovered by Hamish Dugan, chief of the British police in Hebron. He intended to bring them to burial in Kfar Etzion, but before he could so, Arabs residents of the nearby village of Surif mutilated the bodies beyond recognition. This led, later, to the problem of identifying the dead.

A few months after the end of the War of Independence, in late 1949, the Chief Rabbi of the Israel Defense Forces, Shlomo Goren, initiated a mission to bring the bodies of Gush Etzion’s fallen defenders, including the Convoy of the Thirty-Five, for reburial at the national military cemetery on Mount Herzl.

The bodies had been identified for the temporary burial in Kfar Etzion with great effort, but after the fall of Gush Etzion, the burial details were lost including the information of who was buried where. As a result, when the bodies were brought for permanent burial at Mount Herzl it was necessary to re-identify the bodies, and only twenty-three of them could be determined with certainty. Twelve graves remained unidentified. The families of these twelve fallen soldiers approached Rabbi Tzvi Pesach Frank, the Chief Rabbi of Jerusalem, who suggested they contact Rabbi Aryeh Levin and ask him to perform a Kabbalistic ceremony known as Goral HaGra [“The Lottery of the Vilna Gaon”] in order to identify the bodies.

The Verses that Miraculously Provided Answers

Rabbi Aryeh Levin was known for his kindness. He was called the “Rabbi of the Prisoners” for his habit of writing letters to prisoners and visiting them every Sabbath to visit them in their jail cells to lift their spirits during the British Mandate period. He was particularly known for his visits to the imprisoned members of the underground movements and those headed for the gallows. He also regularly visited the Hansen Leper Hospital in Jerusalem’s Talbiyeh neighborhood to offer encouragement and comfort to the residents. He himself participated in the funeral arrangements and identification of the bodies before the burial of the fallen of Kfar Etzion in 1948.

Goral HaGra, a ritual attributed to the Vilna Gaon (Rabbi Elijah ben Solomon Zalman), is conducted by randomly opening a bible and linking the verses on the page to the matter at hand. The purpose of the ceremony is to find answers to a question of great importance. If there is no hint in the verse, one skips to the next verse that begins with the last letter of the previous verse.

At first, Rabbi Levin refused to perform the mystical ritual, but after being convinced that it would help the bereaved families gain a measure of closure—he acquiesced. The Rabbi was given both a list of the fallen whose burial places were unknown and a sketch of the unidentified graves (there was no need to dig up graves or desecrate the existing burial sites). He went over the sketch, one grave at a time, and tried to affix a verse to each.

According to the book by Simcha Raz, Ish Tzadik Haya (“There was a Righteous Man” [Hebrew]), the Rabbi’s work was miraculously swift. At first, a few general verses appeared that contained hints of the letters Lamed-Heh followed by eleven verses in rapid succession that hinted at the names of the dead according to the order of their burial in the sketch. Some of the verses even contained the specific name of the deceased. In others, there was a clear hint. No verse was found for the body of the twelfth fallen soldier, Jacob Kotik z”l, but at this point there was no need, since the identification of the other eleven left no doubt as to where he was buried.

“It was Thursday, night time. They went upstairs to the yeshiva located in the attic of the small, modest house of Rabbi Aryeh, in the Mishkenot Yisrael neighborhood (a small neighborhood near the Mahane Yehuda market). In the darkened hall, twelve candles were lit, which illuminated the eastern wall next to which was the Torah Ark. Those present included: Rabbi Aryeh along with his son-in-law and son. Two of the parents of the deceased were also in attendance: Mr. Reuven Mass and Mr. Yitzhak Dov HaCohen Persitz. They began with the recitation of Psalms.

A sacred silence prevailed. The burning candles added to the sense of awe. They opened the Bible randomly without looking for a particular page. After each opening, they leafed through it again, seven times, and repeated the act seven times and decided that the findings would determine to whom each grave belonged before marking the tombstone. And this is the rule that was followed: the last verse on the page must include the name or a hint of the name of one of those whose identity is being sought.”

Sometimes it’s best to let the departed be. Through the generations, various rabbis have voiced reservations about this custom, which is supposedly aided by magical means. Despite the progress of science, to this day none of the members of the families of the twelve have asked for the bodies to be identified using more advanced methods such as DNA markers, and the fallen of the Convoy the Thirty-Five remain buried based on the identification determined by the Goral HaGra.

Rabbi Levin lived for years on Mount Gerizim Street in the Mishkenot Yisrael neighborhood in Jerusalem. After his death, this street as well as streets in other cities in Israel were named after him. In July 2005, the Israel Coins and Medals Corporation issued a commemorative medal and a stamp bearing his portrait was also published.