Home > Israeli Memorial Day > Giving a Face to the Fallen: Uncovering the Life of the Late Menachem Baumgarten
Diaspora

In May 1943, a mysterious Hebrew soldier was among the hundreds killed when German bombers struck the British ship, SS Erinpura. Documents found in the National Library shed light on the life of a young man who perished at sea 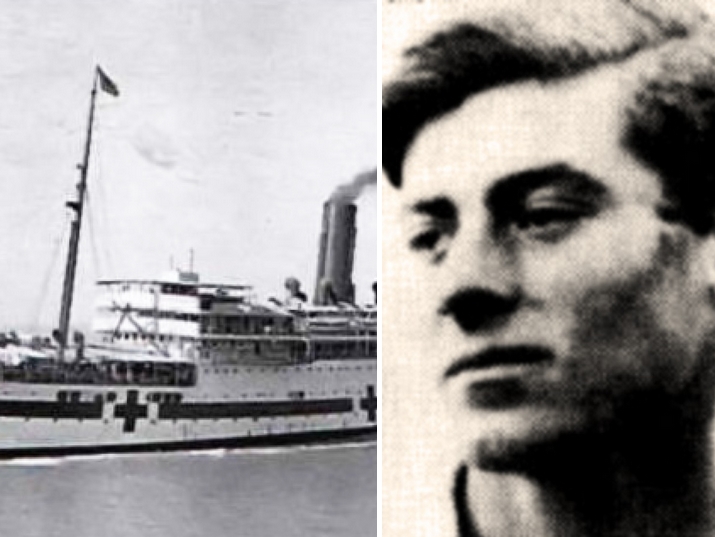 The SS Erinpura and the late Menachem Baumgarten

In May 1943, a soldier from the Land of Israel, Menachem Baumgarten, was killed along with 138 of his Jewish comrades when German bombers struck the British ship, SS Erinpura.

Details of Baumgarten’s story and identity were sparse. But, after diligent research, utilizing the resources of the Central Archives for the History of the Jewish People, details and documents have been uncovered that offer at least a partial picture of the young Jew who perished at sea on his way to fight the Germans.

May 1, 1943. A convoy of British ships en route from Alexandria to Malta is spotted and attacked by a 12 plane German bomber squadron. The brunt of the attack is focused on the SS Erinpura, carrying more than a thousand soldiers and crew members. 664 soldiers are killed, including 139 soldiers from the Land of Israel who had enlisted in the British Army.

Among those killed in the attack is Menachem (Leopold) Baumgarten. Information about the young man was almost nonexistent. Other than his name, his year of birth and a few notes regarding his activities and movements throughout the years, there was almost no record of the young man’s existence.

The volunteer organization, “Giving a Face to the Fallen“, initiated an attempt to obtain more information about Baumgarten by contacting the Central Archives for the History of the Jewish People at the National Library. The archive staff meticulously combed through thousands of files, mainly focusing on official appeals to immigrate to the Land of Israel from Vienna, which saw a great influx between the years 1938-1940.

The search finally bore fruit when the archive staff discovered Baumgarten’s file in the Vienna Jewish Community Archives. The file revealed previously unknown details about the young soldier. The document included Baumgarten’s exact birthdate and birthplace, as well as a small amount of detail about his background and family. Documents found in the Zionist Archives provided additional information, including the date of his emigration to Mandatory Palestine (August 16, 1939). His Youth Aliyah card, which was also unearthed in the search, documented Menachem’s placement at Kibbutz Tel Yosef upon his arrival in the Land of Israel and his subsequent departure from the Kibbutz on June 8, 1941, in order to enlist in the 462 Transport Company. The Yad Vashem archive also provided details that further serve to complete a portrait of Menachem Baumgarten.

Here are some of the documents found in the Vienna Archive: 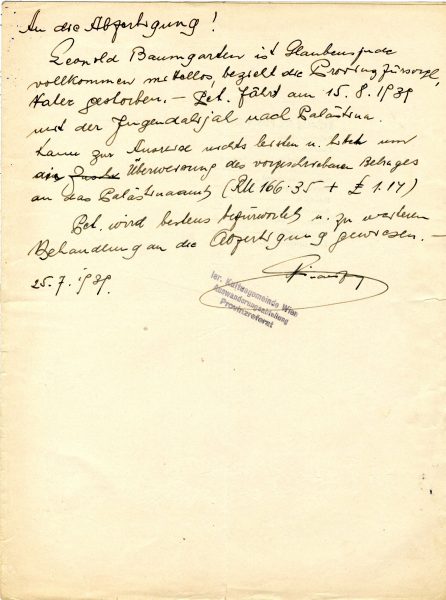 Translation of the above document:

Leopold Baumgarten, a Jew, according to his beliefs. Completely without means, applied to the social welfare office in his area of residence, his father is deceased.

Applicant is traveling with Youth Aliyah to Palestine on 15.8.1939.

In regard to his travel, he cannot afford to pay for his travel expenses, therefore he directs the expenses of the (immigration) contract to the Palestine Office (RM 166.35 + £ 1.14).

The applicant is referred to final processing.