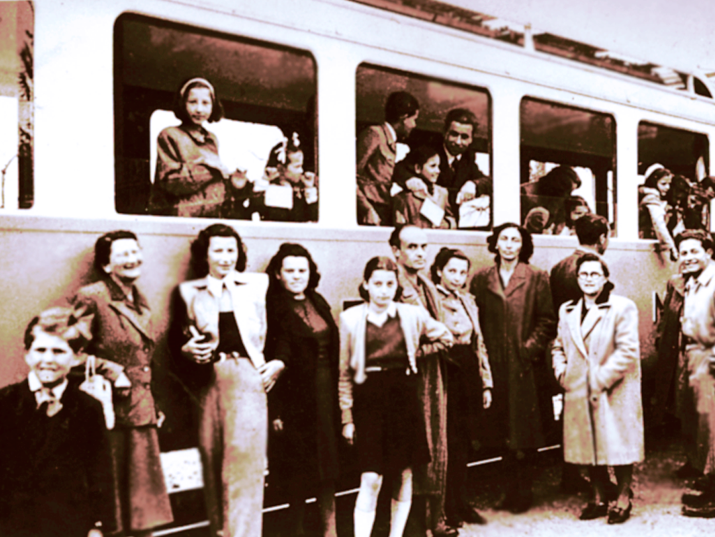 Kasztner train passengers, travelling from Budapest, via the Bergen-Belsen concentration camp, to Switzerland, August or December 1944

When the atrocities of the Holocaust began to unfold, many attempts were made by both Jewish and non-Jewish organizations and individuals to influence and bribe powerful officials in the hopes of sparing as many human lives from the fate that awaited them at the hands of the Nazis. In 1944, the efforts of one man bore fruit and, while the number of those rescued was small in comparison to the number of Jews in danger, those who were included were spared the gruesome deaths that claimed so many others.

Rudolf (Rezső) Israel Kasztner was a Jewish Hungarian journalist and lawyer who helped found the Relief and Rescue Committee in Budapest that worked to smuggle Jewish refugees from Poland and Slovakia into Hungary in the hopes of escaping the Nazis. With the German invasion of Hungary in 1944, the Committee refocused its efforts to negotiations with the Nazis – in the hopes of exchanging human lives for military supplies and trucks. This effort came to be known as “Blood for Goods.”

In the summer of 1944, as a part of his efforts, Kasztner met repeatedly with Adolf Eichmann who was charged with deporting Hungary’s Jews. In late June, Kasztner succeeded in convincing Eichmann to spare the lives of some 1,700 Jews. Kasztner, along with a committee of other prominent Jews, drew up the list of those to be included in a transport that would leave Hungary for the safety of the neutral state of Switzerland.

On June 30, 1944, 1,684 Jews boarded a transport that was dubbed “Noah’s Ark.” The group was largely Hungarian and consisted mostly of Jews of prominence – those with money and influence – and close acquaintances of Rudolf Kasztner, including his family, friends and many people from his hometown of Cluj (Transylvania). This fact eventually brought tremendous backlash on Kasztner following the war.

Unsurprisingly, Eichmann did not stay true to his word and instead of arriving in Switzerland, the transport stopped at Bergen-Belsen where the passengers were detained. A month later, following a new round of intensive negotiations, a new list containing the names of 318 people from among the original passengers was issued and those fortunate enough to be included boarded a new transport for Switzerland in late August 1944. It was only on December 7, 1944, that the remaining 1,354 passengers were released from Bergen-Belsen and sent to their original destination.

These never before published lists of the two transports which departed from Bergen-Belsen were given to the Central Archives for the History of the Jewish People by Rabbi David Moses Rosen. Rabbi Rosen served as the Chief Rabbi of Romania during the Communist period. A copy of the lists was kept by the Bucharest office of the Romanian branch of the World Jewish Congress, along with additional important documentation of Romanian and Transylvanian Jewry from the Holocaust period. A significant portion of the branch’s archive was eventually passed on by Rabbi Rosen to the Central Archives for the History of the Jewish People, where it was recently reregistered by Dr. Miriam Caloianu, who is in charge of the Romania collection in the archives. Among other things, this collection includes important evidence regarding the survivors of the camps in Transnistria, in Northern Transylvania and the Iași pogrom.

In contrast to lists published in the past which revealed the early stages of this process and the original transport, these lists reveal the names of those who arrived at their intended destination and even include the Swiss addresses of the passengers’ new homes. Included on these lists are the names of Kasztner’s family members and the name of Rabbi Joel Teitelbaum, founder and first Grand Rebbe of the Satmar dynasty.

These lists not only attest to the tremendous efforts made by Jewish communities and organizations to rescue their brethren, they are also critical in properly understanding the full unfolding of these events, shedding new light on the plight of the Jewish community of Hungary which saw over 400,000 perish in the Holocaust.

Following the war, Kasztner immigrated to the Land of Israel. In 1953, his negotiations with the Nazis in general and Eichmann, in particular, made headlines when a journalist named Malchiel Gruenwald published a pamphlet accusing Kasztner of being a Nazi collaborator, stating that he negotiated for his own personal benefit and contributed to the destruction of Hungarian Jewry. Kasztner sued Gruenwald for libel, an act that eventually transformed these accusations into an indictment. The presiding judge determined that Kasztner had in fact contributed to the destruction of Hungarian Jewry by selecting his friends, family, and acquaintances as those who would be spared from horrors of the gas chambers.

This decision was overturned by Israel’s Supreme Court in January of 1958, however, before the new decision could be announced, Kasztner was assassinated near his home in Tel Aviv on the night of March 4, 1957. He died of his wounds twelve days later.

The lists from the Kasztner Train have been digitized and can be viewed online here.

If you liked this article, try these: How Bergen-Belsen Survivors Celebrated Independence Learning the Value of a Potato in the Holocaust When Buchenwald Was Liberated: A First Glimpse of the Holocaust