Sensing the dangerous sparks in the air, Miriam smuggled her family to Russia where they were forced to fend for themselves in a Siberian labor camp. 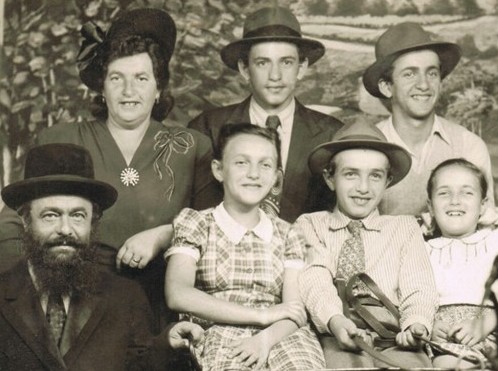 We don’t know how old my grandfather was when he died in 2014.

He did not remember his birthdate and his birth certificate was destroyed along with everything else during the war. All he remembered was that it was warm out during his birthday celebrations as a child and that the celebrations always took place during the week when the Torah Portion of Bereshit would be read after the Jewish New Year. These memories seem to contradict – especially if you have ever examined the weather patterns in Poland.

Yechiel Hecht, my grandfather, was born to a religious Jewish family in Tsanz, Poland. His family moved to the town of Zagosh where his father, Yisroel Hecht-Firer, served as a well-respected community rabbi and worked as a Shochet, a ritual slaughterer. His wife Miriam was a strong, independent and intelligent woman who ran the home and worked alongside her husband as a Shochtke, a job not typically held by a woman, though she certainly did not let that affect her choices.

In the early 1930s, with the rise of the Nazi party, Miriam felt a dangerous spark in the air. She felt instinctively unsettled by the extreme shifts in the political climate and could sense that it was only a matter of time before life would change forever in her hometown of Krakow.

Her intuitions proved undeniably correct when she was out in town running errands and faced a violent altercation with a Polish police officer. The officer shoved Miriam to the ground and shouted anti-Semitic slurs at her as she struggled to right herself.

That same day, Miriam decided her family was no longer safe in Poland and took it upon herself to remove them from the unknown dangers that lay ahead. She gathered every valuable she had in her possession and arranged for a truck to take her family from their home in Krakow over the Russian border to what she believed would be a safe location.  She begged her eight siblings who were also living in Europe to join her, to escape from the horrors that lay ahead but they refused, believing that it was just a passing phase that would fade into the pages of history.

Miriam, her husband, and five of their six children set out to start their new life in Russia. Leibish, their eldest son, was left behind to continue his religious studies in Yeshiva, a decision that ultimately led to his untimely death. When the Nazis invaded, the students were taken out to the courtyard, where they were shot. Leibish was among them.

The family made their way across the border, believing they had left their troubles behind – but trouble caught up with them when the war reached the Russian front. Over 200,000 Jews in Russia, Miriam, Yisroel and their children among them, were torn from their homes and sent to a Siberian work camp.  In this desolate, wintery wasteland, they were forced to fend for themselves. Hundreds of people found themselves living in the same building with nothing but a sheet to divide the spaces between families.

Yisroel was immediately singled out for suspicious activity as a practicing rabbi. He was separated from his family, imprisoned, and forced into a prison work crew where he was subjected to physical labor: chopping and collecting wood for the military.

Miriam took the remaining valuables she had left after paying for passage to Russia and used them to barter with the local officials for wood to feed the fire in the stove in their building. That fire was the only thing that prevented the people living under that roof from freezing to death.

Yechiel, as the oldest remaining son, quickly became the man of the house.  With a mother and four siblings to protect and feed, he put his looks and talent for languages to work for him. Yechiel would wake up at the crack of dawn, put on what little warm clothing he had and hike for hours to a food distribution point where he would pose as a Russian citizen, standing in endless lines in the cold in the hopes of bringing home a hunk of dry bread to feed his starving family.

On the days when he actually managed to get a piece of bread, he faced a treacherous walk back to his building where he was forced to contend, not only with the freezing temperatures but also with muggers and vandals on the road who would accost him and steal his meager rations putting his hours of effort to waste. Beyond the stale bread, the family only ate what they could scrounge up from the fallow fields, usually a lone potato or forgotten onion that they would use to make a watery soup that could feed the crowd living in their shared space.

It was in this way that the Firer family survived the war – on instinct, with endless determination and resistance against those who had left them for dead. After the war, the family managed to reconnect with Yisroel and, after a few months in a displaced person camp where Yechiel and his brother were treated for exposure to Tuberculosis, with their papers proving their Polish citizenship, the Firer family was offered passage to either Palestine or America. Miriam was through with the idea of pioneering and the family chose to join her brother who had emigrated from Poland to New York City in 1920. When they arrived in America, grieving and broken from the horrors they had faced, the family changed their surname to Hecht, Yisroel’s mother’s maiden name, to avoid the associations the word Firer could bring up.

The Hecht family reestablished themselves and built a new life in America. Yechiel got married, had five children, 26 grandchildren and an ever-growing number of great-grandchildren. He never forgot his experiences in the war and, until the day he died, he held a great appreciation for a basic piece of bread and a simple potato which graced his table at every meal so he could say a blessing on the very items that spared his life in the frozen tundra of Siberia.

This post was written as part of Gesher L’Europa, the NLI’s initiative to connect with Europe and make our collections available to diverse audiences in Europe and beyond. If you liked this article, try these: How Bergen-Belsen Survivors Celebrated Independence These Currency Bills Were Used in the Theresienstadt Ghetto When Buchenwald Was Liberated: A First Glimpse of the Holocaust