Samuil, the second of the brothers Polyakov, lived an interesting life, balancing his identity as a Jew with his position in the Russian business elite. 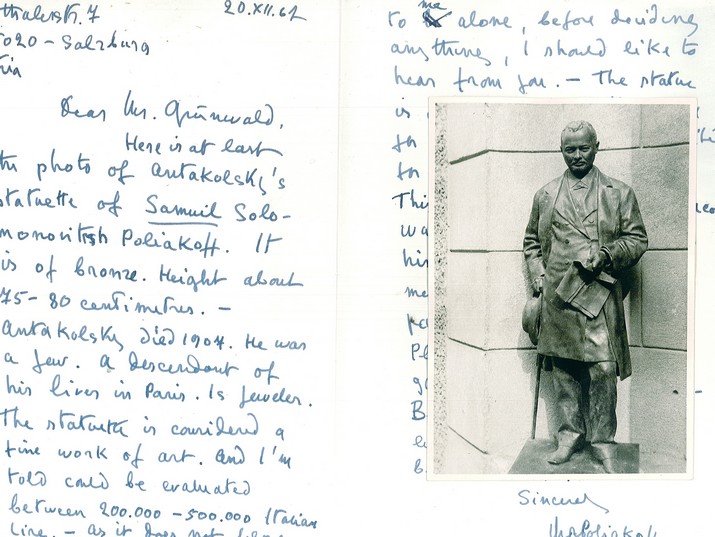 Letter from Mary Poliakov to Kurt Grunwald, 20 December 1967, with a photograph of the statue of Samuil Poliakov (CAHJP, P77-22.2).

Samuil Polyakov and his brothers, Yakov and Lazar, were anomalies in mid-19th-century Russia. Samuil was the second of three brothers who were part of a Jewish banking family of Russian nobility in the mid to late 19th century. His older brother, Yakov Polyakov, was one of Russia’s greatest Jewish tycoons who built up the railroads across the country. Yakov kept a detailed diary of his thoughts, business dealings, and activities that are now preserved in the Central Archives for the History of the Jewish People. His diary gave us much insight into his world but uncovering the thoughts and actions of his younger brother Samuil took a bit more work.

Kurt Grunwald, a native of Vienna who moved to Ramban Street in Jerusalem, wrote a vivid biography of Baron Maurice de Hirsch, one of the biggest Jewish philanthropists, whose business model was just like that of the Poliakov brothers in that he combined banking with obtaining concessions for railway construction. Baron Maurice de Hirsch most famously sealed the deal for building the railway connecting Vienna and Istanbul, and despite the fact that this vision was only partially realized because of the shaky political situation, it nevertheless became the major railway in the Balkans and for many years hosted the famous Orient Express.

Grunwald’s research naturally led him to the Polyakov family. As it turns out, these two families were in fact related as the brother of Maurice de Hirsch, James (Jakob) de Hirsch de Gereuth married the daughter of Samuil Polyakov, Zinaida. In the 1960s, Grunwald got in touch with the descendants of the Poliakov family who were scattered across post-war Europe. Mary Polyakov, a granddaughter of Yakov Poliakov, was a fiction writer who spent time living in Switzerland, Austria, and Italy. Mary provided Grunwald with some insight into her family:

“I know that Jacob and Samuil lived in St. Petersburg. Each had a palace. The first entertained politicians, diplomats and such like. Samuil’s house was open to artists and writers. There must be somewhere a bronze statue of his, the work of the known sculptor Antokolsky, a fine work.”

The palaces of the brothers Polyakov were situated on Galernaya street near the Hermitage, which is still one of the most luxurious in the city. At the end of the 19th century, multiple buildings on Galernaya street belonged to the two most prominent clans of Jewish bankers and entrepreneurs – the Polyakovs and their neighbors the Günzburgs, the most famous Russian Jewish family of the time. Several banks were also located nearby.

Historian Ben-Zion Katz collected information about Samuil Polyakov and Horace Günzburg from persons who knew them and presented it in his memoirs. He writes that Samuil was religious and prayed with his tallit and tefillin every day, but did so in secrecy. Samuil also kept a kosher kitchen though he was insistent that his non-Jewish guests not know that he kept his food kosher. Horace Günzburg’s guests, including the Russian royal family members, knew they would receive only kosher food in his home. Count Shuvalov, a Russian noble who often dined at Günzburg’s, used to eat cheese for dessert after dinner, like most of the Russian nobility who had adopted French culture. Günzburg’s maids would promptly clear the table and replace meat dishware with a dairy set.

Not a Jewish Philanthropist?

Samuil was actively criticized among his Jewish compatriots as his philanthropy was geared only toward Russian organizations and never toward the Jewish organizations. Samuil’s reasoning, it seems, was the wish to assimilate, to be favored at court, and to gain a much desired noble title. Henrich Sliosberg, a famous Jewish lawyer, said the following:

“He avoided the Jews of St. Petersburg, stayed somehow apart from them, but very cordially accepted all sorts of dignitaries, princes, counts, who sought his favor for their material interests. They kneeled before him, they considered him a business genius, but I never heard any of the high-ranking officials who knew him closely say that Polyakov was loved and that even those whom he had helped were attached to him. His business reputation did not have any beneficial results for the Jews; it irritated people more than it appealed to them.”

Samuil donated large sums of money toward education and to many provincial theatres and museums. Paradoxically, Samuil also happened to make a certain accidental contribution to the Russian revolutionary movement which was, of course, absolutely against his wishes. This is how it happened.

Samuil donated 200 thousand rubles to the construction of the student dormitories of Saint Petersburg University. The administration decided to host a celebratory assembly and present Polyakov with a letter of thanks for his donation. While we don’t know exactly what was written in this letter, many of the students who were asked to sign the address found the tone of the text too servile. When the administration refused to change the text, the students decided to object to the ceremony since the letter was composed as if coming from the entire student body. The students called a meeting in the university lobby and staged a protest.

The whole situation could have been resolved easily and quietly, but the administration decided to bring the police and the mayor to the building where the protest was being held. Several students were arrested and, in the end, about one hundred students were expelled from the university. This incident provoked additional student demonstrations in other cities. Among the students who took part in the initial ‘uprising’ in Saint Petersburg was Sergey Nikonov, a future revolutionary, who later took part in the preparation of the assassination attempt on Tsar Alexander III. In his memoirs he writes:

“I can say for myself that the “Polyakov Story”, which played out before my eyes and with my modest participation and was essentially insignificant, completely determined my position in relation to the autocracy and its organs — administrations, police etc. From now on, I could only be an ardent opponent to this system, and for me the question was brought up to how I can be more productive in the fight against it.”

Crafts versus Agriculture and the Rabbis’ Conference at Polyakov’s Palace

Samuil’s policy of philanthropy started to change in the 1880s: he began taking interest in Jewish initiatives and became the major promoter of the establishment of ORT: Obschestvo Remeslennogo Truda, ‘Association for the Promotion of Crafts.’ The change in his philanthropic perspective came due to the strong influence of Professor Nikolay Bakst, a physiologist, writer, and Jewish activist. Bakst strongly believed that the condition of Russian Jewry could be drastically improved by developing their skills in various crafts, enabling Jews to find work as artisans. This view contradicted the view of Horace Günzburg who invested, like Maurice de Hirsch, in putting Jews to work in agriculture.

Bakst and Polyakov both believed that, in order to improve the lives of the Jews, they should be taught secular disciplines. Willing to help this cause, Polyakov got involved in the fate of the most famous Jewish religious school of the time – the Volozhin Yeshiva. Russian authorities tried to enforce the teaching of the Russian language and arithmetic in the yeshiva, but the head of the institution, Rabbi Naftali Zvi Yehuda Berlin, thought that his yeshiva was not the place for these subjects and there was a serious risk that the yeshiva would be closed due to his stubbornness.

Albert Harkavy, a former student of Berlin’s, went on to become a librarian at the Imperial Library and a renowned scholar in Saint Petersburg. Berlin traveled to see him and Harkavy introduced Berlin to Polyakov and Günzburg who interceded for him with the famous liberal Count Pahlen, who was privy to the secret affairs of the ministries. The Count managed to arrange a license to open a yeshiva that would only teach religious subjects without having to teach the national language.

The question of secular studies came up again in 1887. On the initiative of Bakst, the Congress of the most prominent rabbis in Russia was convened. The Congress met in Saint Petersburg in Samuil Polyakov’s house, and, after a long and stormy debate, the attendees drew up a protocol that established that yeshiva pupils in Volozhin would learn Russian and arithmetic, but that these subjects would not be taught in the hall of the yeshiva, but rather in a separate room.

Unfortunately, this outstanding event and document did not prevent the closure of the yeshiva which happened soon afterward, but for reasons unrelated to the teaching of new secular disciplines.

Samuil Polyakov had a close friend named Abram Moiseevich Varshavsky who was also in the railway business. His son married Rozalia Polyakov, Samuil’s daughter. Varshavsky was famous for his kindness and he was known to help everyone who turned to him. Perhaps this generosity is what led to his financial difficulties. Unable to face the humiliation of declaring bankruptcy, Varshavsky committed suicide. Samuil Polyakov died of a heart attack at his friend’s funeral.

Here is how his brother Yakov describes that sad day:

“On April 7, my brother, his wife and I went in his Landau [automobile] to Varshavsky’s funeral (how many times did his wife and I plead with him not to go to the funeral, It led to nothing). The three of us left Varshavsky apartment following his coffin and immediately at half past ten in the morning my poor dear brother fell and died of heart failure. He fell near me on the street next to the apartment of Varshavsky and only thanks to the urgent orders of Mayor Gresser my unfortunate brother was lifted and brought into a shop near this apartment. Otherwise, he would have been trampled over for there were several thousand people attending the funeral of Varshavsky, and when they found out about what had happened to my brother they all rushed to this place and only Gresser was able to stop this crowd. I cannot give any other details about our great misfortune.”

“Along the route of the funeral procession, a countles multitiude gathered. All balconies, windows and even some of the rooftops along Nevsky Prospect were littered with the curious. Behind the coffin, marched crowd of several thousands of Jewish artisans, who arrived to pay their respects to the founder of the ‘Jewish craft fund.'”

Special thanks to Moshe Goncharok from the Central Zionist Archives and to my grandmother Ksenia Guzeeva.    If you liked this article, try these: The Brothers Polyakov: From the Shtetls of Poland to Russian Nobility How Lenin’s Great-Grandfather, a Convert, Informed on the Jews The Cooking Accident that Destroyed a Jewish Greek Community