A Matter of Faith: Ferrara Manuscript Outlines Orthodoxy and Heresy Between Jewish and Christian Traditions 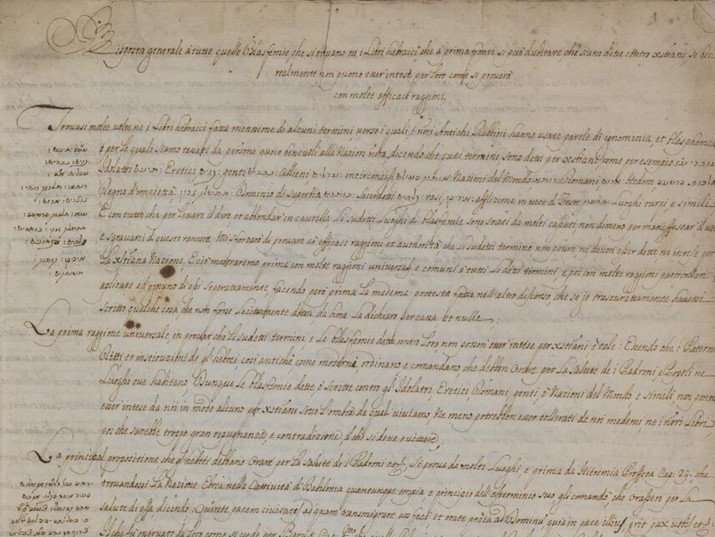 The Italian manuscript A General Response to the Desecration of Sanctity in the Hebrew Books (henceforth Response), now kept by the National Library of Israel, provides an important example of Catholic book censorship in the modern age. Written by an anonymous Jewish author in Ferrara during the seventeenth century, this document focuses on religious disputes concerning the accusation of blasphemy made by the censors of the Roman Inquisition against rabbinical literature.

The accusations made against Hebrew texts refer especially to Talmudic works whose reading could lead to negative interpretations of Christianity.

In order to effectively forbid these texts, Catholic censors needed to control any source of Jewish culture which could be spread easily among Christians. The printing of books and documents in the modern age revealed itself to be an excellent means of canonization. The main problem concerning Hebrew texts in the modern era was related to their availability as they were often limited to Jewish communities. The view held by the Catholic Church regarding Jews and Judaism was strongly conditioned by the polemic work “Pugio Fidei,” or, in English, “Dagger of Faith,” written by the Dominican friar Ramon Martí. It’s possible to identify two interpretative lines about Judaism in this document: the first interpretation is founded on the idea that holy Jewish books are full of useful evidence of religious truths, thanks to the many resemblances with Christianity, while the second traces a negative connotation of Hebrew texts, with emphasis on the Talmud. The negative inclination in the Pugio reclaims the traditional thesis on the vanity of Talmudic literature, that is seen as a blasphemous attack on Christians. The success of the negative narrative posed about Judaism led to the censorship of Jewish texts.

Since the above-mentioned manuscript is a “general response” to the Roman Inquisition, let us now examine its structure in order to better understand its content.

General Analysis of the General Response: A Philosophical and Philological Profile

One interesting aspect worthy of consideration in the manuscript is the use of philosophical reasoning to argue the theory that Hebrew texts do not contain negative remarks about Christianity. In order to support this thesis, the anonymous author of the code presents eight “universal reasons” that would demonstrate the unfoundedness of the accusations against rabbinic literature.

The first universal reason explained by the author focuses on the importance of prayer in Jewish tradition, whose history is proved through important textual references from Flavius Josephus or from Philo of Alexandria, who describes the devotion of Jewish prayer in his “De Legazione ad Caium Imperatorem”. These references serve as fundamental proof of the benevolence Jews had towards other nations and their leaders, even during and after the destruction of Jerusalem, as Josephus’ Bellum Iudaicum shows. Words like “idolaters” and “heretics” begin to appear in the first two pages of the manuscript to exhort the readers to understand that such terms refer to Babylonians and Romans, who are seen as idolatrous pagans. Hence, definitions such these can’t and mustn’t be seen as reffering to Christians, according to the author.

The second universal reason is founded on a syllogism. It states that all people who follow the seven laws of Noah will partially enjoy Heaven. As Christians follow the seven laws of Noah, they, according to Jewish beliefs, will partially enjoy Heaven. The consequence of this reasoning confirms again that Christians cannot be percieved as idolaters or heretics by Jews, also because they share a common concept of blasphemy. In fact, in both Christian and Jewish holy texts it is forbidden to be involved in actions that offend God, including idolatry, homicide, adultery or theft.

It’s also clear that, although Christians share some religious beliefs with Jews, they don’t necessarily observe all the same rules. For example, the precepts regarding the eating of meat from a slaughtered animal aren’t part of Christian orthodoxy, but yet Christians still are till given the opportunity to achieve  “eternal happiness”. This is possible because they are seen as “good and pious.” The author focuses his attention on the meaning of the expression “good and pious”, and dedicated his third  in argument to this point. Since Christians believe that the seven laws of Noah came from God, the requisite of being “good and pious” is fulfilled. In addition, it is not necessary to follow all the seven laws given to Noah as long as one of them is observed with “good intention.” Moreover, the author explains a passage from the ninth psalm of David, recalling that these verses describe the fate of those who are not “good and pious,” pointing out that the expression “all people who leave God”  (Obliviscuntur literally means “they forget” and can be interpreted as “ they leave” in a figurative sense) is meant for those who are neither good nor pious, seeing as they deny the glory of God.

For what concerns the goodness of Christians, in the manuscript it is written that the Ten Commandments they follow are thought to have come from God and this proves a convergence between Jewish and Christian beliefs: the Ten Commandments given to Moses include many precepts shared with Judaism and given the fact that Christians follow many precepts of Mosaic Law with good intentions , consequently they can’t be described as heretics or idolaters.

In the Response, the theme of religious observance is often reiterated through references to Don Isaac Abarbanel, a philosopher, statesman and biblical commentator, King David (in his fourteenth psalm), or the prophet Isaiah, whose verses are mentioned to affirm the need to follow even just one precept to avoid damnation. Proceeding in the analysis of the manuscript, the author explains that the rabbinic doctrine on intention in religious observance is surely influenced by the moral philosophy of Aristotle. His theory of purpose is founded on the notion of prudence, as explained in the sixth book of Nicomachean Ethics, where it is written that each moral virtue depends on prudence, defined as the “common form of virtues.”

The anonymous author presents a fourth universal reason, maintaining that there are three aspects to be considered for a correct evaluation of rabbinical texts including when these books were written, who wrote them, and for whom. Following this argument, words like “idolaters” or “heretics” are to be intended for those people living when “ancient rabbis” instituted their doctrines, and without any doubt, in that historical period, Christianity wasn’t yet established. In particular, Babylonian and Roman ceremonies are seen by the ancient Jewish sages as examples of idolatry and blasphemy. In addition, a certain passage from Saint Augustine (De Civitate Dei, 23) is mentioned, which describes both the Babylonian captivity of the Jews and the destruction of the 2nd temple of Jerusalem under the Roman Empire. The first event happened before the emergence of Christianity, while the second was the result of an expansionist policy led by the Roman Empire when Christians communities were persecuted as well.

The author also states that most of the content reffering to rabbinical texts is unclear, containing many ambiguous terms and figures that are easily misunderstandable, and for this reason they are percieved as offensive by Christians, even if they not addressed to them. Additionally, the author describes Christianity as a religion which is very close to Judaism, since it shares many common beliefs. He even argues that Judaim holds a benevolent attitude towards Christianity. The word “idolaters” therefore appears to be associated with “gentiles.” The term “goyim” refers to a non-Jewish nation and in the manuscript, this definition is used in reference to the Babylonians people. The author’s fifth argument make the case that none of these words refer to Christians, since Christians were called “Nazarenes”, and this epithet is significant since it distinguishes “orthodox” Christians from Arian Christians, who are mentioned as heretics in the manuscript/

This point is strictly related to the sixth argument brought forth by the author, in which he writes that the above-mentioned terms are so generic that they can easily refer to other nations or groups of non-Christian people:  these words even can be associated to communities inside Judaism.

Given the fact that the above-mentioned epithets are ambiguous, it cannot be concluded that they are addressed to someone in particular, as illustrated by the seventh argument; furthermore, blasphemy is assumed to be founded on a malicious intent, therefore something that is never verified cannot be presumed without evidence, in accordance with the eighth argument.

After the presentation of all the eight “universal reasons,”  the last page of the manuscript seems incomplete;  nevertheless, it makes sense to affirm that the anonymous author of this code managed to discuss all the eight points of his reasoning with historical, theological, philological and philosophical references that together contribute to a better perspective on the relationship between Jewish and Christian traditions.