Records from 18th century Prague show that the opening of Jewish coffee houses on Shabbat enjoyed the approval of the city’s rabbinic leadership. 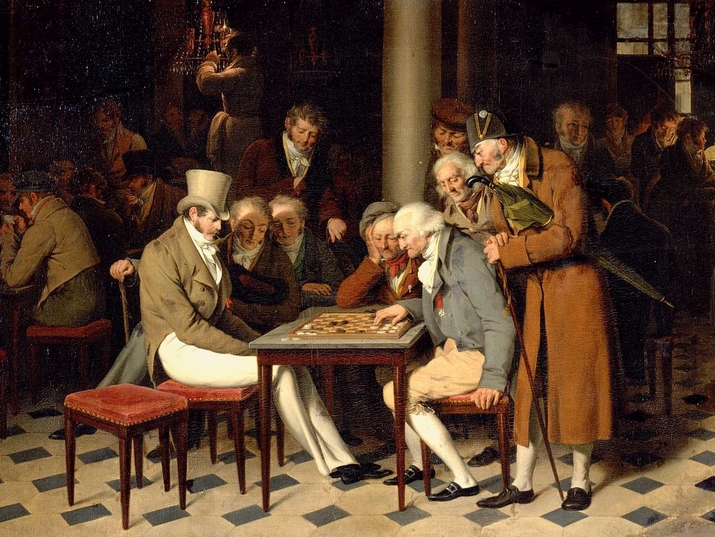 A Game of Draughts at Cafe Lamblin by Louis Leopold Boilly

In the middle of the eighteenth century, religious life in the Jewish community of Prague was at its high point, with nine well-known synagogues and dozens of study houses. But at the same time that the learned men of Prague were producing vast Torah scholarship and the yeshivas were bustling with students, another institution was gaining popularity – the coffee house. Coffee houses became popular soon after coffee’s arrival in Western Europe, and often offered more than just a drink; they were a place to spend leisure time playing games and discussing current events with friends and strangers. Rabbinic sermons and writings from this period warn of the spiritual threat posed by the coffee house.  These establishments’ diverse environment and leisure culture competed with the traditional Jewish lifestyle of worship and study.

In spite of this potential culture clash, the records from that time period in the Pinkas Beit Din – the minute book of the rabbinic court of Prague – show that the opening of Jewish coffee houses on weekdays and, shockingly to modern ears, even on Shabbat, enjoyed the approval of the city’s rabbinic leadership, along with careful, detailed rabbinic-halachic regulation.

The Pinkas (minute book) of the Rabbinic Court of the Holy Congregation of Prague, currently preserved in the Jewish Museum of Prague, is a hand written book which, records the decisions of the rabbinic court, one of the most important governing bodies of the Prague Jewish community. This pinkas, written in a mix of Hebrew and Yiddish, begins in 1755 and survived the Holocaust even as the community it records was wiped out, provides important testimony to Jewish daily life in Europe.

In the Prague Pinkas Beit Din, the numbers alone – seven discussions about coffee houses within fifteen years – tell us how pressing and how complex this issue was. The entries show a swift progression, from disapproval and severe limitations to support with minimal caveats. Evidently community members had embraced coffee-house culture and were not about to give it up. The pinkas entries also show the style of religious leadership adopted by the rabbinic courts of Prague in this case: instead of opposing a cultural trend that threatened traditional life, the rabbis accepted the new trend, which gave them the opportunity to regulate and contain its impact, and to integrate the new institution into the traditional mode of Jewish life.

One of the first discussions in the pinkas, from around 1757, begins by taking a hard line – Ideally the coffee houses in the Jewish ghetto should be closed, and people should instead dedicate their time to Torah study. Since that is impossible, they should open only for an hour in the morning, after morning services at synagogue, and then for an hour following afternoon services. Women should never enter coffee houses. With regard to Shabbat, “no man should dare to go to the coffee house and drink coffee there on the holy Sabbath. This is punishable with a large fine!”

This discussion is followed by another paragraph, presumably added days or weeks later:

However, due to the travails of war (presumably the siege of Prague in the spring of 1757, part of the Seven Years War) and other concerns, many have protested that we cannot be so stringent on this matter… the way to distance from sin will be that on the holy Sabbath, no one should go to the coffee houses to drink coffee, but anyone who wishes to drink should bring it to his home. And on weekdays, any time they are praying in the Old New Synagogue (Altneuschul), no man should dare go drink in the coffee house.

The added paragraph shifts the balance significantly, permitting Jews to frequent coffee houses at all times except during prayers; allowances are made for procuring coffee on Shabbat as well. Apparently the Jewish coffee sellers had an arrangement in which customers paid before or after Shabbat, and they could prepare the coffee without violating Shabbat laws about cooking, perhaps with the help of non-Jewish workers. The main concern is the propriety of spending time in the coffee house on Shabbat, so getting the coffee as takeout is a suitable compromise, but not one that lasted long.

From this day onwards, on Shabbat and holidays, women are not to enter coffee houses to drink coffee at all. And even on weekdays, from 6 PM onwards, no woman or women should be found in the coffee house…

These entries assume that, despite earlier restrictions, women are indeed entering coffee houses. Moreover, coffee houses are not only providing coffee for takeout on Shabbat, customers are sitting and drinking coffee there, and the rabbinic court is only trying to limit that clientele to men.

The owners of the coffee houses stood before the rabbi and the rabbinic court, who warned them that they should be careful to avoid selling coffee on Shabbat and holidays to non-Jews, as the prohibition of commerce on the Sabbath applies. They are permitted to sell only to Jews, for the sake of Oneg Shabbat, delighting in the Sabbath day, since not everyone is able to prepare coffee for himself on Shabbat at home.

To the rabbis of eighteenth century Prague, the coffee house’s ambiance of levity and cultural exchange competed with the traditional understanding of the proper Shabbat atmosphere. The rabbinic court therefore made efforts to restrict Jewish coffee houses’ activity on Shabbat, with limited success. But in their final entry on this topic, the Prague Beit Din provided the coffee houses with a religious stamp of approval, pointing out that Jews attending coffee houses on Shabbat was in fact a fulfillment of the religious injunction to delight in the Sabbath day. The rising cultural significance of coffee in European regions, since its import a few decades ago, is now reflected in the the pinkas; the new product is incorporated into halachic language, labeled, for the first time, as “Oneg Shabbat” – a positive value which should be carefully considered.  The coffee house and the synagogue need not always be rivals: within certain parameters, both could be part of a meaningful and enjoyable Sabbath day in Prague.

The National Library of Israel, together with the Central Archives for the History of the Jewish People in Jerusalem, holds the largest collection of pinkasim in the world. Through international academic co-operation, the Pinkasim Collection aims at locating, cataloguing, and digitizing all surviving record books, making them freely available. At the first stage of the project, the focus is on pinkasei kahal, the pinkasim of the central governing body of Jewish communities. On June 20th, the National Library will host an event marking the launch of the Pinkasim Collection, which will feature experts from around the world, and will include a lecture by Maoz Kahana about coffee houses in Prague.

You can read more on this subject in the article by Dr. Maoz Kahana, ‘The Shabbes Coffeehouse – on the emergence of the Jewish Coffeehouse in eighteenth-century Prague’, Zion 78,1 (2013), pp. 5-50 , which you can find here.