Life Under Fire: The Doctor Who Photographed the Destruction of World War I

Home > Germany the Jews and Israel > Life Under Fire: The Doctor Who Photographed the Destruction of World War I
Diaspora

Felix A. Theilhaber served as a doctor during the Great War and took photos of the damage and destruction caused by the German bombings. 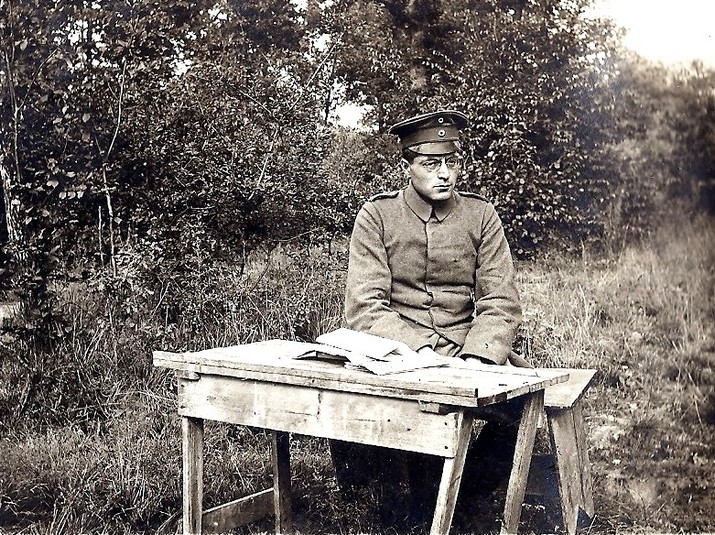 The outbreak of World War I in August of 1914 brought with it the drafting of hundreds of thousands of young men for service in the German army. The draft called up any young man who qualified, including the Jewish citizens of Germany, a majority of whom assumed their military duties with the same excitement as the rest of the population. Jewish physicians of the appropriate age were also drafted for service in the medical corps. They worked as military doctors in the many hospitals that were established to keep up with the ever-growing number of wounded soldiers who required care and treatment following the difficult battles of the Great War.

Felix A. Theilhaber (1887-1956) was a young Jewish doctor who had studied medicine in Berlin and Munich. As a student Theilhaber began taking an interest in Zionism and even considered the possibility of emigrating to the Land of Israel. However, the outbreak of the war prevented him from doing so. Instead, he answered the call to duty and served his country as a physician in a number of military hospitals. Felix was stationed mainly in Poland, but it appears he also served on the Western Front in Belgium. Prior to his service in the German military, he had served in a similar role in the Turkish Army in the Balkans.

During World War I, Felix experienced the full brutal intensity of all-out war. This was a result of the sheer number of injured soldiers who came under his care, though an additional aspect of the cruelties of war became apparent to him through the proliferation of anti-Semitic accusations within the German Army. Driven by his deep conviction that Jews were equal citizens of Germany, Theilhaber wrote a book about the experiences of Jewish combat pilots in the newly-formed German Air Force.

Theilhaber thought that the contribution of Jews to such an elite unit would provide a convincing argument as to the devotion of Jewish fighters to Germany. In his effort to collect data, Theilhaber sought out pilots and fighters who had manned warplanes during the years 1914-1918. The pilots corresponded with Felix through letters in which they wrote about their experiences at war, including photographs to illustrate their stories. One letter was sent by Fritz Beckhardt, who was not only an outstanding combat pilot but had also been awarded the German Army’s highest honor, the House Order of Hohenzollern. Coincidentally, Beckhardt had served in the same squadron as Hermann Goering who went on to become a leading Nazi and Commander of the Luftwaffe during World War II. The squadron insignia was the swastika, and Beckhardt’s plane was decorated with this symbol. This photograph appears on the cover of Felix Theilhaber’s book about Jewish fighter pilots which was published in two editions during the 1920s.

As a personal reminder of the war days, Theilhaber collected photographs, some of which he may have even taken himself. These pictures document daily life at the military hospitals where he worked, but Felix also selected landscapes from the Eastern Front in Poland and Russia, and from the Western Front in Belgium. The pictures from the city of Leuven document the great destruction caused by the German artillery bombardments which were later condemned by many international agencies as disproportional use of force against a country that had declared neutrality.

This album of selected photographs had been in the possession of Felix Theilhaber’s son, Mr. Adin Theilhaber-Talbar, who donated his father’s estate to the National Library in 2013-2014, a number of months before he passed away.

Felix Theilhaber also authored medical textbooks and demographic studies. His research focused on Germany’s Jewish population and even anticipated its demise due to the low birth rate, intermarriage, and assimilation. The solution that Theilhaber espoused was the establishment of a Jewish State.

Like many others, Felix did not emigrate to the Land of Israel until 1935 after losing his medical license in Germany due to his Jewish heritage. After arriving in the Land of Israel, Theilhaber, along with other doctors of German origin, established the Maccabi Sick Fund (which to this day is one of Israel’s largest HMOs) and promoted awareness regarding the importance of physical activity.