Advertisement for Purchase of War Bonds, 1918

Home > Germany the Jews and Israel > Advertisement for Purchase of War Bonds, 1918
Diaspora

Almost all of the large countries involved in the war appealed to their citizens to help achieve victory by donating their private money through the purchase of the bonds. 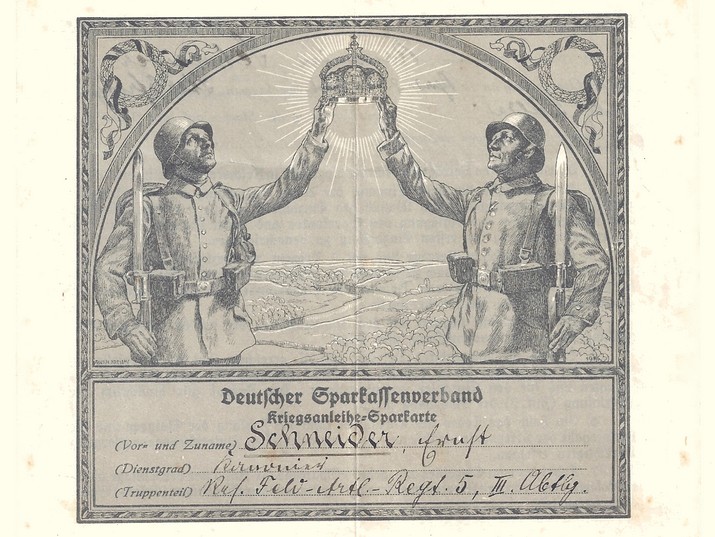 Every war requires tremendous resources. Vast funds are needed to finance the weapons and military equipment, soldiers’ salaries and food, and the various other costs that arise in wartime. Armed conflicts alter the economies of all the nations involved: in order to prepare the national economy for this exceptional situation, the state needs money from loans and bonds, including funds for the purpose of changing the profile of the national economy for the benefit of the war objectives.

In the history of the 20th century, governments were always full of hope that they would be victorious, and thereby be able to return the debts at the end of the war. Defeated countries were expected to pay reparations to the victors, and the money would be allocated to covering the latter’s debts. However, there are losers in every war, and in the case of defeat, it was impossible to repay the banks and individuals who had purchased war bonds. To the contrary, in such a situation, it was necessary to borrow additional funds, i.e. to incur new debts in order to satisfy the demands of the winning side.

During periods of war, propaganda has always played a central role, both in maintaining unity on the home front, but also for garnering civilian support from soldiers on the battlefield. Needless to say, the eventuality of defeat did not come up in the public declarations, and naturally, not in the various materials printed in wartime: placards, pamphlets, etc. Public discussion of such a possibility posed the risk of interfering with civilians’ willingness to harness themselves to the war effort, for example, leading in turn to a drastic reduction in the purchase of war bonds. Therefore, advertisements for the purchase of war bonds usually played on the sentiments of the civilians and their fears of the cruel enemy. Fear is a known sales pitch during war.

World War I was the heyday of war bonds and associated advertisements. Almost all of the large countries involved in the war appealed to their citizens to help achieve victory by donating their private money through the purchase of the bonds.

The German Empire issued war bonds nine different times, in order to fund the tremendous war expenses. Selling these bonds yielded almost 100 billion marks for the war treasury of the German army – some 85 percent of the overall cost.

Approximately every half year during the war, the German government launched a new campaign to raise money from the public. The last was in September 1918, just two months prior to the end of the fighting. The interest rate was set at 5% (more than in ordinary savings plans). It was possible to trade in war bonds, which in principle had a chance of high yield in the event of a German military victory.

However, history took its own course, and Germany was vanquished in 1918. This is how the terrible economic catastrophe occurred: the state was incapable of paying its debts. Moreover, it was forced to commit to paying enormous reparations to the Allied Powers through the Treaty of Versailles agreements. In addition, following the explosive hyperinflation from 1922 to the end of 1923, all of the bonds lost their value. The result was that the state was released of its obligation to its citizens, while the latter irreversibly lost their private capital, which they had invested to finance the German army. This development caused despair among the citizens of Germany, who had been educated to place their belief in the authorities. The authorities, however, had collapsed, leading to defeat in war, and ultimately, an unfathomably large-scale dissolution of private capital. 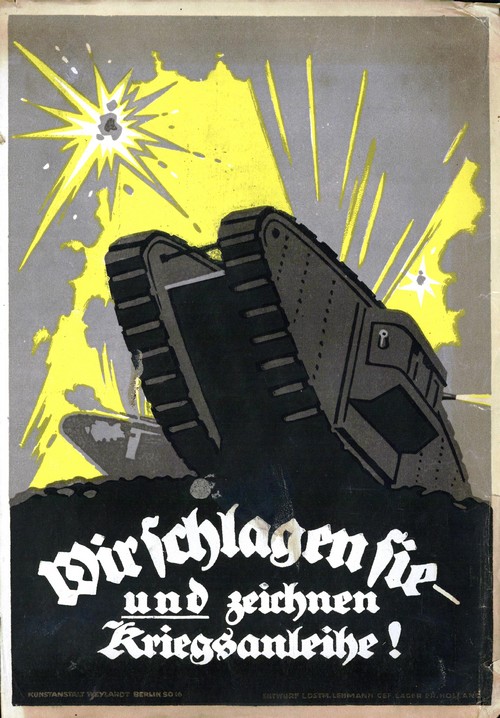 The placard displayed here was published apparently in 1918, but to date, we do not know with certainty if it was released together with the eighth or ninth (and last) issue. The central motif was the threat to Germany and its forces posed by a new type of weaponry: the British tank. The Mark I tank model entered into intensive use during the last year of the war, and confounded both the German High Command and the soldiers in the trenches. The placard presented here belongs to the collection of Arthur Czellitzer, a Berlin ophthalmologist who collected placards and political and propaganda fliers in Berlin for a period of ten years. Dr. Czellitzer deposited the collection in the Jerusalem library in 1936. Czellitzer met a bitter end: he was murdered in the Holocaust in 1943.