In the Avigdor School magazine, dreams of becoming a princess stand alongside memories of starvation. The magazine offered an outlet for the memories of Jewish children after World War Two. 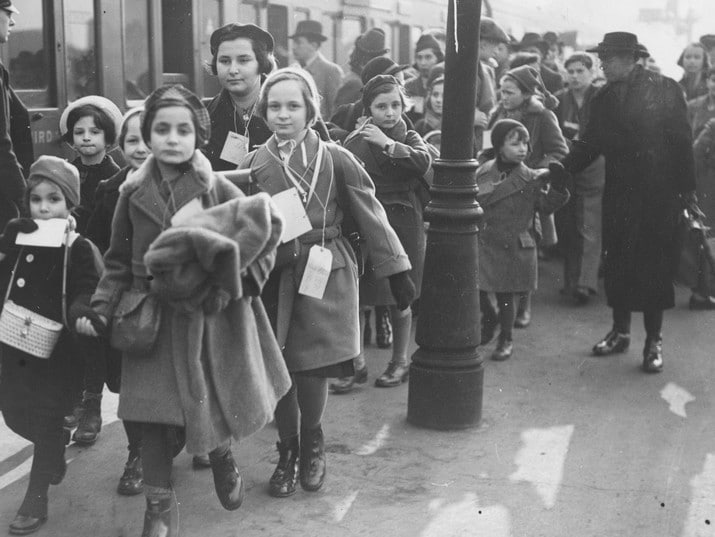 When the Nazis came to power in 1933, the need for Jews to flee from Europe became increasingly urgent. Following the violence and destruction of Kristallnacht in 1938, the extent of the threat to the Jewish people became even more clear.

A group of Jewish community leaders in the UK approached the British government with a plea to help the Jews of Europe. Among them were Rabbi Solomon Schonfeld, a community leader and one of the unsung heroes of that dark time, who saved countless lives before, during, and after the Holocaust, at great risk of losing his own.

After the approval of the Kindertransport by the British government, thousands of refugee children were quickly removed from danger and put on trains bound for England. The Jewish children were taken in by volunteer foster homes across the country. Jewish, Orthodox children found themselves suddenly living in non-orthodox or non-Jewish homes, their own culture and heritage slowly fading into distant memory.

Concerned for the heritage of these children, Rabbi Schonfeld took it upon himself to find alternative housing options for the orthodox children where their religious practices and traditions would be followed.

As London prepared for war, children were sent from the city to the countryside to ensure their safety. Rabbi Schonfeld sent many of the Orthodox Kindertransport children to the Jewish Secondary School (JSS), which had moved to Shefford after the start of the war, to provide them a safe haven where they would be surrounded by Jewish life, culture and studies.

After the war, the children and the Jewish school moved to London where the JSS was renamed the Avigdor School. It was at this time, in 1946, that Rabbi Schonfeld began helping child survivors in displaced persons camps in Europe. The Avigdor School became home to these children who had survived the horrors of the Nazis and needed a place to start over and begin to heal.

Already home to British children and the German refugee children, the addition of the Polish refugees created an entirely new dynamic at the school. Frieda Stolzberg, one of the children who escaped on the Kindertransport and later met Rabbi Schonfeld, described the experience of the melting pot that was the Avigdor School after the arrival of the refugee children in her memoirs, “Throw Your Feet Over Your Shoulder”:

“We old-timers referred to the newcomers as ‘the Polish children.’ Some of them were wild and unmanageable because of their wartime experiences. Many of them suffered from nightmares and were often found sleepwalking,” she described.

“Our feelings towards the Polish children were somewhat ambivalent. On the one hand, we regarded ourselves as British by now and felt superior to these foreigners who spoke an ugly, guttural language. Their arrival upset the equilibrium and routine of our lives causing tensions and resentment.”

The staff and administrators struggled to find a way to contend with the trauma that came to the school with the child survivors. They decided that, as a method of healing, the children would be allowed to express and share their experiences and their stories, to let out the pain they were experiencing, in an attempt to begin to heal. The children would not be stifled- rather encouraged to remember, to write, and to tell their story.

The Avigdor school magazine became a space for students to express themselves and share their experiences. The issue prepared ahead of the Jewish New Year in September 1947 shows the dichotomy and contrast of experiences between the different groups of children living and studying together following the Holocaust.

In the section of the magazine dedicated to original articles and poems written by students, a poem written by a young girl who dreamed of being a princess, feasting with her valiant prince stands alongside articles by survivors of the war writing of their fears and experiences. Another article written by Frieda Stolzberg related the great successes of the Avigdor teams at sports day: “Well done Avigdor! The shield is ours again this year”. Just a few pages after it, we find a testimony written by an author identified only as G.S.:

“We could not stay any longer in Italy because it was very dangerous for us, now that the Germans had overrun the country and would take us to concentration camps….Now we are in England but I think I shall never forget our troubles which we had to bear for nearly 8 years.”

The stories of the horror faced by these children came to life in their writing. In a piece entitled, “The Jewish Tragedy,” another student wrote of the experience of being transferred to the camps in a cattle car.

“I shall never forget the scene, when one early morning, German offices came to us, into the Ghetto. We were ordered to pack a parcel…Ten minutes later we were taken to the station and put into a cattle-wagon in which there were already 95 persons… Three days and three nights we could not sleep even standing; children were crying all day long; they cried for thirst, hunger, sleeplessness and wariness until we reached our destination, Auschwitz, many people died.”

On the opposite page of a poem penned by a girl named Edith on her love for the glorious season of winter, where snowballs and sledding are a source of joyful cheer, an unknown author shared a painful poem entitled, “The Death of a Rose,” in which a flourishing rose was ruthlessly plucked from a blooming bush and left for dead.

“When with quick step from that spot he hastened, The rose dropped to the ground unknown Where it lay quite crushed and broke, all its beauty gone.  Longing-longing for the rose bush where it had happily grown.

A wild thing destroyed by the hand of man, His fault that it now lay in this everlasting sleep From which it never again would wake on huge and dirty rubble heap.”

The seamless juxtaposition of these realities, from the excitement of a child ahead of the jolly days of winter to the crushing memories of another who had been stripped from their source of life, exhibits how the school magazine provided the children with an outlet – regardless of their history or experiences.

The magazine became a place for the child survivors to share their memories, their experiences, the horrors they faced and to, on some small level, begin to heal. The administrators at the Avigdor School worked to create a unique and open environment of solidarity and understanding that brought the children from the different corners of Europe together all working towards the same goal of recovery from loss, pain, and trauma following the worst tragedy ever faced by the Jews of Europe.

For more on the experiences of Frieda Stolzberg, read, “Throw Your Feet Over Your Shoulders- Beyond the Kindertransport, (2008)” by Frieda Stozbeg Korobkin.

This article was written with the assistance of Dr. Yoel Finkelman, curator of the Judaica Collection in the National Library of Israel.