The Value of The Individual – According to Mathias Aharon Friedmann.

Home > Romania > The Value of The Individual – According to Mathias Aharon Friedmann.
Diaspora

"The urge of the Individual to survive leads to the formation of the Collective Self that ultimately leads to the consolidation of the Morality of the Nation" writes Aharon Mathias Friedmann, descendant of a well-known Romanian Hasidic family of Bohush (Buhuși), in the culmination period of Jewish emancipation in Romania in 1916.

Since the middle of the 19th century, the cultural, religious and national activities of the Jews in Romania received an impulse gaining the support of many Romanians and even of the administration itself, although around the turn of the century the number of its enemies and opponents increased.

“Încotro?” The article “Whereto?” published in Romanian in the 22nd issue of the Journal Hatikvah in 1916.

Friedmann, the author of the article “Wherever?” is known to the scholars of the period as a young Romanian-Jewish publicist who lived only 25 years, but who, during his brief life, served as secretary of the Federation for Hebrew Language and Culture in Romania. To avoid harming his father’s (Abraham Joshua Heschel Friedmann – the Admor of Adjud) reputation, Friedmann wrote these educated, socialist and Zionist thoughts, using one of his pen names. In his article, the young publicist Friedmann explains where he thinks the Jewish Spirit should turn. The value of the Individual in the society is measured according to his contribution to the Community. The Individual is the fundament and the basic compound of which the Collective consists. Therefore, the integrity of the Individual must be preserved by giving him the possibility and the opportunity for free development with the purpose to serve the ultimate goal: the subsistence of the Collective, namely the hold of a Jewish Spirit as a Nation in the Jewish Homeland.

“Wohin?” (“Whereto?”). The first page of part III of the article in Yiddish. Friedmann’s original handwriting. It is possible that the translation into Romanian was done by the Journal Hatikvah’s editing staff.

Although he was dismissed by his family as having abandoned the education and Hasidic values in which he was educated, Friedman insisted on finding the right way to combine the values of Orthodox Judaism with secular studies and socialist views to which he was exposed as a young man. This is not surprising since Friedmann’s personal biography is well known. Although he was educated by the Hasidic movement, he chosed to identify with a reformist movement known as “Modern Orthodox Judaism.” In the way of the communities called “Status Quo Ante” in neighboring Transylvania, he sought an alternative way to Western Jewish reform against the Orthodox stream. These communities were characterized by the fact that they remained in a state of constant deliberation lacking a uniform religious character. It is very possible that because of this, Friedman gave the title “Where?” to his article. Where, in Latin translation is Quo, a word that reminds us of the “Status Quo Ante” communities. The author of the article suggests that members of these communities should focus on a common goal, which is the importance of the Individual within the Community as a solution and as a condition for the continuous existence of the Jewish Nation.

The original manuscript of the third chapter of the above-mentioned philosophical-theological essay of Friedmann, including a postcard written by him to the editor of Hatikvah, Leon Gold (Ariel Yehuda), were deposited at the National Library in Jerusalem in the early 50s and are a part of the Collection of Jewish Romanian Intellectuals’ Private Papers. 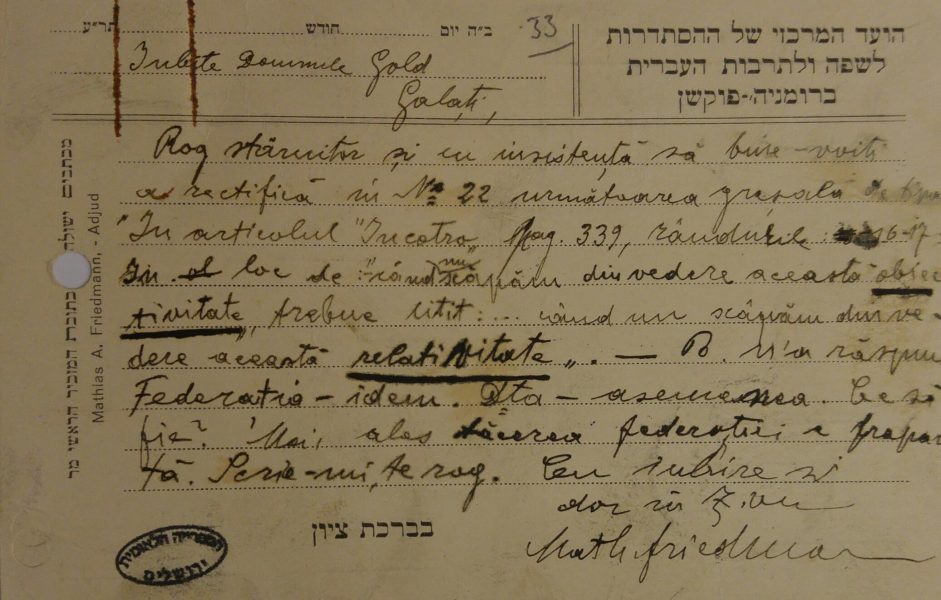 Postcard from May 1 sent from Friedmann to the Hatikvah’s editorial board with a request to correct retroactively a typographical error that occurred in Part B of his article. About Friedmann See also David Assaf’s book “Untold Tales of Chassidim“

This collection contains mostly correspondence, but also works by representatives of Jewish and non-Jewish culture, both poets and politicians. 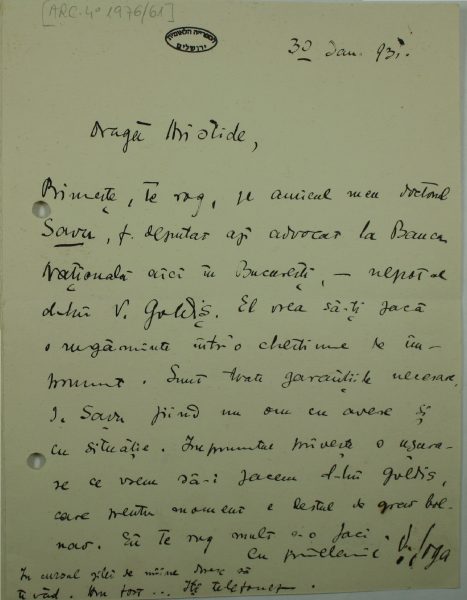 A letter dated January 30th, 1931, by the Romanian politician Octavian Goga to the Romanian Jewish banker Aristide Blanc in which Goga asks for assistance in the matter of a loan for his friend, the lawyer of the Romanian National Bank. Partially, Goga entered the stage of literary authors on the recommendation of Jewish writers. About eight years after the writing of this letter, Goga, with the help of the right-wing party, served for a year as Prime Minister of Romania. His government, apart from the closure of democratic newspapers, also enacted anti-Semitic laws, including a citizenship law whose function was to reexamine Jewish loyalty to the state.