Take a look at the incredible treasures from the archive of the Hungarian-Jewish Artist, Gyula Zilzer. 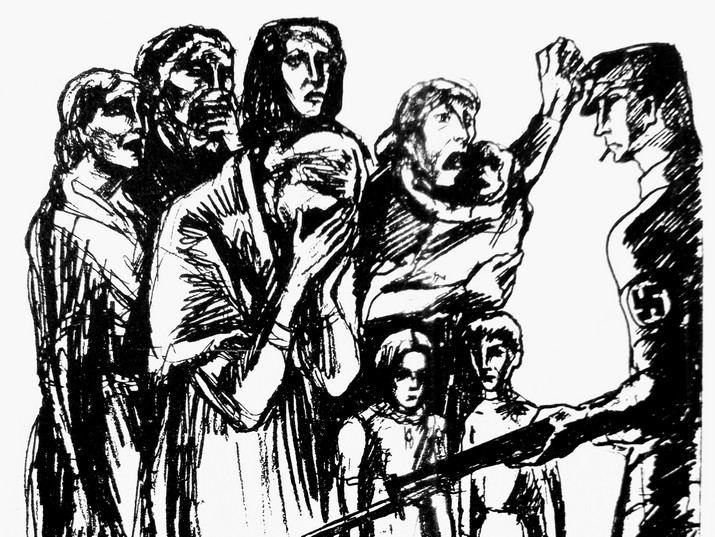 The materials in the archive of Hungarian-Jewish born artist Gyula Zilzer were bestowed to the Archives of National Library of Israel in 2002 as part of the estate of Mary Zilzer, the artist’s widow, after she passed away in 2001.

The story of the artist’s life can be traced back through the personal documents, photographs, correspondence, literary works, paintings and illustrations contained within the archive.

Most of the paintings in the archive are lithographs, which, unlike a painting, can exist in more than one original copy. Making duplicates with the lithographic method involves a lot of effort and all duplicates are made by the same artist, using the same stone on which the original image was painted.

Gyula Zilzer, a descendant of an artisan family, was born in 1898 in Budapest, Hungary. Members of this illustrious family include the Bavarian king’s court painter Antal Zilzer, the sculptor Hajnalka Zilzer, and the modern painter Frigyes Frank.

In his youth, Zilzer had a special interest in machines and spent time working on inventions.

In 1917, together with two of his friends, Trotzer and Mintz, he worked to create a radio controlled torpedo. During the Russian Revolution, the Russian Army gave the three young men access to a factory to build their torpedo model and to produce it for military purposes, but the project was never completed.

The model became a secret German patent and later served as the basis for several technological innovations, including the dial mechanism of telephones and missile control systems developed in other countries.

As a Jew, Zilzer was prevented from continuing his academic studies in mechanical engineering due to the implementation of Numerus Clausus. In 1919 he fled from Hungarian nationalists to Trieste, Italy. There, while involved in the leadership of a factory that he founded along with his business partners, he began to paint. After displaying much talent, from 1922-1923 Zilzer went to study painting at the school of the famous German painter Hans Hoffman in Munich.

In 1924, after acquiring a Triestian certificate which attested to his status as a Christian, Zilzer returned to Budapest and signed up for the Academy of the Arts. When his Jewish origins were revealed to the academic administration, he was dismissed from the Academy as “untalented.” Despite this humiliation, Zilzer pushed forward and published his collection of lithographs entitled, “Kaleidoskop,” in 1924. This publication was so successful that it enabled him to leave Hungary for good. After leaving Hungary in 1924, he lived in Paris until 1932 where he worked for the French magazine Clarté and the daily newspaper L’Humanité, both of which belonged to the Communist Party. It was during this time that he became friends with the French writer and publicist Henri Barbusse.

From 1929, Zilzer’s works became clearly anti-fascist in nature with several of his pieces focusing in on Hitler and Mussolini. In 1932, in an exhibition in Amsterdam, he presented his “Gaz” album, a collection protesting the use of gas as a form of warfare against the civilian population. That year, following the success of the original installment, the collection was also displayed in the United States.

Zilzer, the socialist artist who suffered at the hands of anti-Semitism from his youth, expressed his political and general worldview through his paintings. He was an artist ahead of his time, presenting the horrors of the First World War in the 1920s. When he published the collections “Kaleidoskop” and “Gaz” in 1924 and 1932 respectively, he hoped they would forewarn of a future war that the fascist authorities may inspire. Additionally, his paintings criticized the cruelty of the National Socialist Party, as portrayed in his drawings of concentration camps from the early 1930s.

Concentration camps were not an original invention of the Nazi apparatus in Germany. The camps set up by the British in South Africa during the Boer War at the end of the 19th century, as well as the Russian Gulag (a punitive system based on forced labor), preceded and influenced the formation of the Nazi camps. The first concentration camp on German territory was established in Dachau after Hitler came to power in 1933. The camp intended to imprison opponents of the Nazi regime as well as people from social groups marked by the Nazis as “undesirable,” including homeless people, homosexuals, and others. 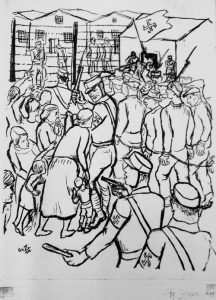 Zilzer belonged to the expressionist artistic movement, protesting the fascist ideology, calling for unity against the Nazi horrors in his published paintings as early as 1933.

By 1932 Zilzer left Europe and moved to the United States, where he spent a year traveling throughout the country all the while continuing to draw and to paint.

He moved to Hollywood in 1939 where he worked designing stage sets of famous films as an art director. Outside of his work in the film industry, Zilzer created more patents for items such as a toy book for children, a helical underground parking area with shelter and the “VISI-Recorder”.

After the end of the Second World War, Zilzer returned to Europe and traveled between Paris and Budapest for a few years. In 1954 he moved to his final residence in New York City where he worked for the television networks NBC and Cinerama, all while continuing to paint and manage his private exhibitions, until his death in 1969.

Throughout his tumultuous life, Zilzer rubbed shoulders with many well-known, contemporary personalities including American writer and publicist Upton Sinclair, the French director Jean Vigo, the Mexican painter Diego Rivera, the movie actor Gregory Peck, the writers Roman Roland and Ilya Ehrenburg, the Romanian sculptor Constantin Brâncuși, the Hungarian poet József Attila, the author and Holocaust survivor Elie Wiesel. Zilzer was also in close contact with the physicist Albert Einstein who received a collection of paintings gifted from Zilzer himself. This is certified by a letter of thanks sent from Einstein to Zilzer on March 26th 1933.

Records on “My Heritage” database show that Gyula was married to Irene P. Kellog. After their divorce he married Mary (Fuchs) Pitjel. Mary met Gyula in the USA, where she moved after the death of her first husband Kalman Pitjel, who fell during Israel’s War for Independence in 1948. This information is based on Tanya Rubinstein-Horowitz from Düsseldorf, Germany. Her father was a cousin of Kalman Pitjel.

For the Gyula Zilzer Archive at the National Library and detailed information click here.

The Gyula Zilzer Archive has been reviewed and described thanks to the generous support of The Leir Foundation.