Arthur Szyk's magnificent artwork on the Declaration of Independence highlights the deep, meaningful connection between the new Jewish state and the ancient Jewish past. 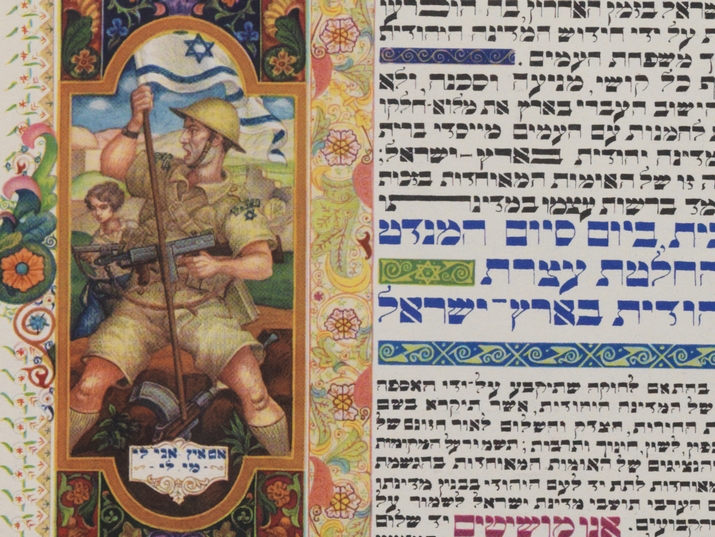 On May 22, 1948, Jewish-Polish artist Arthur Szyk finally received his long awaited American citizenship. He loved and cherished his adoptive country. America had spared Szyk the horrors of the Second World War. It was where he established himself as a well-known artist with a passion to combat the fascist, Nazi ideologies that destroyed Europe. Yet for Szyk, the experience of becoming an American was entirely dwarfed by the realization of his ultimate dream that occurred just eight days prior to his receiving his citizenship: The establishment of the State of Israel.

His wife, Julia Szyk, would tell the story of her husband, the famed artist, who burst into tears as he listened to the founding of the Jewish state on the radio.

The Artist Who Refused to Shirk the Burden of History

For as long as he could remember, Arthur Szyk found himself torn between the two opposing forces of history and modernity. From an early age, growing up in a secular Jewish family, Szyk found himself drawn to the stories of the Hebrew Bible. As a teenager, Arthur was sent to Paris by his family who encouraged him to cultivate his craft and to experience the modern art movement in the capital of European culture. It was there that Szyk developed his artistic style that combined his love of comic caricatures and the decorative illustrations of Medieval manuscripts.

At age 20, Szyk returned from Paris to his hometown in Lodz, Poland, and was quickly swept up in the activities of the local Zionist movement. In 1914 Arthur had the opportunity to join a delegation to the Land of Israel and got to see the developing Jewish Yishuv with his own eyes. He was especially taken by the first Hebrew city, the fledgling five-year-old Tel Aviv. When the First World War broke out, Szyk returned to Poland. Szyk lived in Paris and London between the two World Wars and by the time the Second World War was in full force in 1940, he left Europe for good and made his way to the United States.

When Adolf Hitler initially came to power, Szyk recognized the danger that the dictator posed to the entire world. With the outbreak of World War II in 1939, Szyk abandoned his personal projects and committed himself to fight with the Allies against the Axis of Nazi Germany, Fascist Italy, and Nationalist-Imperial Japan. His caricatures earned him a reputation as a single minded artist, relentless in his pursuit of justice and in following the tumultuous politics of his day. His critics however, labelled him as nothing but a propagandist – an opinion that is still commonly held today.

Upon hearing of the establishment of the State of Israel, Arthur Szyk turned to the new Israeli government and requested permission to illustrate the Israeli Declaration of Independence and the  declaration that immigration to Israel was now free and open for the Jewish Diaspora.

As befitting a Jewish Modern artist with a passion for Zionism, Szyk created a series of magnificent images for the declaration scroll. These images included multiple Stars of David, prayers to the Almighty, famous biblical figures including Moses and Aaron, as well as the depictions of more modern characters, including a Jewish farmer planting a field and an IDF soldier bearing a flag in one hand, and rifle in the other.

It is possible that in this project, Arthur Szyk worked to artistically settle the conflict between the traditional position of trusting in God to protect the Jewish people from their enemies and the Zionist declaration that the Jews must stand strong and independent, protecting themselves from their enemies. As the phrase from Pirkei Avot, the Ethics of our Fathers, states, “If not me, then who?”

Naming the Soldiers: A Special Joint Project by the National Library and Facebook