Even Fake IDs Could Not Save Them From the Nazis

Roza Bahar and her sister Matilda were willing to try anything to escape the Nazis but in the end, it was their fake IDs that led to their deaths. 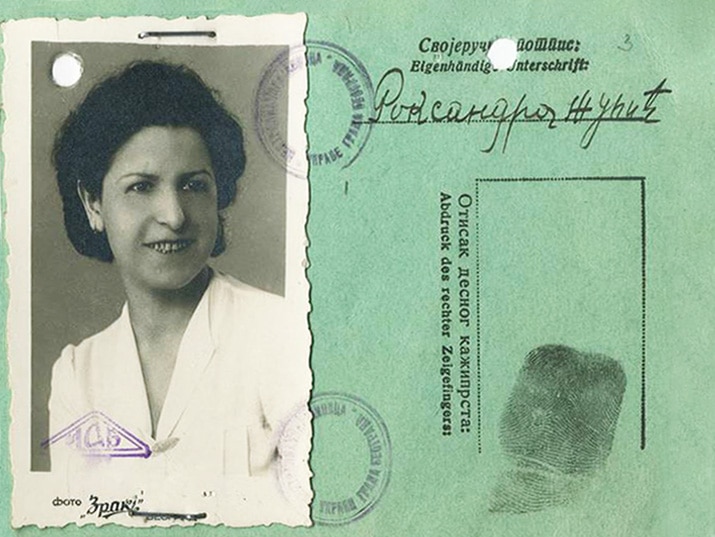 Roza Bahar was born on August 15, 1916, in a town called Pristina in the south of Serbia. She grew up with her older sister Matilda and her two brothers, Haim and Rahamin. After completing her schooling, Roza found work as a clerk. Little more is known of her life before the Holocaust; we don’t have information about her personality, her interests or hobbies, her social life or her experiences, but in the Historical Archives of Belgrade there are several documents that tell the story of her struggles during World War II and the events that eventually lead to her death.

The Jewish community of Serbia dates back centuries to the times of the Romans.  For many years the Jews successfully participated as equal citizens in the local economic, political, social and cultural spheres and contributed greatly to the development of the capital city of Belgrade.

Jewish life in the region was brusquely interrupted with the start of the Second World War, and life as they knew it came to an end. The Jewish community of Belgrade had grown to 12,000 members but just over 1,000 survived the horrors of the Holocaust.

In early 1941, the Germans invaded Serbia and began raiding Jewish homes and businesses, evicting the Jewish residents and owners and confiscating their property. Many Jews were shot and murdered in mass executions carried out by the Germans during this time.

According to a Special Police file preserved in the Historical Archives of Belgrade, during the raids on the Jewish community Roza Bahar and her sister Matilda were caught holding forged identification cards listing their names as Roksandra and Mileva Zunic during a raid on the apartment of a gentleman named Radoje Zunic. Radoje tried to protect the women and presented Roksandra, otherwise known as Roza, as his fiancé but his efforts were for naught.

Roza and Matilda were arrested on the spot when the Germans discovered the forged IDs and were sent to the Sajmište concentration camp, one of several operating in the region, to join the thousands of Jewish men, women, and children who had been rounded up throughout Serbia in late 1941 and early 1942.

The Sajmište concentration camp was built on the former Belgrade fairgrounds, a place that was intended to show the great progress in industry taking place across Europe. The prisoners were kept in squalid quarters and faced harsh weather conditions and food scarcity with many dying from influenza outbreaks, frostbite, and starvation.

Sajmište began operations as an extermination camp in 1942 when a mobile gas chamber arrived at the fairgrounds. Under the guise of transfer to a different and better-equipped camp, prisoners who had volunteered for the transport were loaded into the mobile gas chamber and were killed by carbon monoxide poisoning.

The Historical Archives of Belgrade were established in 1945 by the Belgrade City Council with the task of collecting, processing and protecting material generated by city authorities and various public institutions belonging to the city’s 17 different municipalities.  Today, the archives preserve 13 linear kilometers of archival material in 2,737 fonds and collections. The archives also preserve numerous personal and family collections of distinguished individuals from Serbian history or important families who participated in crucial historical moments of the Serbian capital.

Materials kept in the archives preserve evidence of the Jewish community’s everyday life in Belgrade over the last two centuries. Numerous cherished documents touch on many aspects of life of Jewish community members – men, women and school children alike.

The Historical Archives of Belgrade has begun a new and important initiative entitled, “The Jewish Digital Collection Project,” with the goal of creating an online database of Jewish archival materials using all the material that has been preserved in the Archives of Belgrade that relates to the Jewish community and Jewish heritage in Belgrade (Serbia).

As part of this project, 25 collections of documents will be processed as well as documents belonging to six elementary and secondary schools in Belgrade.  Once the research is finalized, the item descriptions will be translated into English. Currently, the internal archive database already contains some 27,000 records, with between 70,000 to 100,000 records set to be processed and scanned by the end of the project for digital preservation. This post was written as part of Gesher L’Europa, the NLI’s initiative to connect with Europe and make our collections available to diverse audiences in Europe and beyond.