The Archivists and the Forgotten Boxes: Rediscovering the Victims of the Sajmište Concentration Camp

Home > Antisemitism > The Archivists and the Forgotten Boxes: Rediscovering the Victims of the Sajmište Concentration Camp
Diaspora 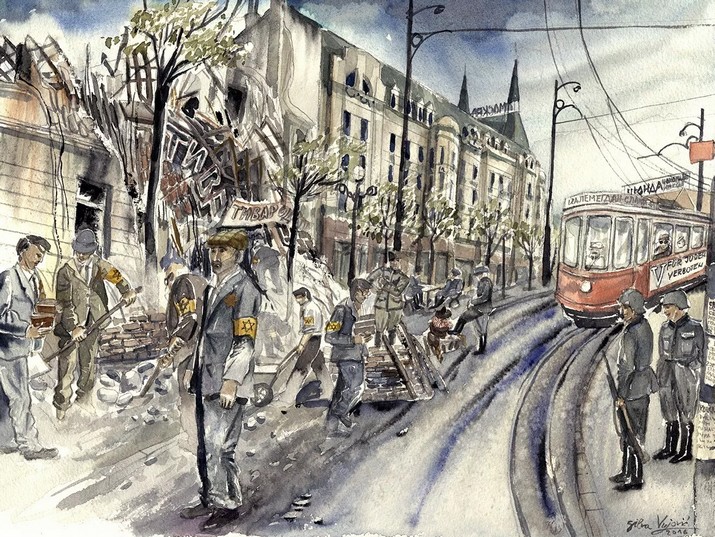 A few years ago, the archivists at the Historical Archives of Belgrade discovered 6 boxes among old unsorted piles hidden behind the shelves in a far dusty corner of the depot. When they removed the lock from the first box, they were suprised to find a 14-year old girl with big eyes staring back at them with a smile from a pile of old papers: “Hello, my name is Ester, and I’ve waited patiently for 70 years to tell you that once I used to be alive!”

When the archivists dug deeper in the box, they discovered that Ester had been a student at the First Belgrade Gymnasium. She had been popular, with many friends and a loving family. “We lived in the Dorćol neighborhood in Belgrade, and I used to dream about becoming an actress,” Ester told them.

All of a sudden, more voices began to emerge from the box, and then other boxes on the surrounding shelves began to chime in. Soon enough, the entire archive depot was filled with thousands of voices echoing throughout the storage chamber.

The boxes found in the Historical Archives of Belgrade revealed forgotten, unprocessed and unlisted documentation regarding the lives of several thousand Belgrade Jews from who were killed at the Old Fairground (Sajmište) concentration camp.

During WWII, in autumn and winter of 1941, the Old Fairground was where the Nazis and their allies brought Jews from all over occupied Serbia to be killed using an infamous gas-van known as  the “dušegupka.”

On May 29, 1942, Franz Rademacher, Chief of the Jewish Department in the German Ministry of Foreign Affairs in Berlin, stated that the “Jewish question in Serbia has been solved.”

What he meant was that almost all of the Jews in Serbia had been killed. From that day on, the Old Fairground remained a symbol of total destruction for the Jews of Serbia.

Inspired by the discovery of the boxes filled with forgotten documents, the archivists of the Historical Archives of Belgrade began a complex and long-term project – Much like detectives, the archivists worked to combine the newly discovered materials with other pre-war archives including school registers, membership lists of sport-club associations, employees lists, property registers, old photographs, letters and newspaper clippings…

Day after day, piece-by-piece, the archivists worked to put together their huge puzzle. Together with their colleagues and historians, they were determined to once again reveal a vision of pre-war Belgrade that could be shared with their Jewish neighbors, friends, and schoolmates. It was like traveleling back in time, a vivid and colorful picture was appearing in front of their eyes – and with that, Ester was reborn.

The “Ester” graphic novels respresent an extremely significant educational resource. They consist of a series of dramatized stories about the Jewish victims killed in the camp at Sajmište in Belgrade (Judenlager Semlin) at the beginning of 1942. The stories focus on young victims and their families, their pre-war life, the situation under the German occupation and during the Holocaust. They are based on true historical events and characters.

“Ester” was produced by an international team consisting of historians, teachers, experts on Jewish culture and tradition and Holocaust survivors, as well as a group of illustrators from Serbia and the Netherlands who worked together on bringing the vision to life.

The Ester graphic novels were created as a reconstruction and dramatization of history, based on available fragments of personal stories. While keeping historical events and facts central to the stories, we put the main focus on the human aspects, feelings, and thoughts of the main characters, with the aim of engaging students on a different level, thus creating a creative and engaging tool for learning about the Holocaust.

A Story about the Red Race Car

The first story shared in this project is a dramatization of the Frelih family’s history in pre-war Belgrade, based on true events, real people, historical documentation and testimonies.

Aleksandar Frelih is an eleven-year-old Jewish boy from Belgrade. As we follow Aleksandar and his family through twelve illustrated scenes, we learn more about their life, the local Jewish culture and traditions, and about pre-war Belgrade and Serbia in general. When the war brought anti-Jewish measures, repression, and death, the Frelih family shared the same destiny as thousands of other Belgrade Jews. Above all else, “Story about the Red Race Car” is a human story about friendship in times of suffering, told from the perspective of a young Jewish boy.

The Frelih family is registered in the Sajmiste database. Since there were no photos available that could help to visualize the story to the students, illustrations based on actual historical documentation were created instead.  The illustrations that accompany the story speak for themselves, telling the tale of a proud and rich Jewish culture in Belgrade, a happy young boy living his day to day life, and the untimely end that his family faced like so many others.

Besides this story, the educational material consists of two other stories, about the Demajo and Fisher families, both of which were destroyed in the Sajmiste concentration camp.

The international project titled Escalating into Holocaust was organized by the Historical Archives of Belgrade, Terraforming – a non-governmental organization  from Sweden, the Center for Holocaust Research and Education based in Belgrade, the NIOD Institute for War, Holocaust and Genocide Studies based in the Netherlands and the University of Rijeka of Croatia. The project was implemented in 2016 and 2017 in Serbia, Sweden, and the Netherlands. The project was funded by the Education, Audiovisual and Culture Executive Agency (EACEA), as part of its Europe for Citizens, European Remembrance program.

The Historical Archives of Belgrade, as the leader of the project, created a database of victims killed in the Sajmiste camp and, for the first time, the names of victims of this camp were gathered in one place.

As part of the same project, the Terraforming organization developed teaching materials based on the stories of the victims killed in 1941 and 1942 in Sajmiste. While working on this material, “Ester” was born.

The development of Ester began in the framework of the “Escalating into Holocaust” project, with the support of the ODIHR project ”Words into Action to Combat Antisemitism.”

Even Fake IDs Could Not Save Them From the Nazis

Before and After the Holocaust: The Life of a Jewish Doctor in Niš