The Sandys Row Synagogue has kept its doors open through two World Wars and remained active from its original consecration in 1870 until today. 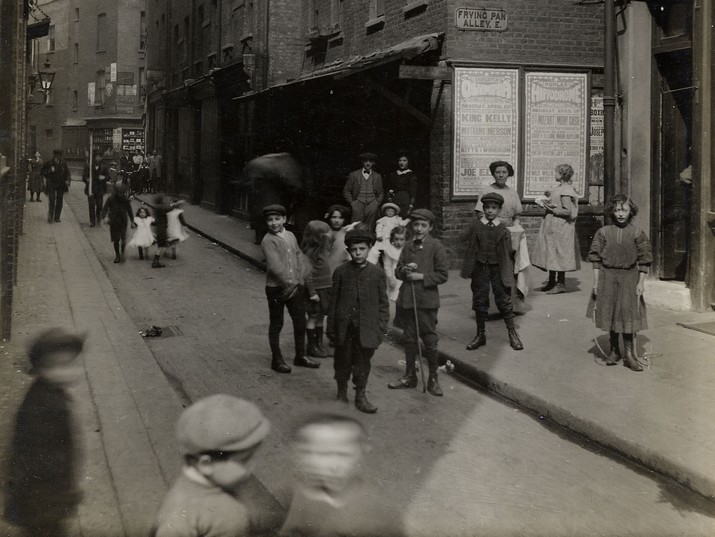 Today it is almost impossible to get any sense of a Jewish presence in the neighborhood of East London, but there were once nearly one hundred and fifty synagogues operating in the area. Now Sandys Row is the last functioning Ashkenazi synagogue in Spitalfields, an area of East London at the heart of the former Jewish East End. Dutch Jewish migrants, who began arriving in London from Amsterdam in the 1840s, established the synagogue in 1854. They were economic migrants seeking a better life, rather than refugees fleeing persecution like the thousands of Ashkenazi Jews who came after them in the 1880s from the Pale of Settlement.

This small, distinctive, tight-knit Dutch Jewish community of a few hundred people settled in the streets of Spitalfields. They had their own traditions and customs which were different from other Ashkenazi Jewish groups and continued to practice the trades they had brought with them from Holland. These trades were predominately cigar making, diamond cutting and polishing, and slipper and cap making. Many small workshops were established and businesses were passed down through generations.

“The Chuts,” as they were known locally, refused to join any of the larger existing synagogues. They wanted their own establishment and formed a “Chevra”; the Society for Comfort of the Mourners, Kindness, and Truth, which originally functioned as a burial and mutual aid society and later became a way of raising funds to purchase their own building. By 1867 the Society had amassed enough money to acquire the lease on a former Huguenot Chapel in Sandys Row, a small side street in Spitalfields near Liverpool Street Station and the City of London.

The community employed Nathan Solomon Joseph, one of the most famous synagogue architects of the time, to remodel the chapel. He kept many original features of the Georgian interior, including the roof and the balcony and added a new three-story extension onto the building, creating a vestry and accommodation for a rabbi and caretaker. He also designed a beautiful mahogany ark which can still be seen recessed into the eastern wall of the building framed by neo-classical columns. Since it was consecrated in 1870, with ‘an immense throng of Jewish working men assembled – with devotion, enthusiasm, and solemn demeanor – to join in dedicating the humble structure to the worship of God,’ Sandys Row Synagogue has never closed its doors, operating through both World Wars and into the twenty-first century.

Apart from some pine wood paneling which was added in the fifties along with some pine pews, the synagogue today looks much the same as it did when it opened in the nineteenth century. It was described in the Jewish press in 1870 as ‘a sacred place…simple, yet charming,’ a building that ‘invites the worshipper to religious meditation.’ The same holds true for the interior of Sandys Row today; it is an oasis of calm from the bustle of the city outside. The building still evokes the sense of awe and quiet meditation described by the journalist who witnessed the consecration ceremony nearly a hundred and fifty years ago.

Until recently, little has been known outside the congregation about this wonderful building and the Dutch Jewish community who established the synagogue. But during the past few years, I have been working with the synagogue as a historian and archivist to uncover more about the history and heritage of the building thanks to a grant from an anonymous benefactor.

The project began by collecting oral histories of past and present members of Sandys Row. We have recorded interviews with members in their homes across London, as well as locally with the few elderly Jewish people who remain in the area. They spoke of a neighborhood once bursting with life, filled with kosher butchers, bewigged women, friendly societies and Yiddish speaking traders. They told of a time when there was a synagogue or house of prayer on nearly every street in the area and the vicinity of Sandys Row was filled with Jewish shops, workshops and thousands of stalls from Petticoat Lane.

All of our interviewees had fond memories of Sandys Row Synagogue. Some, like Pamela Freedman and board member Rose Edmands, are directly related to the Dutch founding members.

Rose, whose original Dutch surname was Engelsman, said her entire family were members.

The current president of Sandys Row, Harvey Rifkind, told me ‘during the fifties and sixties, the synagogue flourished. On Shabbat, there were one hundred to two hundred people there and on the high holy days, you could not get a seat. People literally sat on the floor in the aisles.’

Today the synagogue is still functioning with afternoon services every weekday and weddings taking place regularly as a younger Jewish community has started to move back into the heavily regenerated tourist area of East London.

Alongside gathering the oral history recordings of people’s memories of the synagogue my role at Sandys Row has also involved depositing a great deal of handwritten records and other artifacts from the synagogue at the Bishopsgate Institute Archives in London.

Over time, most of the synagogue’s records had been scattered around the building. Some were found in the safe in the vestry, but the majority were retrieved from the eighteenth-century basement which is practically unchanged from when the building was erected in 1766 as a Huguenot Chapel. The documents we found include nineteenth-century marriage certificates and an almost complete collection of handwritten minute books from the time the synagogue opened until the mid-twentieth century. This original material has now been safely deposited at the institute. Furthermore, we have spent many years digitizing the entire collection, which is available to view both online at www.ourhiddenhistories.com and has also been deposited at the Central Archives for the History of the Jewish People (CAHJP) at the National Library of Israel. Dr. Yochai Ben-Ghedalia, the director of the archives had this to say:

The CAHJP holds thousands of archives of Jewish communities, institutions, international organizations and prominent individuals from all over the globe. Despite the extensive coverage of communal collections, the CAHJP holdings do not include any full-scale archives of Ashkenazic congregations from London. Hence, the rich archive of the Sandys Row Synagogue, going back to the mid-19th Century, deposited at the CAHJP as a digital copy, is an important contribution, adding missing stones to the mosaic of Jewish history.