No Friend of Bacteria: A Letter from Louis Pasteur

Home > Sidney Edelstein > No Friend of Bacteria: A Letter from Louis Pasteur
Land of Israel

This is the story of a promising young student who became the “father of microbiology”, but it didn’t happen by accident; a personal tragedy spurred Louis Pasteur to search for cures for infectious diseases 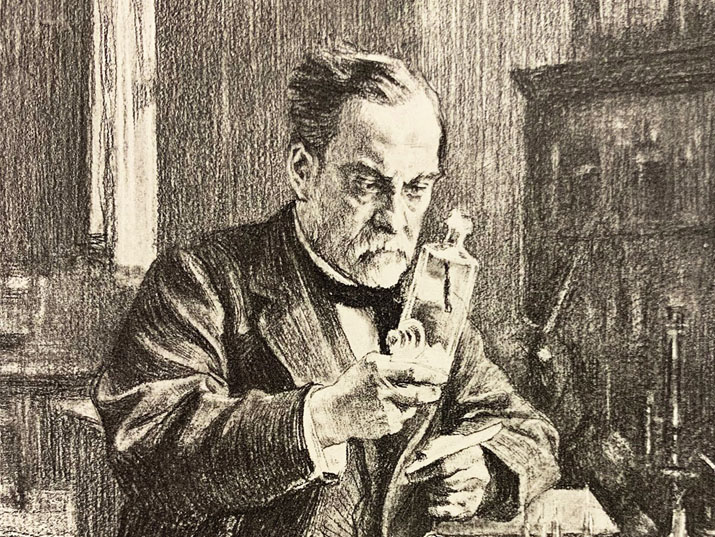 Louis Pasteur was not born into a family of means. Growing up poor, he received a Catholic education and did not particularly excel at his studies. No one imagined that he would become one of the most prominent scientists of all time for his contribution to the field of medicine.

In his early teens, Louis’ interest in reading grew and he eventually became his own schoolteacher’s assistant. At sixteen, he moved to Paris for his studies, but an acute case of homesickness led him to return home. He enrolled in a local college and successfully completed his bachelor’s degree in science in 1840 and master’s in science in 1842. The next year, he fulfilled his lifelong dream of attending the prestigious École Supérieure Normale (after having failed his first attempt at acceptance).

In 1846, Pasteur began his research in the field of crystallography (the scientific study of crystals), for which he was made a Chevalier of the French Legion of Honor in 1853 for his discovery of the differences in the crystal structure of the two enantiomers of tartaric acid. At age twenty-seven, Pasteur was appointed professor of chemistry at the University of Strasbourg.

While teaching at the university, the brilliant young scientist met Marie Laurent, the daughter of the university’s rector. They married on the 29th of May, 1849 and began working together, with Marie assisting in scientific experiments. Their future seemed very bright, until tragedy struck. Three of the Pasteur’s five children died from typhoid, not unusual for that time, but Pasteur swore he would do everything in his power to find a cure for communicable diseases.

In 1854, he was appointed dean of the faculty of sciences at the University of Lille, the same year he began his study of fermentation. In the framework of his research, he came up with a solution to the problem of bacteria. His idea eventually led to a process that would significantly reduce the presence of bacteria in milk, wine, beer, fruit juices and honey.  In this process, liquid (milk, for example) is heated rapidly – almost to the boiling point, and immediately cooled. The purpose is to kill harmful viruses and organisms such as bacteria, protozoans and fungi that are present in the liquid without compromising the liquid’s nutritional value or taste. Beyond extending the shelf life of the liquid, the process helps to prevent disease. This process, which we call pasteurization, was named for its inventor – Louis Pasteur. For his work, Pasteur was awarded the prestigious Rumford Medal in 1856.

The National Library of Israel is in possession of a rare letter sent by Pasteur himself to an unknown recipient, referred to simply as “Monsieur,” which was written, in French, at some point between 1868 and 1869, and which reveals that at that time of its writing, Pasteur was deeply engaged in the further development of the pasteurization process:

“[B]efore anything, and as I mentioned in my last message to you, I ask that you take note of the necessity of performing the heating of the bottles inside the large-scale heating containers; and remember the fact which the professional committee finally agreed upon at the last wine tasting, that the color of the wine that was heated when protected from air was stronger and even somewhat darker than that of the same wine when it remained unchanged and unheated. One can get an idea of the speed of the oxygenation of the wine by looking at the exact experiments appearing in my publications. Do not forget that the wine in bottles or in any other vessel, after it has been sealed a few days before, and after moving it from vessel to vessel to remove the sediment, will, during its decomposition, contain only nitrogen or carbonic acid and no trace of oxygen, but will contain oxygen the very moment it comes into contact with air. Furthermore, bear in mind that the solubility of gases is proportional to pressure.

Finally, it is best to remember that the wine, at the first removal of sediment after the end of fermentation, is saturated with only carbonic acid gas; also on this point refer to my publication “Etudes sur le vin” – the amount of dissolved carbonic acid, at this moment, is so great and so ready to be released that it might resist the intake of air in your device.

I am far from being against cooling after heating. Here again, one must take into account the oxidation process. With the reduction in volume in a barrel, air will penetrate, however it is perfectly clear, from the point of view of preservation principles, that it is safer to fill while heating; but the germs of the wine development process are many and much more active than those created by the air. Through heating, the wine has acquired such features of preservation as to allow, in most cases, even further maneuvering at a later date without great danger to its preservation. In short, with regard to the practice of immediate cooling after heating it will be possible to formulate an opinion after the accumulation of [data from] experiments. In the current state of affairs, I am far from doubting the wisdom of this practice. When heated in a bottle it is clear that the process is more or less natural and certainly not harmful here…”

Pasteur did not stop there. His contributions spanned a variety of fields and even included the development of a vaccine for rabies. The first successful experiment with the vaccine was performed on a sick child on July 6th, 1885. Following the experiment’s success, he received inquiries from across Europe from people who had been bitten by wild animals.

In 1887, Pasteur founded the medical research institute which bears his name to this day, and which he headed until his death in 1895. Long after his passing, his name is still familiar thanks to his discoveries relating to the principles of vaccination, microbial fermentation and pasteurization. The Pasteur Institute continues the work he began: developing vaccines and drugs to fight disease, including current research being conducted in the hopes of developing a vaccine for the Covid-19 virus.

Many thanks to Elizabeth Friedman and Sharon Assaf for their assistance with translation.   If you liked this article, try these: When the Spanish Flu Arrived in the Land of Israel Newton’s Temple What Did Freud Really Think of Zionism?