A battered copy of “In the Heart of the Seas,” rescued from anti-Semitic riots in Germany, was returned to its author, S.Y. Agnon, with a letter telling the incredible story of its survival 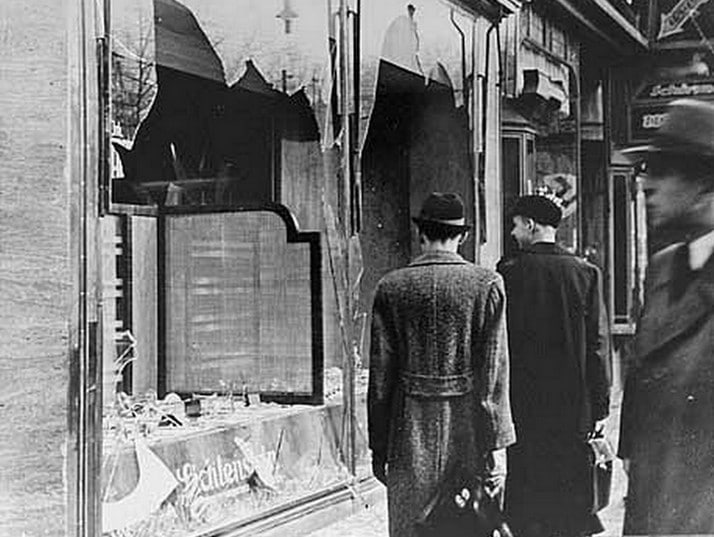 In the cultured, sophisticated environment of Germany’s Weimar Republic in the 1920s and early 1930s, Jews made up an integral part of German society, experiencing the best that the country had to offer. When the Nazi Party took control of Germany in 1933, life as the Jewish community knew it was quickly brought to an end.

On November 3rd, 1938, a young Jewish man named Herschel Grynszpan, in an apparent reaction to his family’s deportation from their home in Germany to Poland, shot a German diplomat in Paris where he was living at the time.

The death of the diplomat sparked rage in the Nazi party, which decided to use this incident as an excuse to carry out a widespread pogrom against the Jews of Germany.  Testimonies that came forth following the events told of how the press was instructed to push the story and to exaggerate the details of the incident to inspire anger among the public while the Nazis prepared for a carefully orchestrated night of violence against the Jews.

November 9th, 1938. Kristallnacht. Some 90 Jews were murdered, more than 30,000 were arrested. Over 7,000 Jewish businesses, so carefully grown and cultivated, were trashed, looted, and burned to the ground along with more than 1400 beloved synagogues.

On that fateful night, Felix Pinczower, a resident of Berlin at the time, found himself in the streets, amid a maelstrom of anti-Semitic violence. He was pushed into a large crowd and witnessed a mob looting a Jewish book store. The vandals had shattered the store windows and were systematically throwing the books out into the street for the pages to be torn out and stomped on before being discarded into a large trash heap.

As he watched the violence unfold, Piczower noticed a copy of “In the Heart of the Seas,” a book by the famed author, S. Y. Agnon, in the original Hebrew, lying on the ground. The book tells the story of a group of Hasidim on pilgrimage to the Holy Land. This particular book was spared the fate met by thousands of other volumes which were destroyed that night. This copy of “In the Heart of the Seas,” with its simple white cover, was saved by Felix Pinczower on the terrible night of bloodshed and cruelty which shattered Germany’s Jewish community.

As the mob around the book store was broken up, Pinczower was arrested along with thousands of others who were rounded up on Kristallnacht. He was taken to a concentration camp where he stayed for six long weeks. Pinczower was eventually released from the camp once his official request to leave Germany was approved.

On May 8th, 1939, he sent the rescued book along with a descriptive letter of the violence he had experienced to S.Y. Agnon, the book’s author, after immigrating to the Land of Israel and establishing his new home in Tel Aviv.

In his heartfelt letter, Pinczower described how, upon witnessing the scene at the Jewish bookstore, he had become consumed with rage.  Just as he was about to take action, something that could have cost him his life, a gust of wind picked up and a small, simple-looking book landed at his feet. He quickly picked it up, brushed off the cover, and took it home.

“The little book eluded my memory,” wrote Pinczower.  “Only when my belongings was being packed beneath the eyes of the customs clerks, did it reemerge. ‘Do you want to take this dirty book with you?’ the customs man asked. ‘Yes,’ I replied. ‘It’s an interesting book that contains a special story.’ He nodded and examined it again. Suddenly, he had an idea. I saw how his face was contorting into a devilish smile. He uttered not a word, but flipped through the book, page by page, checking it against the light, apparently with the thought that foreign currency was hidden among its pages. And then, when the inspection yielded nothing, he returned the book to me. I expressed my preference to place the book in my carry-on luggage, rather than stowing it in the baggage compartment, so that I might read it on the voyage.”

It was only once he had boarded the ship to take him to safety that Pinczower finally had the opportunity to properly examine and read the book. He was amazed at what he found between the stained covers: the story of a group of Hassidim who set out on a sea voyage lasting several months before finally arriving at their destination – the Land of Israel.

“Was it not a direct sign from heaven that this, of all books, fell into my hands, truly in the literal sense of the expression? I do not believe in coincidence in life,” wrote Pinczower.

“Is it not true that today, as well, ships set sail and make their way over months at sea in order to bring refugees to Eretz Israel? People waiting in anticipation for the land of their longing, with the same sentiment.”

The book became Pinczower’s companion, a constant reminder of what awaited him on the other side of his journey. Once he had arrived safely in Mandatory Palestine and settled into his new home, Pinczower felt the time had come for the book to return to its author and to tell the story of its incredible journey.

He concluded his letter with a simple request of Agnon, “to integrate the book into your library as an anecdotal item – a book that has its own story, like that of any human being.”

“If only this book, which came out of Zion and returned to Zion, might serve as a symbol of the ingathering of our dispersed writings, which are held in unworthy hands.”

Today, the letter and book sent by Felix Pinczower to S.Y. Agnon, can be found in the personal archive of S.Y. Agnon, housed at the National Library of Israel.