Back in the USSR: Recollections of an American College Kid Turned Manuscript Smuggler 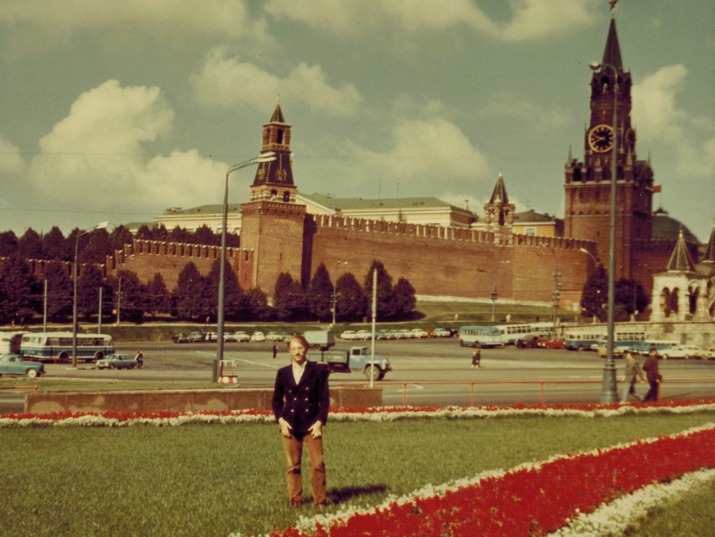 In July 1971 in Moscow, after dinner with my tour group, I hurry along a memorized route in the direction of nearby Red Square. Kids are taught to inform in Komsomol, the political youth organization in the Soviet Union, so better not to ask directions.

I tap lightly on an apartment door. I hear noise within and someone approaches the entrance and speaks through the solid wood in Hebrew, “Erev tov.” “Good evening.”

I am startled that he would speak Hebrew to an unexpected knock. Code? Then the voice speaks in Russian.

I am an American, on my way back to Los Angeles after spending my junior year at the Hebrew University, with this slight detour. I have to wait as he unbolts three locks. Lev Navrozov throws open the door to a huge and elegantly decorated apartment. Elegant crystal fills a tall cabinet. His wife appears, a half-tied apron dragging from her waist. She motions me to sit and she speaks vociferously to her husband.

“My wife would be pleased if you would have supper with us but she is worried since the meat is not kosher.”

She vanishes into the kitchen. I explain that his friend, Professor  Mikhail Zand, a recent émigré and Professor of Oriental Languages, spent an evening in my dorm room writing his official letter of arrival to Prime Minister Golda Meir and taught me how to find this apartment. Zand had introduced Navrozov to the Jewish Resistance Movement, a natural ebb from the ‘democratic’ movement of which they were a part. I unburden myself of the Hebrew primers and histories I’m hauling, completely unavailable in the USSR.

“Thank you,” he says. “You must understand Soviet mentality to realize how important these are to us. Everything here fluctuates, dependent on the caprice of the government. There is a thirst for textbooks. In the USSR, where so much energy is expended on propaganda, books take on an exaggerated significance. They transcend their words to become symbols, nurture strength, foster the will to struggle.”

Soon his wife delivers a full course meal. I am too stuffed from the group Chicken Kiev to eat much. Sensing my embarrassment, she returns with a bowl of raspberries on crushed ice. This opulence stuns me and then he explains. Around the globe, people translate from their acquired language into their mother tongue. Navrozov is the preeminent translator of books and articles in the Soviet Union from Russian into English, has tackled Dostoevsky, Herzen and hundreds of technical articles. Soviets cannot buy books from London. Stalin created the Referent Faculty of the Moscow Institute of Foreign Languages to produce a generation of experts in Western languages and culture. Forty-six years later, I created a character in The Spy’s Gamble with Navrozov’s bona fides.

For the following week, I continue on my tour which takes me to Leningrad, Kiev, and Tashkent and Samarkand in Uzbekistan. In the evenings, I meet with Jewish dissidents in their homes. Saturday, I head through Red Square. The guys are waiting for me outside and guide me back to a basement which I see in the daylight is an artist’s studio. I had been here a week earlier to meet the leaders of the Soviet Jewish movement and discuss the transfer of a manuscript on microfilm that I would carry to London.

I jokingly ask, “Why aren’t you in synagogue?”

Navrozov translates and they all laugh. He says, “We have the address of KGB central headquarters if you would like it. Why settle for the synagogue, it’s merely a branch office.” Informants.

I have a present I’ve saved, a slate, the kind children write on then pull up the plastic to erase it. They go bananas.

Navrozov says, “During a year we probably use tons of paper to talk.”

They provide a list of those in desperate straits. They give money when they can. An artist hands me ten Chagall-like lithographs, ink on parchment. They place the lithographs between tourist posters of the Soviet Union, rolled the posters and lithographs together and slipped them into a tube. I give the artist my address. I’ll mail them to him when he gets out. All unpublished writings and art are considered property of the state and must remain behind.

I take a fresh 35mm Kodak film canister from my bag. London instructed that I can secret the microfilm in it, then throw it in my camera case with a slew of exposed and unopened rolls. In my room I had carefully opened the box with a knife and pried off the end of the yellow canister. I remove the film, sever a long length of lead, insert the roll of microfilm and tape the lead to protrude several inches from the canister the way new film appears. I try to snap the round end back but can’t.

“I engineer,” someone says and grabs it from me.

Another speaks in Russian and they all laugh. “He asked what he knows about engineering. He has not worked in two years.”

I love these guys. Somebody gets it on and we glue the top of the small rectangular yellow box closed.

That manuscript was My Father Killed Mikhoels by the dissident writer, Vladimir Gusarov. Solomon Mikhoels, the Yiddish actor and director of the Moscow State Jewish Theater, was assassinated in Minsk in 1948 on orders of Josef Stalin who had been pursuing an increasingly anti-Semitic policy.

Before very long, Gusarov’s work found its way to the National Library of Israel.

A History in Pictures: The Jews of the USSR