A look back at the disaster which befell the city of Brody in 1867, and how Europe's Jews came together to help the victims 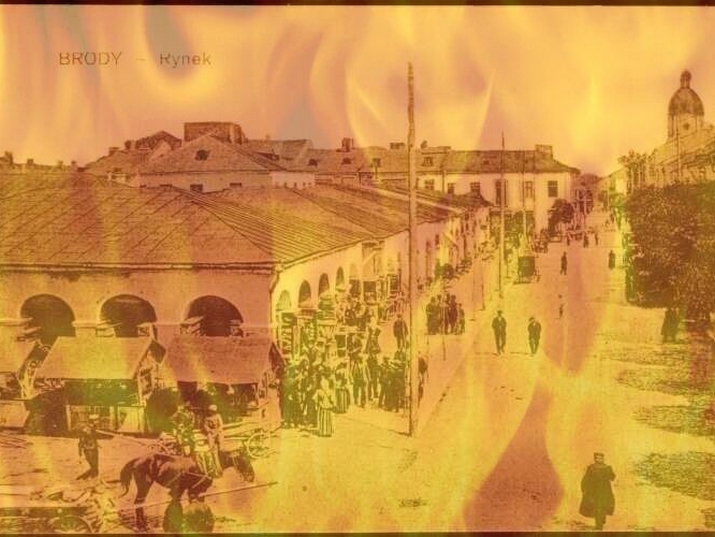 “There is no way to estimate, no way to tell or describe the great catastrophe that occurred in our city that day…  All the houses were completely consumed by fire, all that people had worked for came to nothing, everyone’s faces became disconsolate from the flames, holy books flew into the air, utterly sparks of light. The new and old synagogues, the houses of study, and the hospital went up to heaven in fiery smoke.”

Brody was a commercial and intellectual center. Since at least the 1500s, it was home to a thriving Jewish community and notable figures from different streams of Jewish thought and life had called it home – Kabbalists, Hassidim, proponents of the Enlightenment, even famous writers and entertainers.

It was known as the “Jerusalem of Austria”.

By 1867, Brody’s population had reached about 20,000, some 75% of whom were Jewish. In March of that year, the Kaiser himself granted the Jews of Brody the exceptional right to hold up to half of the seats on the municipal council as opposed to the one-third generally permitted.

Brody had suffered fires in its history, even as recently as 1859. Just a generation before that, a massive blaze in the village inspired noted Hebrew scholar, poet and Brody native Marcus Strelisker, to publish “The Cup of Poison“, a raw lamentation on the destruction of his hometown, which included these words:

“Poor turbulent Brody! She almost turned into a wasteland
Soon a moon will have passed, and she is not yet consoled
The fury has not yet subsided, the wrath has not yet abated!”

The city had just a few poorly outfitted firemen. Nearly all of the homes and roofs were made of wood.

Besides the destruction of central institutions, two major synagogues and a hospital, according to one account no less than 32 batei midrash (Jewish houses of study) were destroyed in the 1867 blaze, alongside between  800 and 1300 homes (sources vary). The wooden homes served as ready kindling. Some roofs were made of zinc, which turned into molten streams running down the collapsing walls of what had once been homes, oozing into the streets.

“I saw  masses of people running and not getting tired, their eyes  turned to the heavens, towards clouds of smoke rising higher and higher. Before I knew it I was among the runners… I became one of the terrified ones lifting my legs to run towards home, and before I even got to my doorstep, ha! Fire stood over me, and every place I went there was a pillar of fire before me…” wrote Baruch Werber, the editor of local newspaper Jbri Anochi, a week after the blaze.

Thousands like Werber fled, gathering their loved ones and most valued possessions and running to the fields.

Then something kind of beautiful happened.

As the flames continued dancing in the sky and the smoke billowed on, people began to arrive from the surrounding villages. Some had seen the fire and smoke, while others had heard the fast-spreading rumors of Brody’s fate. They came from places like Radyvyliv, Dubno, and Tarnopol, and brought with them clothes, blankets and bread.

As the fires retreated and the embers sizzled into ash over the coming days, many of those fortunate enough to still have a bit of roof over their homes invited the less  fortunate into their homes until the devastation could be better assessed, and the reconstruction could begin.

In the coming weeks, accounts of the carnage, accompanied by pleas for assistance, and words of gratitude to those who had already sent aid cluttered newspaper pages. Donations came in from near and far as simple peasants, synagogues and communities heard the plight of their neighbors and availed themselves to help. Donations were listed in Werber’s Jbri Anochi newspaper, even spurring complaints that he had not included them all.

Leon Ephrussi, one of the richest men in the world, a “King of Wheat” described in Edmund de Waal’s The Hare with Amber Eyes, even spearheaded a campaign to raise funds for the decimated shtetl, where his wife Minna had grown up.

According to a first-hand account from Adela Landau Misis, who was a child at the time, the fire prompted the creation of a well-equipped volunteer fire department. Wood shingles were banned.

All of the homes in Brody were re-built with better materials and iron roofs, and “The Jerusalem of Austria” never again saw a fire like the one kindled that Lag B’Omer.