This watershed event would pave the way for the groom to become one of the most important figures in 20th century Judaism. An invitation to the wedding was recently discovered in the National Library archives. 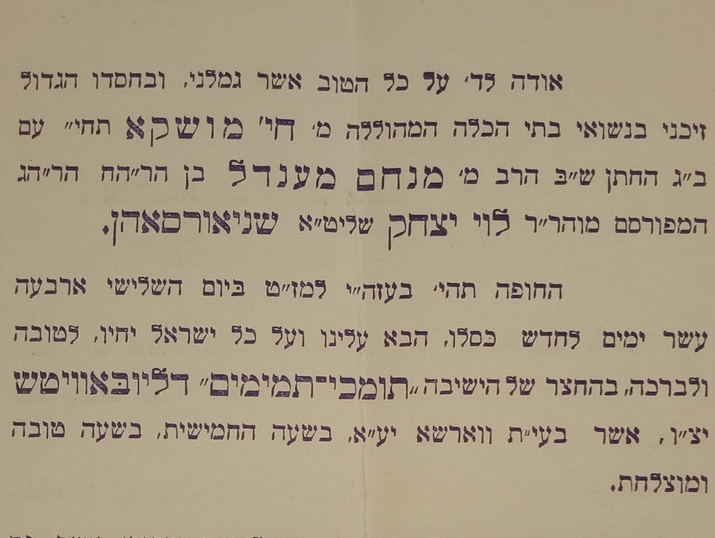 On the fourteenth of Kislev 5689 (November 27, 1928), following an uncommonly long engagement, Rabbi Menachem Mendel and Chaya Mushka Schneerson were married at the Tomchei Temimim Yeshiva in Warsaw. The groom was then a student at the University of Berlin. The bride lived with her parents in Riga. Her father, Rabbi Yosef Yitzchak Schneersohn, the sixth Lubavitcher Rebbe, had been persecuted by the Soviet authorities for his religious activities and, following his recent release from prison, fled the Soviet Union, never to return.

The wedding would become a watershed event in 20th century Jewish history, paving the way for the groom to eventually succeed Rabbi Yosef Yitzchak as Chabad’s leader. Over the course of nearly half a century, Rabbi Menachem Mendel, known as the seventh Lubavitcher Rebbe, or simply “The Rebbe”, would turn the Chabad Movement into a household name, with educational and outreach activities across the globe.

Nonetheless, “At this early date, it wasn’t at all clear that Rabbi Menachem Mendel would eventually succeed his father-in-law as the Lubavitcher Rebbe. In hindsight, we see that not only did he become the rabbi of Lubavitch Hasidism, but without a doubt one of the most famous Hasidic and even Jewish figures, known throughout the entire world,” says Rabbi Dr. Zvi Leshem, head of the National Library of Israel’s Gershom Scholem Collection for Research in Kabbalah and Hasidism.

The site of the wedding reflected the times. Despite the fact that neither the bride nor the groom had any particular attachment to Warsaw, it provided a relatively central and prominent location not under Soviet rule to celebrate the marriage of the Lubavitcher Rebbe’s daughter to a celebrated Torah scholar.

According to Leshem, “In the 1920s, under the growing anti-Semitism and anti-religious persecution of the Soviet regime, Hasidim, of which Lubavitch was a major group, found themselves under increased persecution. As it became increasingly difficult to have a Jewish lifestyle under these conditions, some Hasidim emigrated to the West or to Palestine and those who stayed were forced underground. Obviously in such a situation, the eventuality that families would be separated became quite common.”

While the crowd at the wedding included many notable rabbis and communal figures, two guests of honor were conspicuously absent – Rabbi Menachem Mendel’s own parents, who were prohibited by the Soviet authorities from attending. The hope that they might ultimately be able to come has been suggested as a potential cause for the couple’s extended engagement. Stuck in Yekatrinoslav, Ukraine, the groom’s parents famously insisted on holding a celebration for hundreds of guests at their home.

Many others could not attend, and so a few slightly different versions of the invitation were prepared, including one for invitees who could not physically attend the wedding, but who were nonetheless invited to celebrate from afar.

One such invitation has recently been discovered in the archive of Levi Yitzchak Schneersohn, a cousin who had moved to Palestine at a young age. He became active in the legendary “NILI” underground organization, serving as a liaison between its operatives and British intelligence during World War I. According to his own account, he even coined the name “NILI”.  Following the war, he reported on Arab affairs throughout what is today Israel, Jordan, and Syria. A prolific writer all of his life, Levi Yitzchak composed poetry (largely in Russian), and published two books: an autobiography detailing his time in the NILI underground, and an early history of the city of Hadera.

Both Levi Yitzhak and Rabbi Menachem Mendel were born in Russia, descendants of Rabbi Schneur Zalman of Liadi, who founded Chabad in the 18th century. Besides that, their stories seem to share very little in common: one, a relatively unknown Zionist activist and writer; the other, one of the most important figures in modern Jewish history.

Nonetheless, given the emphasis “The Rebbe” placed on connecting all Jews despite their differences, it seems somewhat fitting that just prior to the 25th anniversary of his death, rare evidence of a seminal event in his life has appeared among the personal papers of an Israeli cousin who lived a life so different than his own.

The Levi Yitzchak Schneersohn archive has been reviewed and described thanks to the generous support of the Leir Foundation.

Thank you to Rabbi Dr. Zvi Leshem and Ivgi Slutzk for their assistance in preparing this article.

The Sufi Freedom Fighter Who Inspired the Lubavitcher Rebbe