The journey of the "Rothschild Haggadah" began 550 years ago with the artist Yoel ben Shimon in Northern Italy and ended in Jerusalem, the capital of the Jewish people 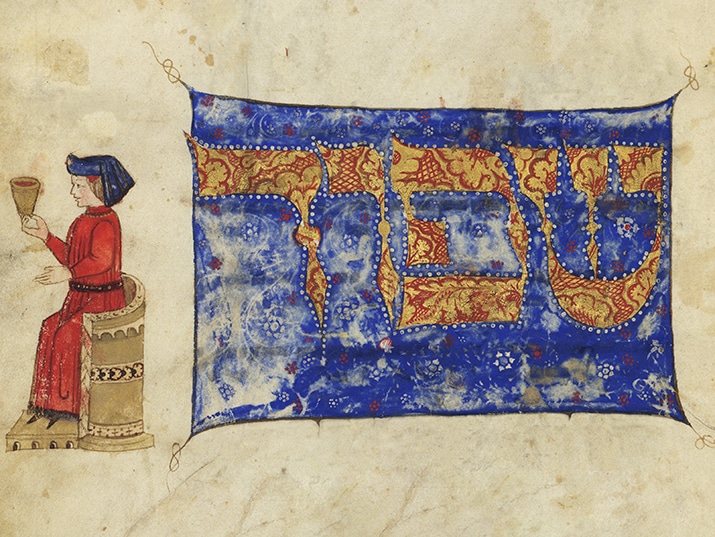 The patriarch of the Rothschild family, Mayer Amschel, collected and traded ancient coins. His five sons who inherited the family estates and businesses after his death had more of an affinity for ancient illustrated manuscripts than coins. During the 19th and early 20th centuries, the descendants of the family who resided in various European cities amassed a large collection of manuscripts, along with other works of art.

One of the foremost collectors was Baron Edmond de Rothschild. “The Famous Benefactor”, as the Baron was referred to in the Land of Israel, began to collect books while he was still in his twenties. Edmond added dozens of manuscripts to the forty or so he had inherited from his father. The majority of these were Christian texts or historical novels, but as an observant Jew he also collected Jewish manuscripts. He owned 14 of these handwritten works, including two Bibles, several Passover Haggadot and a festival prayer book from 1492. His most famous Jewish manuscript is “The Rothschild Miscellany” which is currently stored in the Israel Museum in Jerusalem.

The Baron died in Paris in 1934, leaving behind three children. James, the firstborn, had emigrated to England before the First World War. After his father’s death, James sent an expert antique dealer to France to appraise the manuscript collection and to divide it up between James, his brother Maurice, and his sister Miriam (Alexandrine). The dealer drew up a detailed list of over 100 items along with their monetary value. Most of James’ share was sent to his estate in England. Among his collection were several special Passover Haggadot. After the manuscripts were divided between the Rothschild children, for reasons which remain a mystery to this day, James Rothschild decided to leave 6 Hebrew manuscripts from his collection, including several Passover Haggadot, in France.

One of these Haggadot contains some 50 pages written in quadratic Ashkenazi script, accompanied by dozens of colored illustrations. Some of the wonderful illustrations in this Haggadah are connected to the text itself, and some contain motifs connected to the Haggadah and the story of the exodus from Egypt – the ten plagues, matzah baking, and more.

This Haggadah would later become known as the “Rothschild Haggadah.” Some of the illustrations in the Haggadah provide details regarding its source. The cities of Pithom and Ramses appear as late gothic architecture, reminiscent of Northern Italian fortresses. The figures depicted in the Haggadah are also dressed in clothing typical of Northern Italy. The illustrator’s name does not appear, but the style is reminiscent of that of a famous illustrator named Yoel ben Shimon. Information taken from other manuscripts show that Yoel ben Shimon was active in the second half of the 15th century in the cities of Modena and Cremona in Northern Italy.

Some of the illustrations are rather amusing. The wise son is seen picking his nose. This could be a play on the words of the response he receives “and you should say to him” [v’af ata emor lo – af in Hebrew also means nose].

Another strange illustration appears underneath the song Dayeinu. The illustration depicts a gentile drinking himself into inebriation and warming his bare feet next to a bonfire, upon which he is roasting raw meat which does not seem particularly kosher.

The scribe who transcribed the Rothschild Haggadah was probably named Yehuda. He decorated and emphasized his own name in red in the words of the Hallel prayer, “Hayta Yehuda L’Kodsho”.

The liturgy of the Haggadah follows early Ashkezani tradition, differing slightly from the liturgy we are familiar with today. During the Middle Ages, the rabbis debated whether a blessing should be recited for the Hallel prayer included in the Haggadah. The accepted practice today is not to recite a blessing, but the transcriber of the Rothschild Haggadah appears to have followed the opposing opinions and began the first half of the Hallel prayer with the blessing “to complete the Hallel“. The songs sung at the end of the Haggadah, Echad Mi Yodea and Chad Gadya do not appear, rather the transcriber of this Haggadah instructs the reader to drink the fourth cup of wine at this point. The Haggadah ends with the words slik Ma Nishtana (“Ma Nishtana has been completed”), as in this period, Ashkenazi communities referred to the entire Haggadah by the name of the well-known song which features the question – “why is this night different from all other nights?”

When the Nazis entered Paris on June 14th, 1940, they immediately set their sights on the local riches. The Nazi pillagers mainly stole property of entities marked as “hostile,” such as Jews. A short time after the occupation was completed, the chief ideologue of the Nazi party, Alfred Rosenberg, sent two representatives to locate and collect libraries of such hostile entities. They were Walter Gruta – director of the central library in the Advanced School of the NSDAP (Hohe Schule der NSDAP), and Wilhelm Grau – director of the Institute for Study of the Jewish Question in Frankfurt.

Maurice Rothschild hid the manuscripts in his possession in a safe in a Parisian bank. On January 21st, 1941 the Nazis broke into the bank safe and removed the treasures. A German officer left a receipt in the bank which stated the date and wrote that six crates had been taken. The Germans then went to the Rothschild estate where they continued their looting. Among the manuscripts taken was James Rothschild’s illustrated Haggadah.

In addition to the libraries of Kol Yisrael Chaevrim, the Rabbinical Seminary and other libraries, Rosenberg’s experts (members of the Nazi ERR organization) working in Paris also confiscated the private libraries of the Rothschild family, as well as 760 crates from the Rothschild Bank Archive which contained material from the past hundred years.

The books stolen from the Rothschild family were sent together with hundreds of thousands of other books taken from libraries throughout Western Europe, to Germany, where they were divided between the Institute for Study of the Jewish Question and the Central Library and sorting center of the Advanced School of the NSDAP, in Berlin.

All the books and manuscripts were evacuated from the German city centers due to the allied air raids, and many of them were discovered by American forces after the war in Hangen (Germany), by British forces in Tanzenberg (Austria) and by the Russians in Raciborz (Silesia). The Americans and British returned the books to their original owners, when possible. The Russians took the books they found with them to Minsk and Moscow. It was not until the 1990s that the Russians finally returned some of the Rothschild collections to the family.

After the war, manuscripts belonging to the Rothschild family began to be discovered in Berlin, in Neuschwanstien castle and in Berchtesgaden near the Austrian border. Hermann Goering, the number two man in Nazi Germany, was an art lover. In Berchtesgaden, Goering amassed a tremendous collection of works of art he stole throughout Europe. Some of the Rothschild family assets may have come into his possession.

When the battles ended, the French army published a series of thick volumes with lists of items of art stolen by the Nazis during the war. The three Rothschild siblings sent lists of manuscripts which had been stolen from their collections, which can be seen in the seventh volume.

Years passed, and only some of the manuscripts were found and returned to James, Maurice and Miriam.

In 1948 Dr. Fred Murphy bequeathed a Haggadah which had come into his possession to the rare books collection of Yale University. The University referred to the Haggadah as the “Murphy Haggadah”, named after its donor.

On the back page of the binding of the manuscript is a small simple stamp of the name William V. Black. The genealogy database website My Heritage shows that several soldiers with this name served in the Second World War. This Haggadah may have been found by an American soldier with this name (or another) who brought it back from Europe at the war’s end. Perhaps Professor Murphy received it from him.

It was not until 1980 that Professor James Marrow, a researcher of art history at Princeton University identified this book as one of James Rothschild’s lost Haggadot. James had died in 1957, so Yale University gave the Haggadah to his widow Dorothy in England. Baroness Dorothy decided to bequeath the valuable manuscript to the National Library in Jerusalem.

Three leaves were missing from the Haggadah. Two of them contained the end of the “Kadesh”, “Urchatz“, and “Karpas” sections and the beginning of the “Maggid” section of the Seder service.

In 2007, two illustrated leaves of a Passover Haggadah were auctioned in France. The antiques dealer who bought them sent them to Jerusalem to be examined. In 2008, Dr. Evelyn Cohen, an expert in illustrated Jewish manuscripts, identified the two leaves as the missing leaves of the “Rothschild Haggadah”. The leaves were purchased for the National Library and returned to their rightful place in the Passover Haggadah.

The journey, which began 550 years ago with the illustrator Yoel ben Shimon in Northern Italy, ended with the Haggadah being scanned by the National Library in Jerusalem, making it accessible to anyone who wishes to see it.

The Illustrated Prague Haggadah from 1556