Does trouble keep coming your way? Maybe it's just bad luck, or perhaps it's those pesky demons again…In any case, it's important to act quickly! That's why the National Library keeps a collection of magical demon-exorcising bowls created by Babylonian Jews! 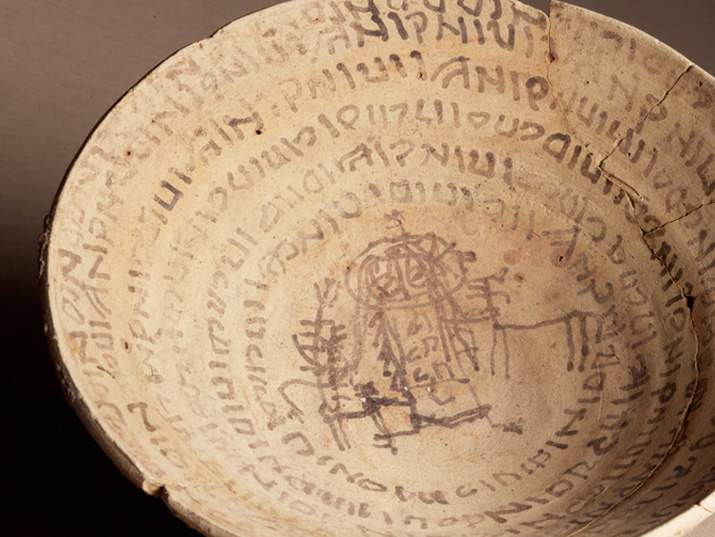 Babylon. The middle of the first millennium CE. An individual gets up in the morning, suffering from a stomach ache or any other pain that may prevent one from leaving home and “earning one’s bread.” So, what does one do? At the time, in Babylon, there were several options: one could consult with the elders, visit the nearest doctor, pray to the heavens above or… order a magical bowl to capture the demons trapped inside oneself.

The Jews of Babylon were not the only ones who created and purchased magical exorcism bowls. Between the fifth and eighth centuries, Babylon was flooded with enchanted bowls used for capturing demons. There is reason to believe that the Jews were considered experts in the field, as over sixty percent of the magical bowls that have been found to date had their spells inscribed upon them by Jewish “wizards,” for the use of both Jews and non-Jews.

Each bowl was made by hand and no two bowls were identical, though some of the same patterns and formulas do appear on many of them. Most of the bowls were made specially by pre-order for specific owners, whose names were inscribed on the bowls themselves. Bowls were often buried under the floor of a house to protect the owners, family and property from attacks by malicious demons.

Incantations were written on the bowls in three ancient Aramaic dialects – Jewish Babylonian Aramaic, Mandaic and Syriac. The text was usually inscribed on the inside of the bowl in spiral form, from the center outwards. Sometimes drawings were added to illustrate the efficacy of the magic, such as an image of a bound demon, a wizard or some other heroic figure wrangling the evil demons. Today, we know of more than two thousand such magical bowls located in museums and private collections around the world. Most of them are preserved away from the public eye.

How, then, did the Library come into possession of several of these bowls? Recently, seven of these rare enchanted objects were donated to the National Library of Israel by collector Avigdor Klagsbald. These seven joined another single bowl that is part of the Gershom Scholem Collection, donated many years ago by the famous scholar of Jewish mysticism. The bowls are among the oldest items in the Library, and here you can have a look at them…

This bowl was donated by Gershom Scholem. The inscription tells the story of a character named Smumit, who lost her sons at the hands of a demon called Sydrus. She fled and built herself a fortress, where she gave birth to another son. Unfortunately, Sydrus managed to enter the fortress and kill this newborn child as well. When Sydrus’ crime was discovered, he fled. At this point, came a heavenly intervention: Four angels – Soni, Sasoni, Sangri, and Ertico – pursued and caught the demon. When they were about to kill him, he swore not to harm the children of the bowl owner wherever the names of the four angels were mentioned. There are certain connections between this story and the story of Lilith, the first wife of the biblical Adam, an infamous demonic murderer of children, which appears in the medieval work Alpha Beta deBen Sira. The names of the first three angels can still be found today, in a slightly altered from, in amulets and talismans intended to protect pregnant women. In the center of the bowl is a drawing of an unidentified figure. The story of this bowl was originally published in 1985 by Joseph Naveh and Shaul Shaked. It was brought to light again recently in the work of James Nathan Ford.

The inscription on this bowl is written in the Mandaic language, which is a dialect of ancient Aramaic spoken in Babylon by members of the Mandaean community. The incantation is directed against a long line of Lilith-like demons, each with a different name. On one side of the bowl we can spot the figure of a demon, perhaps one of those from which the owner of the bowl, Zadoi Ben Dadai, sought protection. These bowls are the earliest evidence of the culture of the Mandaean community, which exists to this day.

This bowl barely survived the arduous journey to Jerusalem. It was reassembled from several fragments, but one of the pieces is clearly still missing. The inscription on the bowl, written in Jewish Babylonian Aramaic, is an appeal to a large number of angels to protect the house and its inhabitants. A demon with long hair, bound by its hands and feet, is featured in the center of the bowl.

To the Library’s collection of magic bowls   This article was written with the generous assistance of Dr. James Nathan Ford of the Department of Hebrew and Semitic Languages at Bar-Ilan University.   If you liked this article, try these!