These methods will help you discover if you are in possession of an ancient book containing mystical powers, or perhaps not 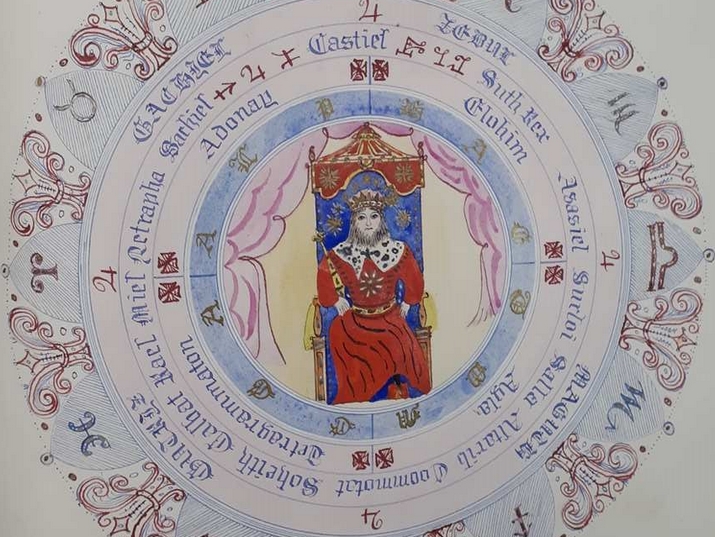 “The Key of Magic of Rabbi Solomon,” an 18th-century manuscript that remarkably claims to be a work by King Solomon

Pseudepigraphy is not a Jewish invention, but resonances of this form of writing, which attributes later works to familiar and important historical figures, can be found already in the Bible.

It is not difficult to imagine the reason that prompted many later authors to omit their own names from various exquisite manuscripts created over the centuries. Why would scholars and mystics from a society that sanctifies traditions thousands of years old be interested in the writings and prophecies of unknown persons, when they might pay good money to purchase a work that was only recently “discovered” and contains the words of such luminaries as Rabbi Shimon Bar Yochai (author of the Zohar), the Abraham the Patriarch (Sefer Yetzirah [“Book of Creation”]), or even the musings of Adam himself (The Book of the Angel Raziel).

For centuries, readers have had to decide whether to accept or reject the claim of authorship of a particular work ascribed to a great figure, relying primarily on their gut feeling. Today, with advances in historical research, a researcher wishing to date a suspicious work claiming ancient authorship often uses one of the four following questions to get at the truth.

First, what is the earliest mention of the work under investigation? It may not necessarily be the work itself, but its citings in other sources. The more removed this reference is from the period it is attributed to, the less likely it was composed then. It is rare that a work written by an important figure disappears without leaving any trace, and rarer still that it “suddenly” appears, hundreds or even thousands of years after the death of its author.

Second, what is the language of the work and is it compatible with what we know about the language spoken by the author it is attributed to? It is not enough to know, for example, that Aramaic was the language spoken by Rabbi Shimon Bar Yochai, in order to conclude that he was the author of the Zohar (the primary text of Kabbalistic tradition). While the Zohar was indeed written in Aramaic, this ancient language has a range of different dialects, each attributed to a different period.

Third, what is the story surrounding the circumstances of the writing and discovery of the work, and does this story make sense to us today? Needless to say, dream revelations or transmissions through supernatural means are incidents that historical researchers find difficult to accept today.

And the last and most important question of all – Is the content of the work compatible with what we know about the period in which it is claimed to have been written?

Now that we have laid out the research framework, let’s apply it using this suspicious manuscript—an eighteenth-century copy of a mysterious work known as “The Key of Magic of Rabbi Solomon.” 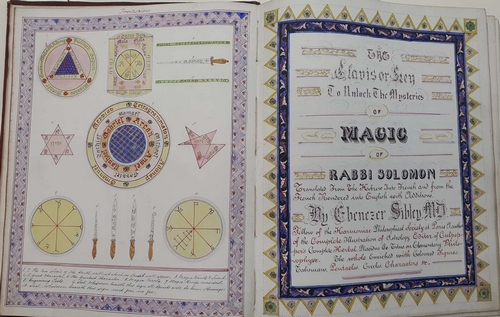 This manuscript purports to be a magical work describing various ways to enlist the powers of supernatural beings—angels, demons, and other higher spirits. The copy we will consider is preserved in the National Library collections.

The Secrets of Rabbi Solomon

Earliest reference: Locating the earliest reference of a work is almost always the most complicated task, and this was no exception. The Hellenistic Jewish historian Flavius Josephus, was apparently the first to link the figure of King Solomon to his with magical practices. Josephus writes in his book Antiquities of the Jews that the heir to the throne of King David authored more than three thousand books, including several that dealt with the exorcism of demons.  It is possible that here Josephus is relying on works of magic that were widespread in the ancient world and were attributed to King Solomon.

However, the earliest mention of the particular work before us is not found in antiquity and certainly not in the biblical period. It can be traced back to thirteenth-century Europe. The example in the National Library is a copy of a text found in a notebook belonging to the estate of Ebenezer Sibley, the renowned eighteenth-century naturalist, who also dealt with “deeper truths”—meaning the occult.

The language of the work: There is a clearer hint here. The manuscript in the National Library is written primarily in English—a language that did not exist at the time of Solomon. In the introduction to the work, Sibley claims that the book was first written in Hebrew, translated into old French and from there into English. Study of older manuscripts of “The Key of Magic of Rabbi Solomon” contradicts this claim, proving that the original language of the work was Latin. Could a biblical figure who lived in the tenth century BCE, even the wisest among them, have been fluent in Latin? Common sense says no. However, this particular individual was also said to be capable of conversing with animals, so who knows? 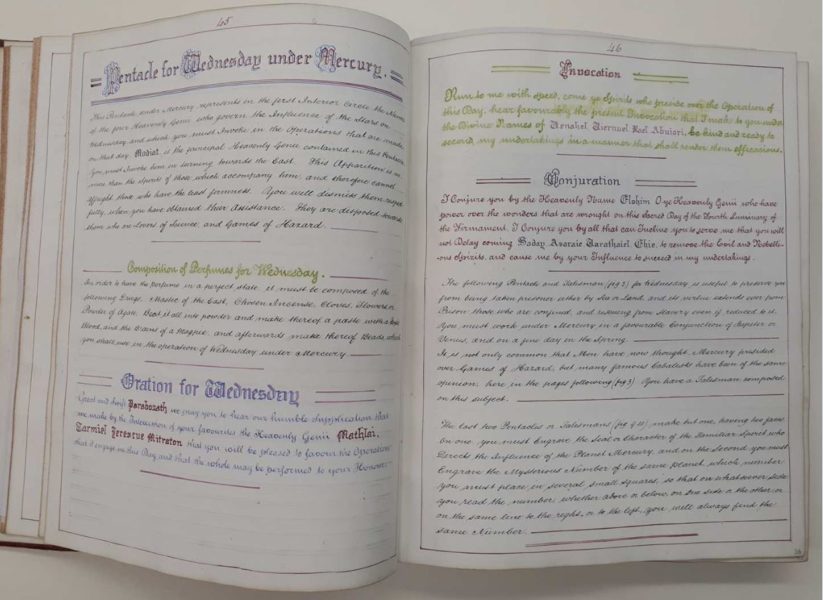 The story behind the work: Contrary to the norm with a work that is “discovered” after thousands of years of being lost, the copy in the National Library does not boast an origin story about the treatise or its later discovery. To better understand the background story, we will have to look at other, earlier manuscripts of the work.

Many of them contain different versions of the story, but if we remove all of the various embellishments we arrive at the heart of the matter: Towards the end of his life, Solomon compiled a book for his son Rehoboam (some versions claim the work was a joint collaboration). The magical book by Solomon was buried with him and a version of it was discovered a thousand years later. The attempt to decipher the work frustrated those involved and they turned to divine help, which appeared in the form of an angel. The angel agreed to interpret the text, provided that the interpretation did not fall into the hands of unworthy readers, who were either wicked or lacking in their faith.

As mentioned, this story does not appear anywhere in the Library’s copy of “The Key of Magic of Rabbi Solomon” and was apparently omitted from all the later versions of the work.

The content: It seems that herein lies the answer that may undermine the belief of those who are convinced of the work’s authenticity. Simply stated, this hundreds-of-pages-long book is a magical manual that provides clear and simple ways to summon spirits and make them fulfill the wishes of the conjurer. The mystical summoning of souls occurs in a number of ways, with the main one being the use of spells and incantations, and the drawing of various mystical symbols such as the pentacle. There is also the possibility of turning to various mythological creatures such as nymphs and satyrs or conversing with spirits face to face (which very few can do). 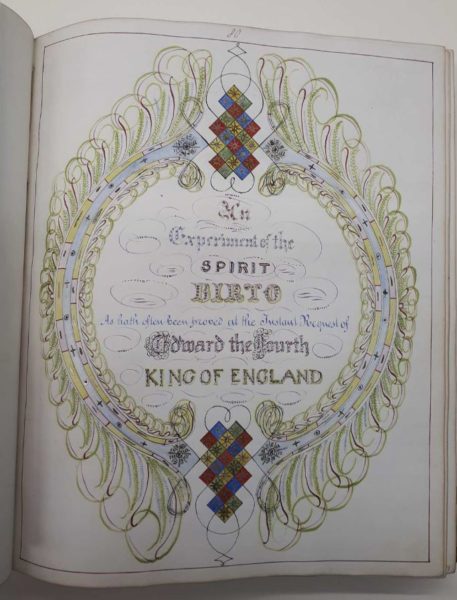 This abundance of creatures, powers and symbols points toward the varied sources from which the author of the work drew his inspiration. Alongside the biblical figures—angels or human—are creatures from Greek and Roman mythology, in combination with crosses and other Christian symbols. In addition to all this are the names of many superhuman beings that have no parallel anywhere other than in this work.

How could King Solomon be aware of all these mystical and mythological symbols, most of which did not exist in his time? The answer to this question is not to be found in any copy of this work, however ancient and “authentic” it purports to be.

This article was written with the help of Gal Sofer and Dr. Yoel Finkelman.   If you liked this article, try these: How to Buy a Jewish Manuscript in Four (Not So) Easy Steps Micrography: the Art of Drawing with Letters The Rescue of One of the World’s Most Beautiful Haggadot