Stories, symbols and the nature of God concealed among Hebrew letters 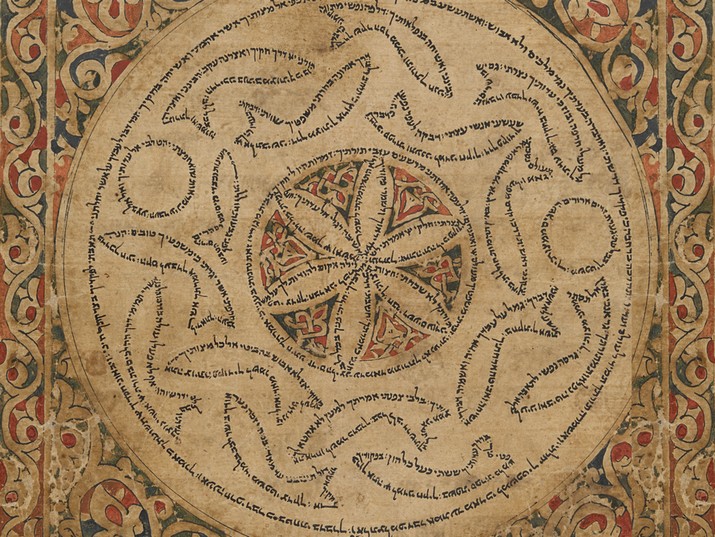 Writing in tiny script is known from as early as the second millennium BCE where it is found on small Sumerian clay tablets, little more than an inch long, and from descriptions by first century CE Roman historian Pliny the Younger, but the word micrography is most commonly applied to a unique Jewish art form that uses miniature script to fashion decorative outlines.

Hebrew manuscripts of the Bible are often adorned with micrography, a unique Jewish scribal art that creates the contours of decorative forms using tiny script. The texts used to create the micrography were usually taken from the Masoretic text, a lexical text that served mainly to stabilize and preserve the accuracy of the Hebrew Biblical text.

Preparation of the Masoretic text began apparently somewhere between the seventh and beginning of the eighth centuries CE. The earliest examples of micrography decoration are found in Hebrew manuscripts from the Middle East which feature geometric designs that include architectonic structures, mainly arches.

The use of text to create forms led scholars to suggest that “carmina figurata” served as the visual inspiration for micrography, which is often referred to as “Masorah figurata” in academic literature. Nevertheless, some major differences challenge the validity of this claim. The most significant being that whereas in micrography the text is written along the outline of the desired form, in carmina figurata, a form is created by writing lines of text of differing length one below another, while remaining within the confines of the outlines.

In addition, the carmina figurata is a visual embodiment of the content of the poem forming a direct relation between text and image. Though there are a number of examples of micrography that are created in similar fashion, there is no direct link between the decorative image and the text used in its making.

On the other hand, some aspects of Islamic art attest to it being the main and most influential visual source for the decorations appearing in Hebrew manuscripts, including micrography. Dan Pagis suggested that the aesthetic emphasis and formal sophistication of Jewish calligraphy, combined with the Masoretic tradition, provided a ready platform for the absorption of Islamic calligraphy and this can easily be compared in early Hebrew and Islamic manuscripts.

In manuscript Bibles with Masoretic text two sizes of script are used on the same page: the Biblical text is written in two or three columns in large, quadratic script and the Masoretic text is inserted in semi-square micrographic script in between the columns and on the upper and lower margins of the page. In Sephardic Masoretic manuscripts, the micrography is generally not larger than a millimeter, which sometimes makes it difficult to see that the decoration is made from script. In Ashkenazi Bibles, on the other hand, the micrography is much larger and easier to read.

In the past, the prevailing view among researchers was that since there was no direct connection between the micrographic decoration and the text that it decorated (an exception being certain manuscripts from the late middle ages, and even these were rare), it was not essential to read the micrographic text in its entirety.

More recent research suggests that reading the text of the micrography is a methodological requirement as it can deepen understanding of the scribe’s writing style as well as characteristics of the writing flow in which the scribe created the decorative forms, which in turn, might reveal the correlation between the image and the text used to create it.

This elaborate manuscript from Yemen, dated to 1469, known as the Sana’a Pentateuch, included a carpet page decoration inspired by the Islamic artistic tradition.

The opening carpet pages are similarly adorned, but feature slight variations in the decorative layout of the central micrographic element. Every carpet page includes a micrography decoration in the form of a rose in the center surrounded by concentric circles with five pairs of fish swimming in a circular motion between them. The entire circle is anchored, top and bottom, by triangular shapes that evoke mountains. The background is filled with a black and red filigree design. The decoration itself reflects cosmological and Islamic concepts that describe the sun in the center, followed by the sea, and finally, the earth.

The micrographic text here is taken from Psalm 119 which speaks of the relationship between man and the Torah. Given that the Torah is perceived as a diagram of the universe, these decorative forms might point to the symbolic connection between word and image. Symbolic connections are indeed found in the micrography decorations of older Middle Eastern manuscripts as well, as researcher Rachel Millstein has shown.

There are three instances where micrography appears in manuscripts other than bibles: the Rylands Haggadah, the Mocatta Haggadah and the Catalan Mahzor (High Holiday prayer book), which is kept in the National Library of Israel.

The Mahzor, a singular example of a manuscript prayer book decorated in micrography, includes twenty-three full-page decorations. The text making up the micrographic decorations in this manuscript is mostly from Psalms. The lucidly written text and the many commentaries make it easier to identify the link between text and image. A clear example of this is folio 5a depicting a dog catching a rabbit by its heel composed from the words of Psalm 22. The psalm describes a tortured and suffering figure, whose enemies are compared to a dog and lion chasing the narrator awaiting his death. In Jewish art the persecuted Jewish people are often compared to a hunted deer or rabbit.

Folio 3a contains a mandorla surrounding a fleur-de-lis. Four long-necked birds surround the mandorla. The image evokes the Maiestas Domini, the Kingdom of Heaven on Earth.

In Christian art, this image is based on descriptions of the throne of God in the books of Samuel, Ezekiel and the Apocalypse of John. In this iconography, Jesus is portrayed seated on a royal throne within a mandorla which is supported by four angels or the four evangelists seen in the corners of the image. The mandorla, a familiar symbol in antiquity, is formed from two partially overlapping circles that symbolize the interaction and reciprocity between the heavenly and corporeal worlds: the divine and the human. In Christian art, this almond shape (mandorla means almond in Italian) was used as a means to describe the divine figure in all its glory,  and can be found in depictions of Jesus at the Last Judgment and of Mary. This central image was widespread in Christian art from the sixth century onward.

The image of Christ in Majesty was prevalent on church facades and in manuscripts of the time of the Mahzor‘s production. We can presume that the Catalonian scribe, who was also the artist of the Mahzor, would have worked in a prominent Christian manuscript workshop in Barcelona and had access to the familiar workshop models. The artist would have used these Christian templates and by emptying them of their Christian content, he turned them into a polemic tool against Christianity itself. To understand the image it is important to identify the changes the scribe made to the Christian prototype and the text out of which he created the image.

In the image of the fleur-de-lis, the scribe used Psalm 145, which comprises the main part of the verses Ashrei yoshvei veitekha (Happy are they who dwell in Your house), the most important psalm in the Psukei dezimra (Verses of Praise, that may be recited during the morning prayer). To form the mandorla, the scribe doubled verses 15 and 16 on the left side. This graphic effort enabled the abbreviated Name of God appearing at the beginning of verse 17 to be inserted in order for it to form the gemstone at the center of the upper crown. It is interesting to consider this upper crown in relation to Kabbalistic notions of Ein Sof.

In this sense, what then is the significance of the small downward-pointing crown, at the bottom, opposite the large crown? This crown can be viewed as the atarah, a term used by Nachmanides and his students for the shekhina (the dwelling place of God, representing the feminine attributes of the presence of God). Reading the image in this way, we can suppose that it reflects a manipulation of the text, a kind of theological/theosophical sermon, responding to one of the central questions in the polemical discourse of the period, that is, the nature of God. While the sefira hokhma is the emanation of the highest crown and in its essence is the first to be revealed, malkhut, the shekhinah, after its descent to the bottom of the ladder of the sefirot, is the first of the created universe to be separated from the divine. The shekhinah is then a mirror reflecting the heavenly light in this world that draws its strength from the heavens and is thus the gateway to divine abundance in the world.

To understand the six-petaled fleur-de-lis pictured above, one could infer that along with the atarah, the seven sefirot in this image are the emanation of the created world, and thus, it reveals the Jewish concept of divine order that is expressed in the construction of the sefirot. Moreover, understanding the image in this way indicates that the image was given a structure which would have been clear to the reader.

The transposing of the evangelists or angels surrounding the mandorla in the Christian version with cranes or storks is also significant. Both these birds carry similar iconographic meanings of righteousness and religious devotion. The sages used the image of the stork to symbolize pious individuals (hasids). Therefore, it is possible that the choice of these birds is representative of the pious individual who chooses the right path—follows the commandments—and engages in deeds that preserve the balance and harmony between the powers of creation. In introducing these changes to the Christian model, the scribe has created a visual polemic that argues against Christian theology in the matter of the essence of the Divine, in a depiction that represents the true essence of God through the expression of the sefirot in the world.

These complex visual forms raise the question of why the Masoretic text, which is supposed to preserve the accuracy of the Biblical text, was inserted into a decoration that is so difficult to read?

David Stern has suggested interpreting this art as a visual midrash of Avot [Ethics of the Fathers] 3, 13: “Tradition [Masoret] is a safeguarding fence around the Torah.” This would explain the use of micrography to create the borders that adorn the biblical text. In other words, the decoration creates a visual border that is analogous to the aim of the Masoretic text which is to preserve the accuracy of the Biblical text. I would further suggest that the need to rotate the manuscript in order to be able to read the micrography is another visual midrash of Avot 5, 22: “Search in it and search in it since everything is in it,” a physical expression of learning inherent in the text of the Torah which is expressed in the obligation to turn the page over and over again in order to decipher the connection between text and image and discover the secrets concealed among the letters.